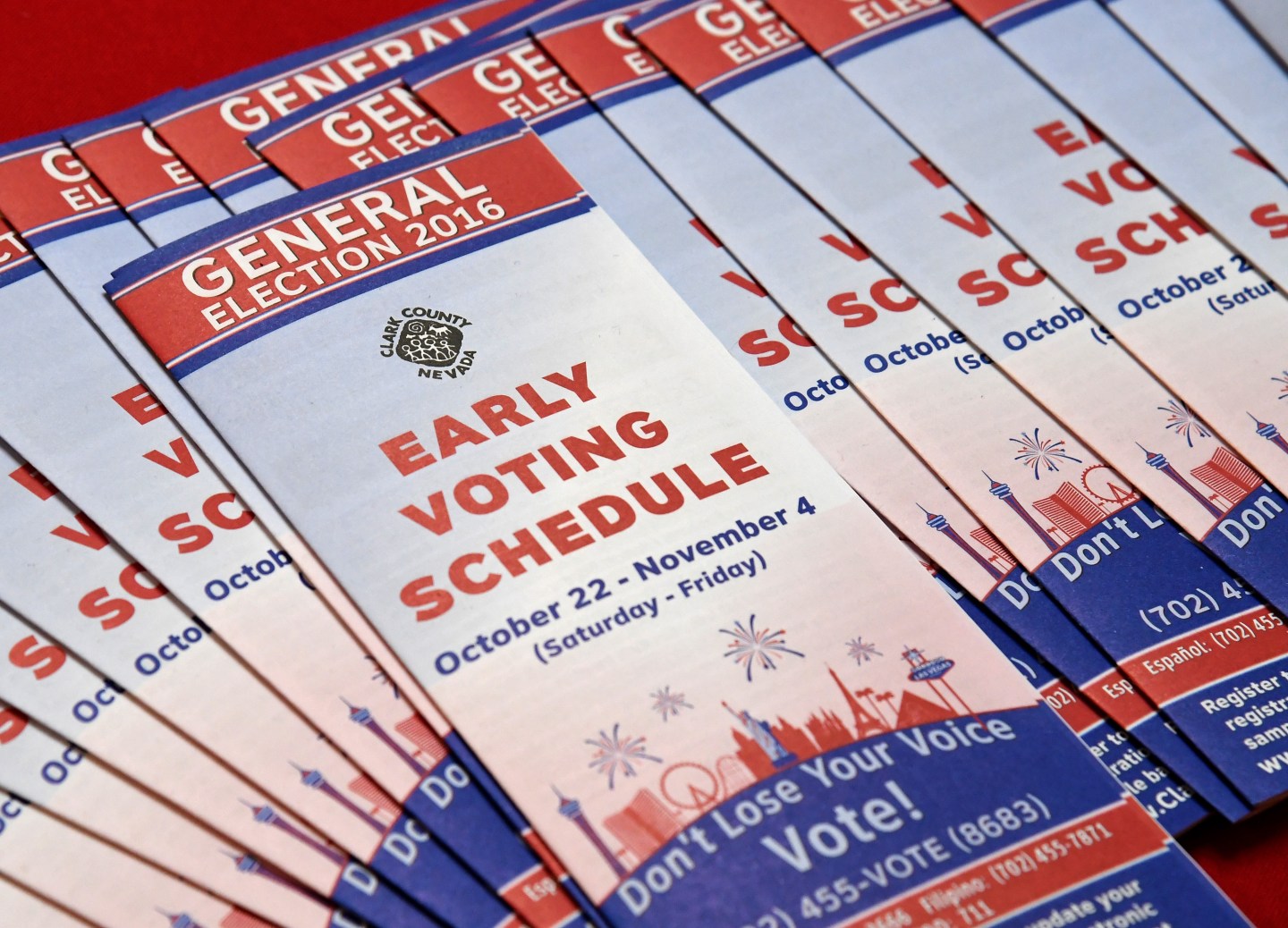 The millions of votes that have been cast already in the U.S. presidential election point to an advantage for Hillary Clinton in critical battleground states, as well as signs of strength in traditionally Republican territory.

The strong early-voting turnout by those likely to support Clinton—registered Democrats, minorities, and young people among others—could leave Donald Trump with virtually no path to the 270 electoral votes needed for victory.

Clinton is showing strength in Florida and North Carolina, both must-win states for Trump, as well as the battleground states of Nevada, Colorado and Arizona. There are even favorable signs for Clinton in Republican-leaning Utah and Texas.

“It’s going to be a very tall order for Trump to win,” said Michael McDonald, a University of Florida professor who specializes in election turnout. Other analysts also point to a strong finish for Clinton based on the early vote.

Early voting, via mail or in-person, is underway in 37 states. More than 13.4 million votes have been cast, far higher than the rate in 2012, according to Associated Press data. In all, more than 46 million people —or as much as 40% of the electorate — are expected to vote before Election Day, Nov. 8.

A look at the latest trends:

The Clinton campaign describes both North Carolina and Florida as “checkmate” states. Trump probably can’t win if he loses either.

After trailing in mail ballots, Democrats surged ahead of Republicans in North Carolina ballots cast after the start of in-person early voting last week. Democrats currently lead in ballots submitted, 46% to 29%.

In-person voting is off to a slower start for both Democrats and Republicans compared to 2012, when Republican Mitt Romney narrowly won the state. But many Democratic-leaning counties reduced the number of polling stations in the first week, a likely factor in the decline. Several of those counties are opening more stations this week.

In Florida, more than 2 million voters have already returned ballots. In-person voting began Monday, and Democrats have pulled virtually even with Republicans, at 41% each. That’s a much faster rate of catch-up than in 2012 and 2008, when Barack Obama won the state.

This year’s numbers are troubling for Republicans.

Once Republican states, Nevada, Arizona and Colorado are in play for Democrats. All are crucial for Trump.

Overall ballots in Nevada are down but the Democratic lead widened after the start of in-person voting last week. Democrats lead in returned ballots, 46% to 35%. Ballots from older white voters declined significantly while those from Hispanics and Asian-Americans rose.

Nearly 70% of all Nevada ballots were cast early in 2012; Obama won the state by 6 percentage points.

Early voting is surging in Arizona, normally a Republican state but one that Clinton has targeted. More than 616,000 ballots have been cast and Democrats are about even with Republicans, 37% to 38%. Another 25% were independent or unknown. At this point in 2012, Republicans led by more than 7 percentage points. Ballots rose in Arizona especially among younger adults and Latinos.

In Colorado, where early voting has been by mail, Democrats led 40% to 34% among the 416,000 ballots returned. In 2012, Democrats trailed Republicans at this point by 10 percentage points. Since then, registered Democrats have surpassed Republicans in the state.

The trends out West may bode well for Democrats in two Republican strongholds.

In Utah, overall ballots are up from 2012, driven by faster gains among voters ages 22 to 49, according to Catalist , a Democratic analytical firm. Republicans barely led in total ballots cast compared to independents, 38.6% to 38.5%. That could mean that Evan McMullin, a third-party candidate, is drawing support from Republicans unhappy with Trump. Democrats still trail at 19.4%, but they’re in an improved position from 2012, when Republicans held a 58% to 13% lead.

Texas began in-person voting Monday. More than 969,000 ballots were cast as of late Tuesday, based on reports from the top 15 counties, a 46% increase. The state did not provide breakdowns by party. The Clinton campaign believes higher turnout, especially among Latinos, could give it an edge.

Boosted by white voters, Trump may still hold an edge in Ohio, Iowa and Georgia — states that still won’t be enough for him to garner the presidency without multiple come-from-behind wins in Democratic-leaning states.

In Ohio, the heavily Democratic counties of Cuyahoga and Franklin continue to show double-digit declines in ballot requests compared to 2012. The state does not break down ballots by party affiliation. By race, voter modeling by Catalist found the white share of Ohio ballot requests was up to 91% from 87%. The black share declined to 7% from 10%.

And in Georgia, which does not report party affiliation, ballots submitted are up from 2012, but mostly among whites.

The white share of ballots rose a percentage point to 66%. The black share fell to 31% from 34%, according to Catalist.