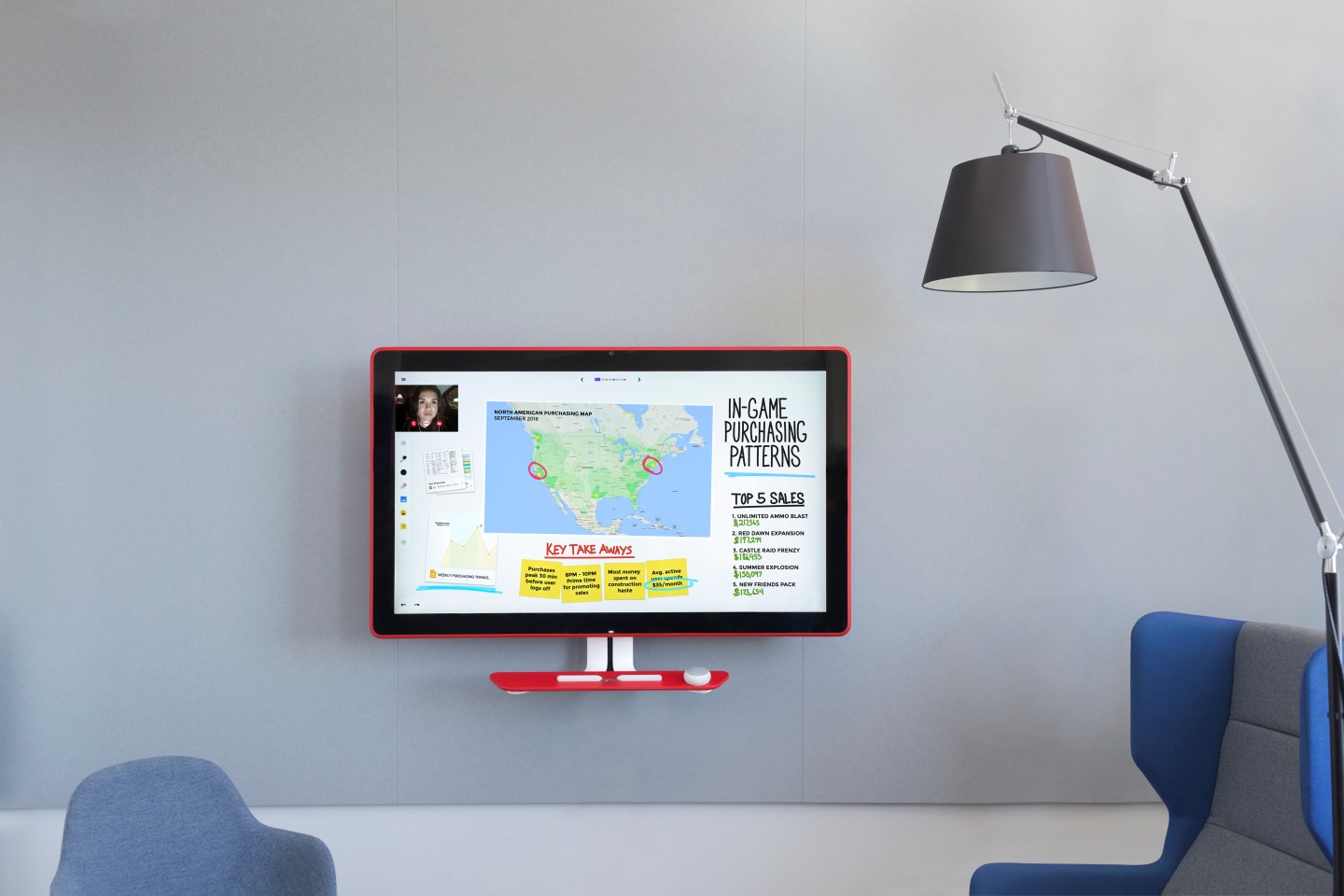 Google has a new plan to win corporate customers, and it involves big, digital whiteboards that workers can write and scribble on like they would on old-fashioned whiteboards.

Google’s last big enterprise-focused business product it sold to customers was its Search Appliance, a hardware device created in 2002 that businesses could hook into their I.T. infrastructure to search for files and documents. In February, Google sent an email to some of its partners and resellers that it would discontinue the Search Appliance as it shifts to selling other cloud enterprise services, suggesting the product failed to resonate with business users.

The Jamboard is designed to work hand-in-hand with Google’s G Suite, its lineup of business-related apps formerly known as Google Apps for Work, including Docs, (word-processing), Sheets (spreadsheets), and Hangouts (online phone calls and text messaging). Customers must use the Chrome browser if they want to use the Jamboard to access the Internet and grab text or images to add to their digital whiteboard presentations. Plans are in the works to eventually have the device display video, said TJ Varghese, Google’s product manager of the Jamboard.

During a Monday press event in San Francisco, several Google executives demonstrated how workers could use the whiteboard for their meetings, even those in which employees may be in multiple locations, with the help of its Google Hangouts app integration.

Other employees who have Apple (AAPL) iOS or Android tablets can also hook up to the Jamboard and tinker with the board through their devices. As of now, there are no plans for Windows-powered devices, like the Surface Pro, to work with the Jamboard, said Google Cloud Vice President of Apps Prabhakar Raghavan.

Microsoft also sells a similar digital whiteboard called the Surface Hub that shares many of Jamboard’s features, like a touch interface, microphones, and a stylus pen. The 55-inch Surface Hub sells for $9,000, while the 84-inch model sells for $22,000.

Google’s Jamboard also has the ability to recognize and clean up people’s handwriting and drawings, by straightening up their lines and circles after they are done scribbling. Users can turn on a feature that can recognize the words written and then convert those words into a computer font.

Still, the Jamboard is in its early days, and it lacks compatibility with current popular work productivity tools like chat app Slack and the cloud document service Box (BOX). Integrations with those enterprise apps will be coming “down the road,” said Varghese.

Additionally, Google created a proprietary file format called a Jam file that will be used to save a customer’s digital whiteboard creations, and can be archived on a customer’s Google Cloud storage account. Google did not say how big the Jam file is.

As of this time, Microsoft (MSFT) Office files like Word docs, Excel Spreadsheets, and Power Point files are not supported. Additionally, the CAD file, a popular file format used by architects, is also not supported. However, customers can export a Jam file to other popular formats, like PDF, so that unsupported products can still access the Jamboard files.

“Our approach to this design is to keep it as simple as a whiteboard,” said Varghese.

The product manager said that undisclosed partners helped Google manufacturer the Jamboard, “but it is entirely a Google design.”