Woman Sues KFC for $20 Million After Not Getting Enough Chicken 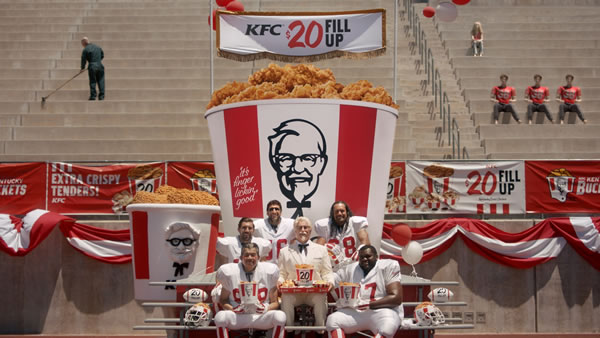 This story has been updated to reflect a response from KFC.

KFC is facing a $20 million lawsuit filed by an incensed customer who says she didn’t get enough chicken in her $20 “Fill-Up.”

Anna Wurtzburger, a 64-year-old retiree of Hudson Valley, N.Y., filed a lawsuit late last month claiming that KFC’s advertising is misleading. The lawsuit, obtained by Consumerist, states that Wurtzburger purchased a $20 Fill-Up and, when she got home, was surprised to find that the bucket was only filled up about half way. Wurtzburger said the commercial for the product shows “an overflowing bucket of chicken.”

When she contacted KFC to draw these differences, a spokesperson explained to her that the advertising is done that way so viewers can see the product. The lawsuit claims that this proves KFC was aware it was “intentionally misleading and deceiving the public when it advertised an overflowing bucket of chicken on television but knew that they would only sell 8 pieces of chicken to the public.”

KFC’s menu states that the $20 Fill-Up comes with eight pieces of chicken, though that information isn’t shared in the commercial. But the commercial does say that it feeds a family of four.

The lawsuit, filed in a New York State Supreme Court, accuses KFC of violating sections of the state’s general business law that prohibit false advertising and misleading trade practices. The plaintiff is demanding that KFC alter its advertising and pay $20 million in damages.

Starbucks (SBUX) recently faced a similar lawsuit that claimed the coffee chain misled customers by advertising drink sizes in fluid ounces, and deliberately adds too much ice to cold drinks to reduce the size of the beverage. A judge dismissed the case, saying that “a reasonable customer” should understand, “as young children” do, that ordering a drink with less ice will result in more liquid.