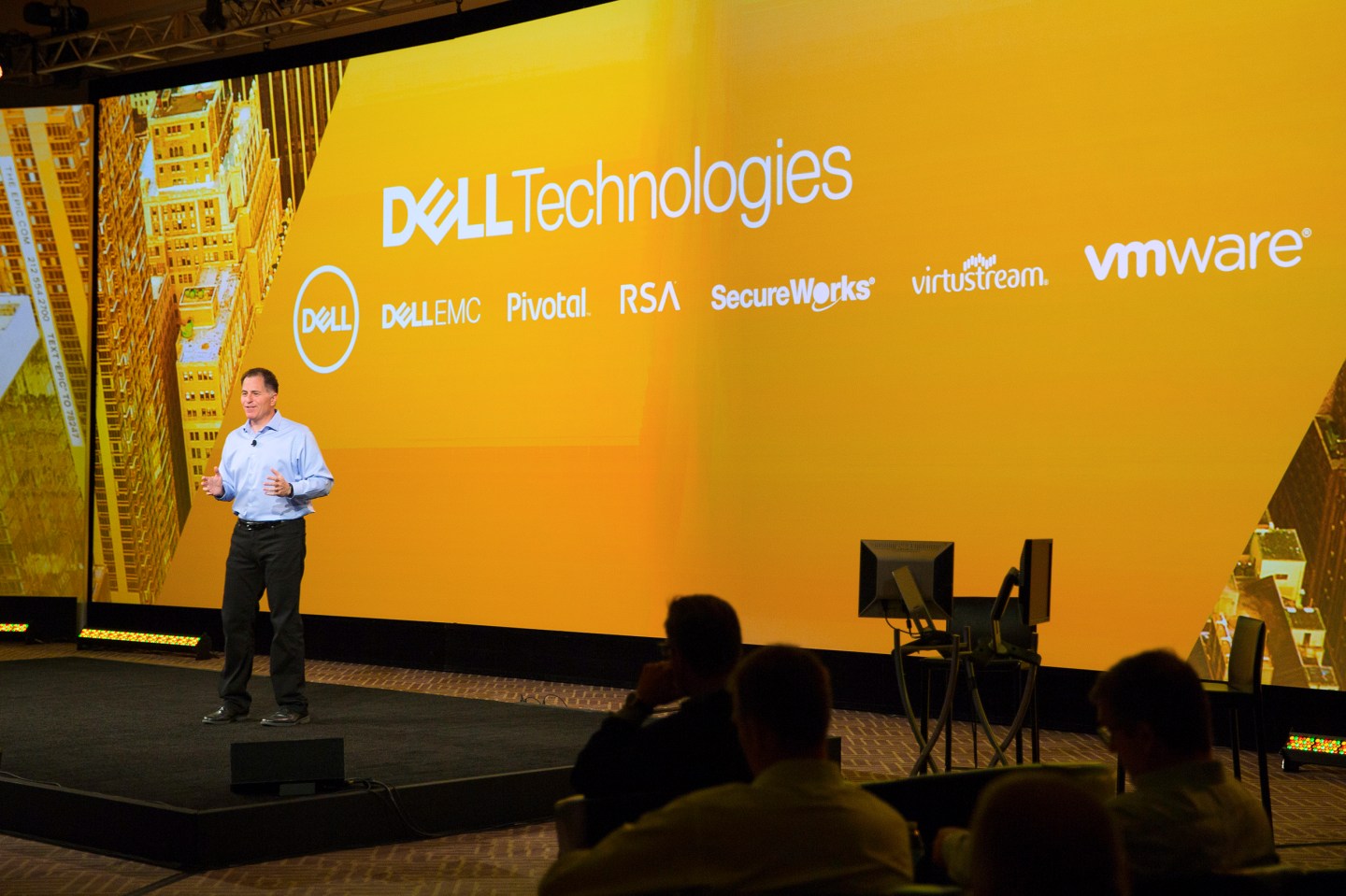 Just over a month after closing the $67 billion deal that combined Dell and EMC into Dell Technologies, chief executive Michael Dell and crew hope to show that the combined company is much better poised to succeed in a rapidly changing tech landscape.

At Dell EMC World in Austin, Texas, the company’s top brass will talk up three key investment areas: hyper-converged infrastructure, software-defined storage, and flash storage. That’s a lot of technical jargon for much of the gear that runs in corporate data centers.

Dell, as a standalone company, was a leader in servers and PCs with a presence in storage—especially storage for small and medium-sized companies. The independent EMC was prominent in storage and related technologies, especially for corporate customers.

Now the combined entity—with an estimated $74 billion in annual revenue—wants to demonstrate that as a result of the largest merger in tech history, one plus one really does equal three, as Jeremy Burton, Dell’s chief marketing officer described to Fortune ahead of the show.

In Dell’s case, hyper-converged infrastructure combines Dell servers with EMC backup software and VMware (VMW) software. VMware is now majority owned by Dell Technologies. That means one piece of hardware can handle compute, storage, and networking tasks, and it can be managed and reconfigured as needed with software.

There has been a great deal of industry hype around converged and hyper-converged data center hardware driven by vendors, including Nutanix (NUTANIX), Simplivity, EMC, and HPE. Converged means tying together discrete parts, such as a Cisco server with EMC storage and virtualization software. Essentially, it’s a looser bundle of gear from several sources.

A “hyper-converged product” pulls all that into one set of hardware from one vendor and, in theory, is more tightly-integrated because everything was built to run together.

Software-defined storage means that storage hardware can be reconfigured and updated via software, meaning fewer hardware upgrades. Dell Technologies will introduce a software-only version of Data Domain’s data de-duplication technology, which can be downloaded and run on a Dell PowerEdge server, according to Burton said. This technology is meant to slash the number of backup files a company needs, meaning it has to store less data and could be a huge cost saver. EMC bought Data Domain in 2009 for $2.4 billion.

Finally, EMC continues to ride the fast flash storage bandwagon, where it competes with upstarts like Pure Storage. Flash—or solid-state storage—stores and accesses data much faster than traditional disk drives or tape, but it’s pricier. Dell EMC unveiled a few new flash products last week in the run up to this event.

Dell Technologies, like rival HPE (HPE), hopes its hardware and software will power customers’ traditional data centers and act as the backbone to various private or hybrid cloud computing scenarios. A private cloud runs on a customer’s hardware, but it’s much more flexible than traditional data center setups. A company running a private cloud can, for example, add or delete computing, storage, or networking power for a given department as needed and then charge that department for that usage.

But Dell Technologies—like HPE, IBM (IBM), Microsoft (MSFT), and other legacy tech powers—increasingly face off against public cloud giant Amazon Web Services (AMZN). AWS runs huge data center farms around the world (another just opened in Ohio), and rents out all that firepower to customers who see its services as a way to augment or even replace their own data centers.

Dell Technologies’s forthcoming offering seems to be that it will work with and around AWS. VMware, for example, just inked a partnership with AWS, a company it had viewed as a top rival. And Virtustream, a business-focused cloud company acquired by EMC for $1.2 billion last year, is all about running existing essential business applications like accounting, inventory, and manufacturing management software from companies like SAP (SAP) and Oracle (ORCL).

For more on Dell Technologies, watch:

Virtustream targets many existing enterprise applications, most of which have been heavily customized to meet certain needs. That customization often carries special requirements, which is not something typically well suited for the AWS world. For the great bulk of new applications built to run on distributed infrastructure, public cloud—namely AWS—is a great choice and often seems to be the conclusion.

Ironically, HPE—which is now painted as the polar opposite of Dell Technologies in that it is getting smaller by selling off enterprise services to CSC software to Micro Focus and perhaps other businesses—has a very similar pitch. That is that HPE can run private clouds better than anyone, as its chief executive officer Meg Whitman told analysts during the company’s annual analyst briefing on Tuesday.

Last month in an interview with Fortune, Whitman referenced the differences between Dell and HPE’s approaches.

“We are getting smaller, they are getting bigger,” she said, stressing that in her view, “smaller” also means more nimble. “It will be fascinating to see in three, four, five years which strategy is better or if maybe they both worked.”