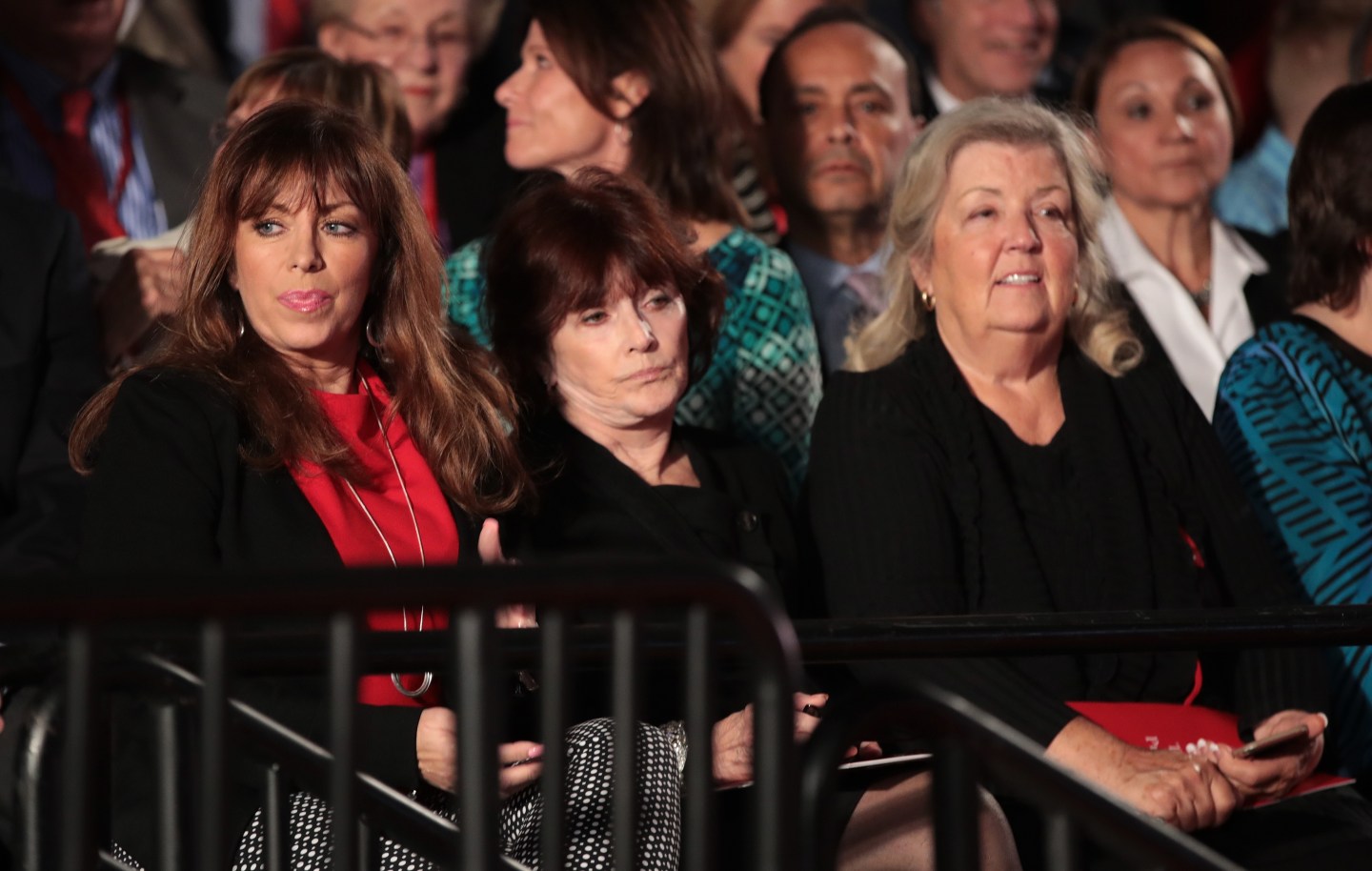 This story originally appeared on Time.com.

Juanita Broaddrick, Paula Jones, Kathleen Willey, and Kathy Shelton all appeared as Donald Trump’s guests at the second presidential debate Sunday, after his campaign was thrown on defense by the release of a tape in which he bragged about his own ability to do “whatever you want” to women.

Now they appear to be part of an ongoing effort by the Trump campaign to paint the Clintons enemies of women.

On Tuesday, the four women sat down with Fox News host Sean Hannity—who has long praised Trump and appeared in an ad for the candidate—in order to elaborate on their decades-old allegations against the Clintons.

The first segment of Hannity’s show featured Kathy Shelton, who was brutally raped at age 12 by a man whom Hillary Clinton later defended. Hannity made several factual inaccuracies in describing Clinton’s involvement: he said she was a public defender (she was actually a law instructor who ran a legal aid clinic) and he said she took the case as a favor to a friend (she was actually appointed by a judge, and only reluctantly agreed to take the case after her request to be removed was denied).

But Shelton’s story is devastating. At 12, she was brutally raped by 41-year old Thomas Alfred Taylor, injured so badly that she was in a coma for five days and robbed of the ability to have children. Hillary Clinton represented Taylor, encouraging him to plead guilty to a lesser charge so that he would spend only a year in prison, instead of the 15 the crime would ordinarily carry. Clinton also filed an affidavit requesting an evaluation of Shelton on the grounds that she could be “emotionally unstable” and “children in early adolescence tend to exaggerate or romanticize.”

Candice Jackson, Kathy Shelton’s attorney, told Hannity that the affidavit amounts to victim-blaming. “All of the things that Hillary Clinton put in that affidavit were intended to portrayer her as a liar, someone who made up this rape, that if there was sex it was consensual as a 12-year-old virgin,” she said.

“Just about every speech she gives, she says ‘I care about women and children,’” said Shelton. “If she cared about children, she wouldn’t have put me through what she put me through.”

Next, Hannity sat down with Juanita Broaddrick, Paula Jones, and Kathleen Willey, who have all alleged that Clinton sexually assaulted them at different points in his political career, and that Hillary Clinton tried to intimidate them into silence. Broaddrick says that Bill Clinton raped her in a Little Rock hotel room in 1978, when he was Attorney General of Arkansas, Jones says Clinton groped her while he was Governor of Arkansas and Willey says Clinton harassed her in the Oval Office while he was President. Only Jones’s case resulted in any kind of settlement (an $850,000 settlement with no admission of wrongdoing.) You can read more about all the allegations here.

All three women said they thought it was important to share their stories with a younger generation who may not have been around when the allegations originally surfaced in the 1990s.

“I think it’s really important for the millennials to know, those that weren’t born when I came forward after Bill Clinton raped me, and those that were too young to understand what we went through,” said Broaddrick. “I thought also, we might possibly be able to bring this out and influence people, and be able to tell them that Hillary not for all women, Hillary is only for one woman, and that’s herself.”

Broaddrick says that shortly after the alleged rape, she was approached by Hillary Clinton at a fundraiser and pressured to stay silent about what had happened. “She pulls me into her… and that very sweet voice fades to a very angry voice, a very low voice, and she pulls me close to her, and she says ‘Do you understand everything you do?’ Broaddrick said. “I felt like in that moment she knew everything and was saying ‘You better keep quiet.’”

All three women also blasted the mainstream media for ignoring their stories, but TIME had reached out to Broaddrick and Willey but they chose not to be interviewed.

“Everybody in the mainstream press is calling all of Bill Clinton’s crimes ‘infidelities,’” added Willey. “Rape, sexual harassment and sexual assault are not ‘infidelities.’”

All three women said they feared what would happen if Hillary Clinton became President. “There’s been so many things that happened to so many people that are connected to the Clintons,” Jones said. “She’s gonna rule the world.”