To Clinton, These Swing States Are Starting to Look More Like Safe States 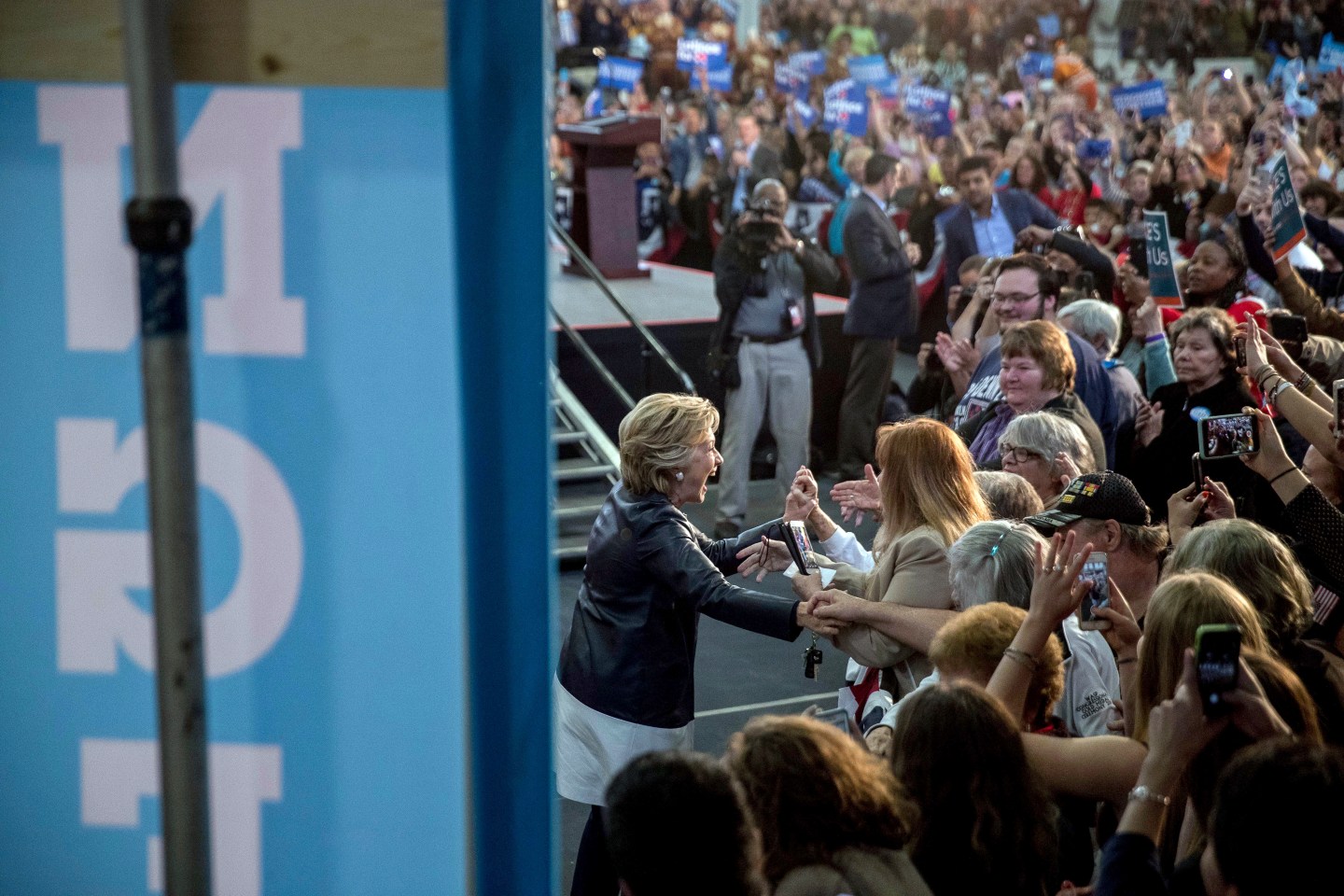 Just under a month from Election Day, Hillary Clinton is treating a trio of perennial swing states—Colorado, Virginia and Wisconsin—more like safe states.

The Democratic nominee isn’t running television advertisements in any of the three states and has barely campaigned in them —her trip to Pueblo, Colorado, on Wednesday was her first in that state since August. Even when the occasional public poll pops up suggesting a narrowing of the contest, particularly in Colorado and Wisconsin she doesn’t budge.

Democrats’ confidence is driven by a changing population, Trump’s stunning unpopularity with women and his struggle to make inroads with other crucial voting blocs, like Hispanics. It’s freed Clinton to spend more time and money in places like North Carolina, Pennsylvania and Florida, three states that are a must-win for Trump.

“The goal isn’t to spread yourself thin or everywhere,” said Joel Benenson, Clinton’s pollster and chief strategist. “The goal is to concentrate your resources in a way that gives you the most and the best path to 270 or more electoral votes.”

Clinton’s campaign still has a significant presence in the three states: 27 offices in Colorado, 34 in Virginia and 41 in Wisconsin. Running mate Tim Kaine has been making stops in some of the states, along with prominent supporters such as her husband and Vermont Sen. Bernie Sanders.

Clinton’s minimal presence in Colorado is striking compared with the significant time and attention President Barack Obama devoted to the state during his two elections. Obama was rewarded with wins both times, with his 2008 victory marking just the second time in 40 years that Colorado voted for the Democrat in a presidential election.

Democrats see Obama’s victories as the start of a political shift that’s made the Western battleground welcome territory for Democrats. The electorate is increasingly educated, affluent and heavily tilted to suburban women. About 20 percent of Colorado residents are Hispanic.

Voter registration numbers also tell a favorable story for Clinton. For the first time in more than 30 years, more Democrats are registered to vote in Colorado than Republicans.

“The gold star for voter registration goes to Democrats,” said David Flaherty, a Colorado-based Republican pollster. Looking toward future presidential elections, he said that while Colorado “isn’t totally out of reach yet” for Republicans, population shifts are pushing in that direction.

Trump’s best chance of overtaking Clinton in Colorado is if young people flock to Libertarian Gary Johnson, who has looked strong in the state but appears to be fading slightly in national polls.

Trump, who only recently started making multimillion dollar advertising buys, has spent about $2.5 million on spots in Colorado since early September, according to data from Kantar Media’s advertising tracker. His campaign has an additional $2 million reserved there through Election Day, a paltry amount compared with what campaigns typically spend on advertising in battleground states.

Clinton’s campaign believes Virginia is swiftly moving from a swing state to reliably Democratic territory in presidential elections. It’s a striking assessment given that Virginia hadn’t voted for a Democrat in more than 40 years before Obama’s first of two victories.

Like Colorado, Clinton’s comfort in Virginia comes from both a changing population makeup and Trump’s struggles with suburban woman. The state continues to get less white, and its suburban areas, particularly in northern Virginia, keep adding more moderate and well-educated voters.

Still, Virginia has been a regular stop for Trump. He’s visited six times since the summer Republican convention and is spending about the same amount of money on television ads there as he is in Colorado.

If Trump loses Virginia, he’ll need to find another way to make up a batch of electoral votes that successful Republicans have banked on. An upset in Wisconsin would get him most of the way there, but….

Wisconsin has voted for the Democrat in every presidential election since 1984. But with a largely white electorate, it’s a state where Republican presidential candidates often make an aggressive play and where Democrats spend money to hold them off.

Of all the swing states, Wisconsin was initially viewed by Trump’s team as potentially favorable. At first glance, the state’s population would seem favorable for a candidate whose core support comes from white, working class voters. But Trump’s brash brand of politics turned off Wisconsin conservatives in the primary and he was defeated handily.

Paul Maslin, a Wisconsin-based Democratic pollster, said Trump hasn’t been able to make up ground with those voters

“This notion that in Wisconsin he was going to have this magical white working class appeal and that was going to flip the state, that just hasn’t happened,” Maslin said.

Clinton isn’t spending money on ads in Wisconsin and hasn’t made a single campaign stop there since winning the Democratic nomination. Trump recently reserved about $600,000 in airtime in Wisconsin over the next few weeks.

Trump had hoped for a splashy show of party unity in Wisconsin last weekend, when he was scheduled to appear alongside Gov. Scott Walker and House Speaker Paul Ryan at a party event in their home state. But Ryan revoked the invitation to Trump after the release of a tape in which the businessman is heard making predatory sexual comments about women.