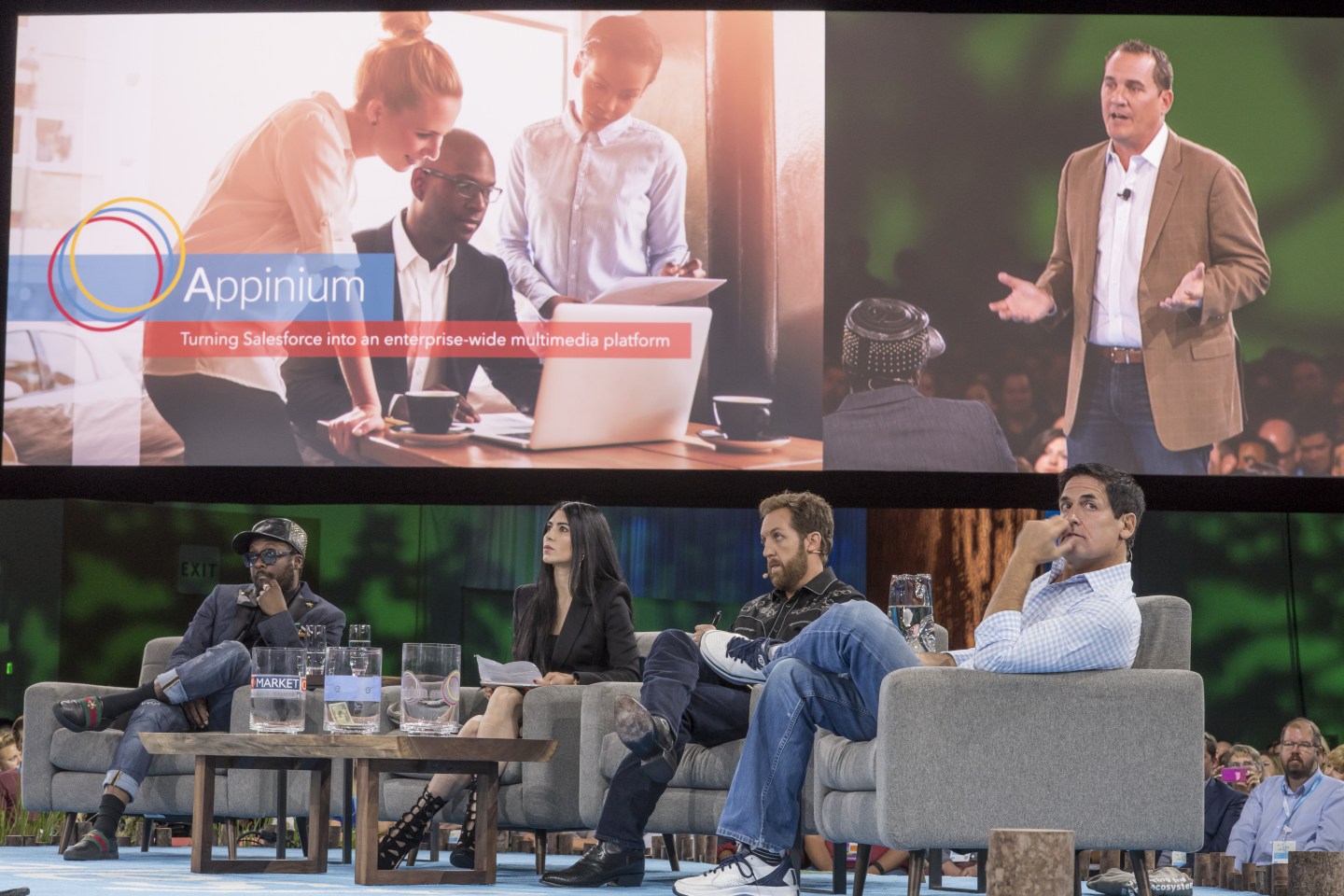 What do you get when you combine two sharks, one music star, the CEO of a digital media company, and a few startups? You get the first startup pitch competition at Dreamforce, the annual enterprise software conference hosted in San Francisco by Salesforce.

On Tuesday, three startups took the stage to present their nascent businesses in front of a crowd of enthusiastic cloud software customers—not to mention a star-studded panel of judges made up of investors Mark Cuban and Chris Sacca, BroadbandTV CEO Shahrzad Rafati, and music artist Will.i.am.

At stake was the chance to participate in Salesforce’s startup accelerator program and a thousands of dollars in free services, but the prize wasn’t easily won. If anything, the judges’ questioning of the startups and their sharp teasing of each other took center stage.

“You can’t say that your unfair advantage is that you’re breathing,” said Sacca, an early investor in Twitter (TWTR) and Uber, in reply to CRM Market CEO Tal Frankfurt’s unconvincing argument about his startup’s qualifications to succeed. When asked why his company is better than competitors, Frankfurt told the judges that he had been working with Salesforce’s software for years and has attended the company’s conference 11 times.

Frankfurt’s startup is a marketplace connecting information technology consultants with expertise in Salesforce’s business software with businesses who need help. The entrepreneur compared his business to an “Angie’s List for the Salesforce ecosystem,” though the catchy riff on the well-known home services marketplace ultimately did little to shield him from the judges’ tough questions.

After a buzzer put an end to the assault, Frankfurt wiped off his forehead as he took a seat in the audience.

Another startup, Appinium, which lets companies that use Salesforce’s software host videos and collect data about them, tried to impress the judges by touting customers like American Express (AXP) and it’s plan for philanthropy modeled after Salesforce’s.

But it was the short clip from an episode of ABC’s Shark Tank television series, depicting Cuban and Sacca arguing about a startup’s business potential, that drew the biggest cheer from the audience during Appinium’s presentation.

Meanwhile, it was Claire, the only startup with a female co-founder to present, that seemed to impress the judges the most. The young company has built a chat bot—a automated software program that interacts with messaging app users—that lets companies gather feedback about a new or upcoming product from consumers via Facebook’s Messenger app. Over the past couple of years, Facebook (FB) has made its messaging app increasingly more available for businesses who want to interact with their customers there. Earlier this year, it opened up access to such chat bots from third-party developers.

“With the Claire folks, I think there was something actually innovative,” said Sacca, who was used as a model during the founders’ demo of their service using an hypothetical Western shirt company. (Sacca, for those not familiar with the investor’s signature wardrobe, is known for donning embroidered Western shirts in public appearances.)

Of course, Cuban couldn’t miss an opportunity to tease his fellow judge.

“Maybe someday you’ll reach a point in your life where you’re able to wear any clothing you want and not some silly shirt,” he told Sacca as they delivered their final thoughts before crowning the winning startup.

Although the judges doled out some of the prizes to all three companies, Claire ultimately won the top spot after impressing even judge Will.i.am with its strategy to weed out so-called “trolls” and “haters” from the users interacting with its software.

And while no one called attention to it on-stage, it was also a small victory women in the tech industry, a cause Salesforce (CRM) only recently made a priority. Just last month, the software giant appointed its first chief equality officer, Tony Prophet, to lead the company’s efforts in treating all employees fairly and equally.