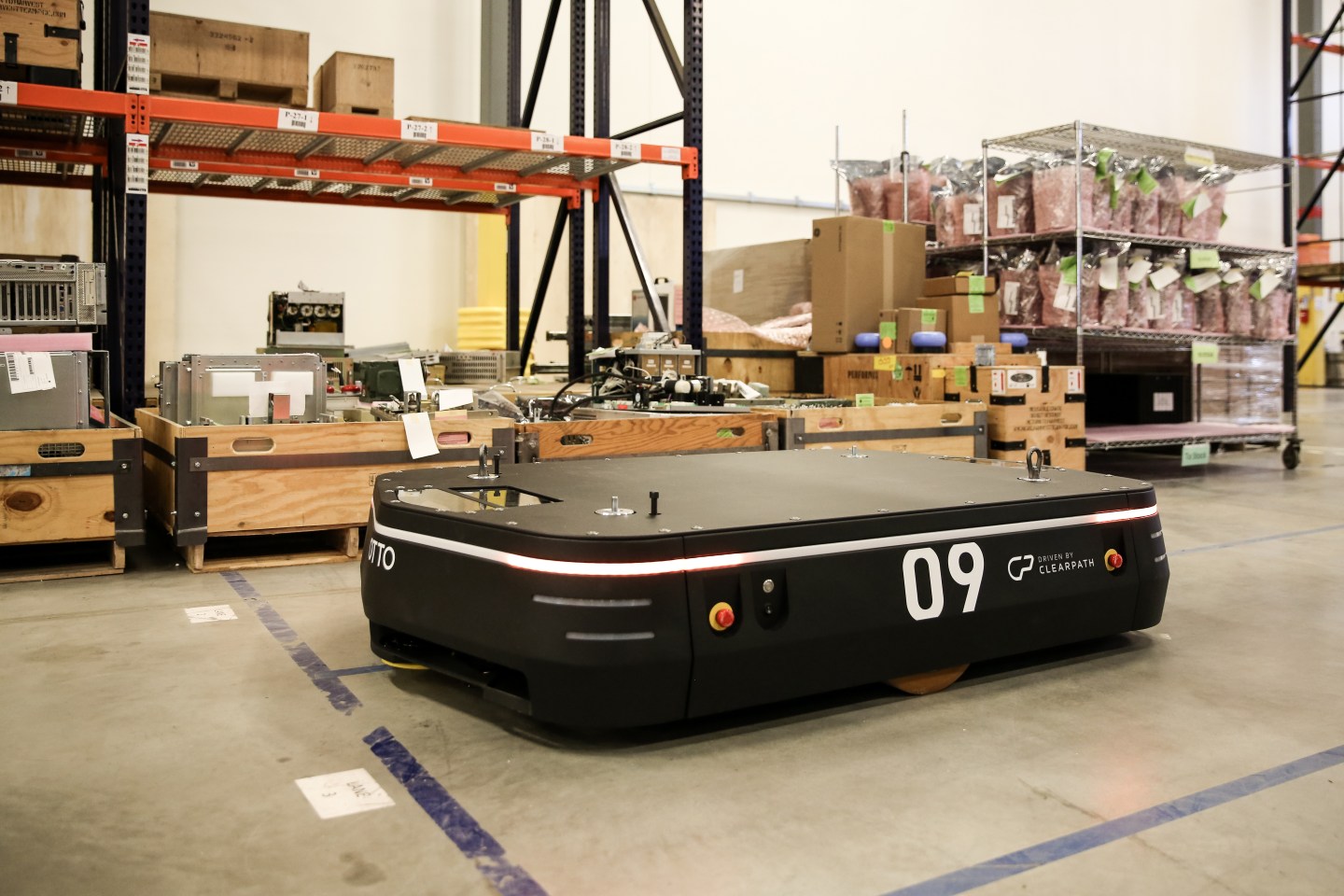 Self-driving vehicles that can seamlessly shuttle people around cities are years away—perhaps even decades, depending on who is providing the forecast. But the founders of Clearpath Robotics aren’t worried. They already have fleets of self-driving vehicles operating on roads with traffic, intersections, and pedestrians.

But instead of shuttling people through city streets, the startup’s self-driving vehicles navigate goods through the miles of roads inside massive industrial factories, including at Caterpillar (CAT) and GE (GE).

“Unlike city streets, a factory floor is a controlled environment, which makes it an ideal place to introduce self-driving vehicles at scale,” said Clearpath CEO and co-founder Matt Rendall. “Companies like Google, Tesla, and Uber are still testing, whereas our self-driving vehicles are commercially available today.”

And it’s catching the attention of investors and industrial companies.

Clearpath Robotics, a Canadian startup, announced Wednesday it has raised $30 million in a funding round led by iNovia Capital, with participation from Caterpillar Ventures, GE Ventures, Eclipse Ventures, RRE Ventures, and Silicon Valley Bank. The funding will be used to grow the company’s industrial division, OTTO Motors—not to be mistaken with the startup, Otto, which was acquired by Uber in August.

The funds will be used to expand the company, namely hiring people in marketing, sales, and manufacturing. The company employs more than 155 people and could reach about 250 a year from now.

Clearpath Robotics spun out of the University of Waterloo in Ontario, Canada in 2008. In its early days, Clearpath was focused on developing autonomous vehicles, but the industry didn’t yet exist, Rendall told Fortune. “We felt it was going to [be] big, but we were a little bit ahead of our time.”

Clearpath’s founders participated in a U.S. Department of Defense-funded robotics competition to design a robot that could detect and remove land mines. After receiving a $300,000 angel investment, the company pivoted to research and development—working with labs at major companies, academic institutes, and government agencies such as the Department of Defense and NASA.

But Amazon’s 2012 acquisition of Kiva Systems—a company that made automated storage and retrieval systems—opened up a new opportunity for Clearpath. Kiva Systems had dominated the manufacturing and logistics world providing automated systems for large retailers like Staples. After the acquisition, Amazon didn’t renew contracts with retailers, and instead incorporated the systems into its own fulfillment centers.

Nobody came to backfill the hole that Amazon created when it bought Kiva Systems, Rendall said. Clearpath saw an uptick in demand on the research and development side for advanced materials’ handling capabilities, mobile robots, and other unmanned vehicles.

The company shifted its focus, and in 2015, raised $11.2 million in a Series A round. It launched an industrial division called OTTO Motors to develop self-driving vehicles to automate the movement of inventory in factories.

“If you focus on indoor industrial self-driving vehicles versus outdoor consumer self-driving vehicles, it’s a path where we have much greater control of our own destiny,” Rendall said. “You’re not holding your breath waiting for the regulatory and insurance questions to be answered, plus all of the testing and safety and the amount of capital required.”

Caterpillar and GE are already customers of OTTO Motors. John Deere has deployed OTTO’s material handling equipment in its facilities. In all, OTTO Motors is working with about a dozen large logistics and manufacturing companies.