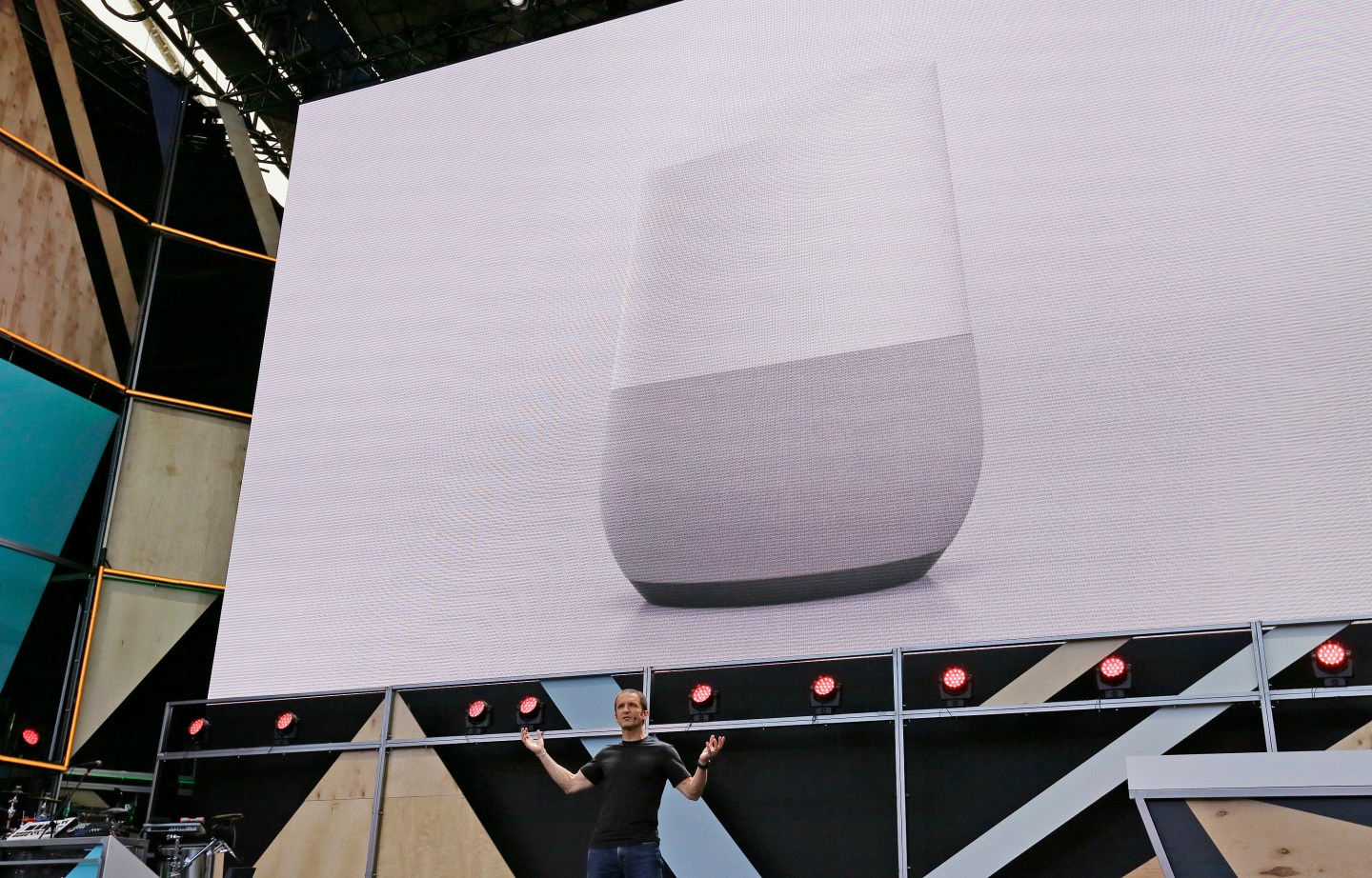 Google has introduced a voice-controlled home automation hub, intensifying a battle among tech giants over devices that respond to your questions, play music, and tell you the weather.

Google Home, which costs $129, was announced at a San Francisco event on Tuesday.Amazon, in particular, has a big head start with its Echo device, which has gained strong momentum since its introduction last year. However, Amazon’s Echo costs $50 more, at $180.

Google Home, which is circular in shape, is small enough to fit in your hand. Like Amazon Echo, it is designed to sit in your kitchen and home.

Also similar to Echo, people can use their voices with Google Home to search for information using simple language after alerting the device to the listen with the phrase,”Okay Google.” The device is powered by Google’s new voice recognition technology, Google Assistant, which responds back with answers. The device shows that it recognizes a voice command by lighting up red, blue, green and yellow lights on the top of the device.

Unlike Amazon, Google Home taps into the power of Google’s own wealth of search information. You can ask Home to translate different languages, get nutritional information, and provide the latest traffic and news.

Because Home connects to Gmail and Google Calendar accounts, you can also get daily information from these services. If you say, “Tell me about my day,” you’ll get a briefing of the weather in your location, your commute, events in your calendar and, a news briefing from a source of your choice.

Like Echo, you can play music from a number of music services, including YouTube, Google’s music service Play, Spotify, and TuneIn (though notably, there is no support for Amazon Music).

Beyond Google queries and playing music, Google Home will also turn off and on lights and control home thermostats through integrations with Nest and SmartThings.

Lastly, you can use Home to also control Google’s TV and movie streaming service, Chromecast, by voice. For example, you can tell Home to play a specific movie.

One thing that was missing from Home that is in Amazon’s favor is a tight integration with e-commerce. Echo users, for instance, can use the device to order and restock items like toilet paper and paper towels.

For more about Amazon Echo, watch:

The big question will be whether Home can eat into Amazon’s year-long head start with Echo. Key to Google’s success will be making sure that Home can provide features that Amazon can’t because it doesn’t have access to personal information like emails or calendars.

The intelligence of Google’s voice assistant will also be a crucial factor in determining who wins the home hub wars. Amazon has been doubling down on its own assistant Alexa. Earlier this year, Amazon CEO Jeff Bezos said that more than 1,000 people were working on Alexa’s technology and that he believes Alexa will become the fourth pillar of Amazon’s business. The others are Amazon Prime, its online retail marketplace, and cloud computing business Amazon Web Services.