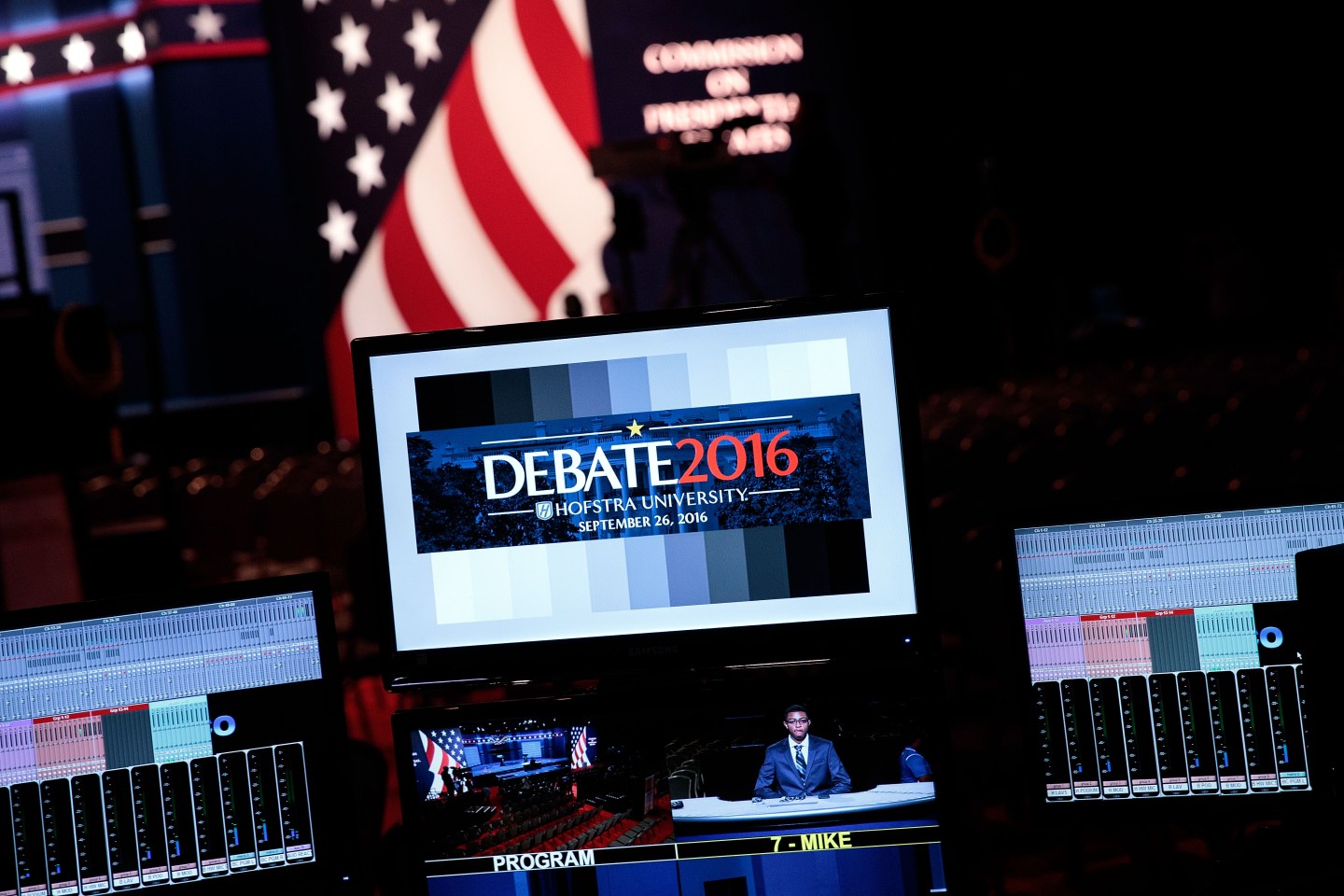 After more than a year of wall-to-wall campaigning, the outcome of the 2016 election could hinge on 90 unpredictable minutes Monday night in Hempstead, N.Y.

The first presidential debate between Hillary Clinton and Donald Trump is expected to be the most watched in history, with perhaps 100 million viewers tuning in for a showdown with the power to upend an increasingly close race. Given the reach of social media, every mistake or charged moment at Hofstra University will be amplified for the remaining five weeks before Election Day.

The clash comes at a crucial moment for Clinton. The Democrat’s summer lead has dwindled in recent weeks amid fresh scrutiny of her private email server, a bout with pneumonia and more disciplined performances by her opponent. Polling averages now show Clinton with a narrow national advantage. Surveys of crucial battleground states—including Ohio, Florida, Nevada and North Carolina—are within the margin of error, while Trump has pulled ahead in Iowa and shaved Clinton’s cushion in Virginia, Michigan and Wisconsin.

Clinton still boasts far more paths to the required 270 electoral votes. She enjoys an advantage in on-the-ground organizing in battleground states and a virtual monopoly over the airwaves. But her campaign’s failure to put Trump away has Democrats fretting. Trump is a canny media manipulator, and Monday night on Long Island offers him the best forum this fall to channel his celebrity into political credibility by projecting a presidential bearing, just as early voting gets underway.

Despite radically different approaches, both candidates have proven to be formidable opponents. A veteran debater, Clinton is known for preparation, precision and a firm grasp of policy. She often got the better of Barack Obama during their 2008 primaries, and muscle memory helped get her back into fighting condition during her many clashes against Vermont Sen. Bernie Sanders this year.

Trump, on the other hand, is the ultimate wildcard. His performances during the Republican debates this year were effectively erratic, peppered with personal insults, flamboyant boasts and often flat-out falsehoods. Once, he was even a no-show. It’s an approach his GOP opponents often found hard to counter, and part of the challenge was the mystery of which Trump would show up. Sometimes he slung mud; sometimes he tried to float above the fray. His stumbles did little to dissuade his fervent supporters.

It would be hard to conjure a contest between two more dissimilar candidates. Clinton is most comfortable with nitty-gritty policy; Trump used his time onstage during a debate in Detroit to talk about the size of his penis. Clinton’s instinct is to turn questions into explanations of why her policies would help voters, while Trump prefers to brag in the first person.

The stylistic contrasts extend to their preparation. Clinton has solicited voluminous advice from her sprawling network of advisers and allies. She asks aides to print for her the best answers and insert them into a series of subject-specific binders, which are often spread across the kitchen counter that doubles as her desk these days, or an actual desk that one aide joked grows in size to accommodate the accumulating memos. Trump will entertain suggestions from his insular circle of advisers aboard his personal jet as he soars to campaign rallies. Clinton wants specifics and details; Trump wants one-liners that will be catnip for cable television.

The 90-minute contest, moderated by NBC News’ Lester Holt, will feature six 15-minute segments on subjects such as “America’s Direction,” “Achieving Prosperity” and “Securing America.” The vague parameters offer the candidates ample opportunity to steer the conversation toward preferred terrain, whether it’s Clinton’s emphasis on lifting women and children or Trump’s promise to build a border wall.

One challenge for Clinton is higher expectations. Some advisers are telegraphing that she will, as ever, be the overly prepared technocrat who can tick through detailed specifics on everything from tax policy to Tel Aviv airport access for American airliners. Others caution that Clinton is a by-the-book candidate who thinks everyone on the debate stage—rival and moderator alike—should heed the pre-arranged rules. Deviation there could put her off her game, and complaining about it later carries risks: aides don’t want the first female nominee of a major party to get branded as a whiner. It’s one thing to interrupt a foreign minister on policy disagreements in private, and another to cut off a political rival in public even if he veers outside the parameters of established fact or social norms.

Then there is the Republican. Clinton’s team and Trump’s boosters are equally unsure which version of the billionaire will show up: the braggart or the businessman? Clinton is preparing for both, although her top advisers worry the split-track preparations have left each option under-explored. The leading advice is to have Clinton behave the same way regardless, with just one or two prepackaged retorts at the ready for each of Trump’s possible provocations. “She has to be herself,” one adviser who is not in the room with Clinton says. “She already has the honest-and-trustworthy problem without showing up as someone she isn’t. She’s a nerd. She has to own that.”

Even Trump’s supporters are nervous about his scattershot preparations. Debates are among the most important moments of the fall campaign. Trump was able to skate through his primary debates by wielding snark and snide asides as a weapon on crowded stages. One-on-one contests are different. Eschewing the customary mock debates to prepare, Trump is more comfortable chewing over ideas with aides on his plane and at his houses. Instead of veteran Republican debate hands, his pre-debate powwows are filled with former Breitbart executives, family members and elected officials with whom the candidate is close.

Presidential debates have a baked-in power that no other moments in the campaign can match. A strong performance before a vast audience—including many voters tuning in to watch the candidates for the first time—can turn the tide of the race. In 2012, Republican nominee Mitt Romney clawed back into the contest with a forceful showing in the first debate against Obama, boosting his poll numbers and infusing his flagging campaign with fresh momentum and money.

But Americans’ minds are largely made up this year. Voters seem to be watching two totally disconnected, unrelated campaigns play out in partisan media and self-selected social media accounts. That’s why many observers believe Monday night’s television—the Super Bowl of campaign 2016—will be an emotional event and not an intellectual one. In a contest featuring the two least-beloved major party nominees in modern times, each candidate will have to nurture a connection with the audience that will endure through Election Day.