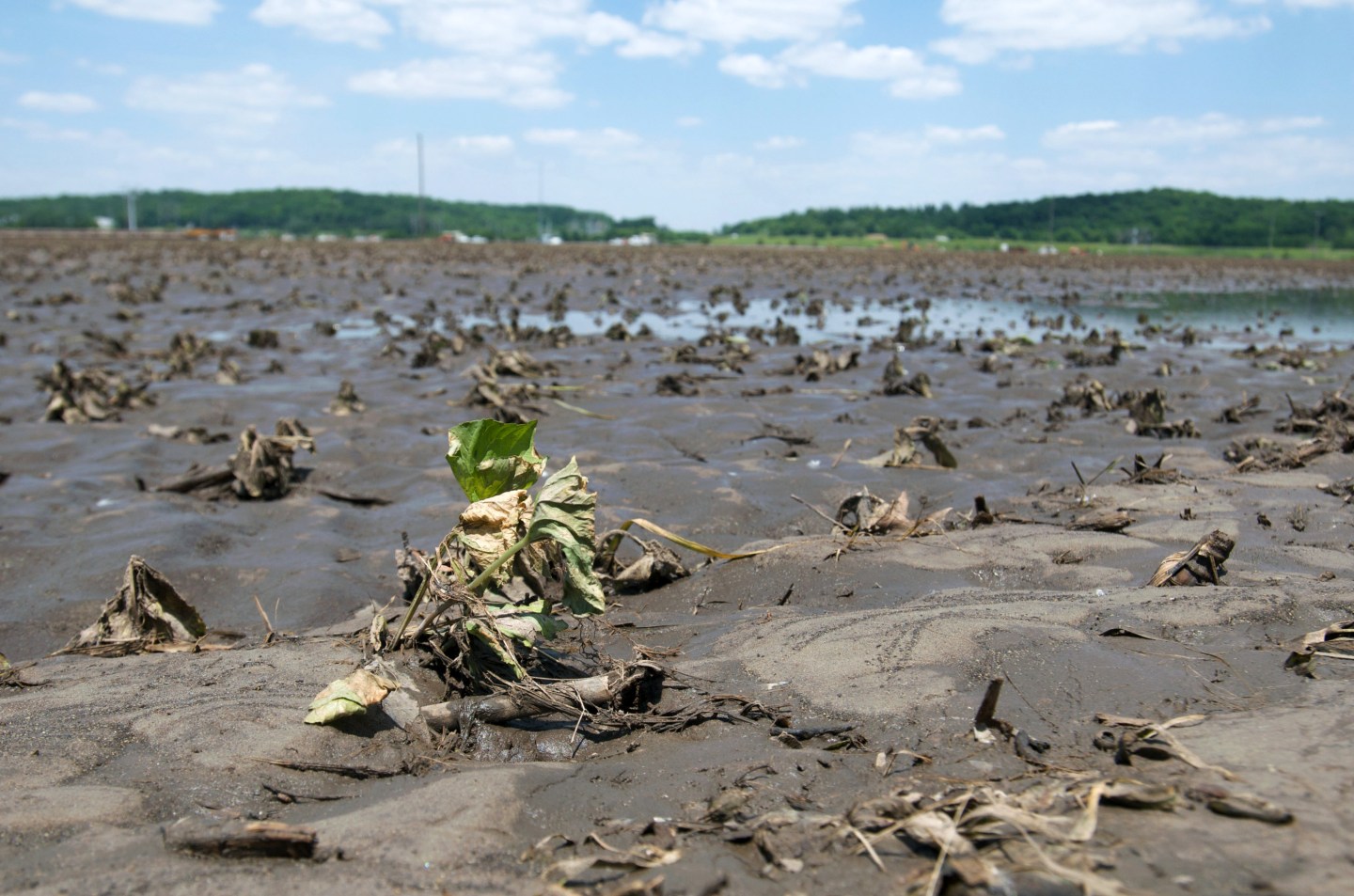 CEDAR RAPIDS, IA - JUNE 18: Flood damaged soybeans are seen on a farm on June 18, 2008 in Cedar Rapids, Iowa. Record flooding in the midwest may push food prices up as much of the farmland will not be able to be farmed this year. (Photo by David Greedy/Getty Images)
David Greedy Getty Images

Heavy rains and flooding swamped a broad swathe of the northern Midwest this week, halting the harvest of corn and soybeans and forcing the closure of at least two Iowa crop processing plants, traders and farmers said on Friday.

Farmers’ concerns grew that standing water in fields could damage unharvested crops, while floodwaters swelled the Mississippi River and threatened to disrupt the loading of export-bound grain barges.

The region is expected to see two days of drier weather before more showers through next week, said David Streit, agricultural meteorologist with the Commodity Weather Group.

Cargill stopped taking deliveries of corn and soybeans at its processing plants in CedarRapids, Iowa, due to flooding in the area, with the nearby Cedar River forecast to reach major flood stage over the weekend.

The soy plant is scheduled to be closed through next Wednesday, but it was still buying soybeans and would reassess the closure on Monday, an Iowa grain merchant said.

Farmers, meanwhile, are waiting for fields to drain and dry out before resuming the harvest, a process that will take longer in cooler September weather than it would in midsummer heat.

Soggy conditions and waterlogged fields have raised concerns about crop damage and disease, which could reduce farmer revenues at a time when grain prices are already near multi-year lows.

“If (soybeans) are under water for more than a day or two, it will be bad,” said University of Minnesota extension agronomist Seth Naeve.

“Those flooded areas probably will get harvested, but farmers will have to harvest them separately, and have them accepted at elevator at a lower price or at a salvage rate.”

Just 2% of Minnesota’s soybeans and 2% of Iowa’s corn was harvested as of last Sunday, according to the U.S. Department of Agriculture.

The U.S. Army Corps of Engineers said it is currently not planning to close any of the Mississippi’s locks as the latest National Weather Service forecast shows water rising near, but not above, the lock-closure stage.