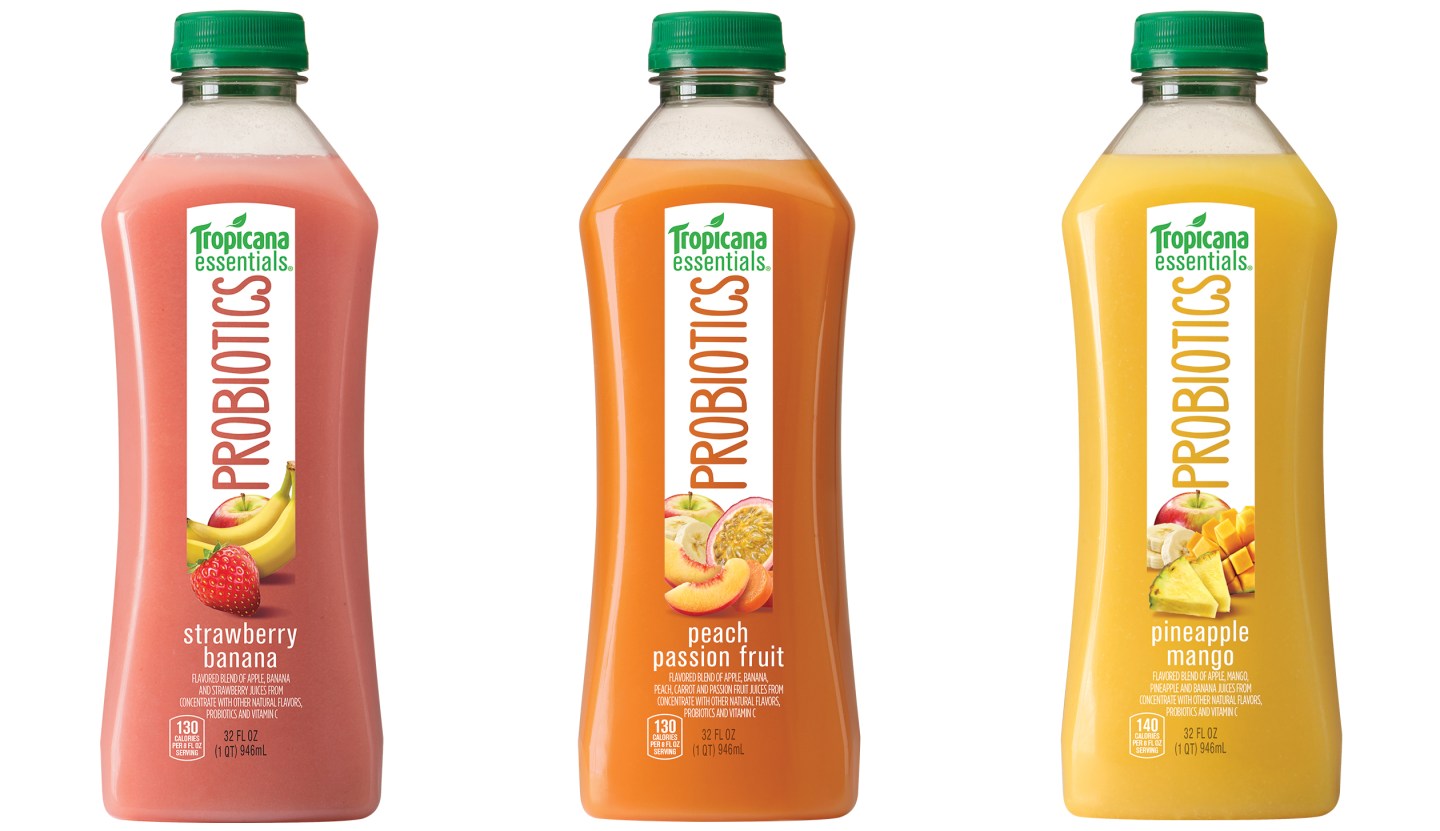 PepsiCo has got a new twist planned for Tropicana juice: live microorganisms.

The Big Food conglomerate is launching the Tropicana Essentials Probiotics, a move to expand the brand into a subcategory of the juice aisle that has seen rapid growth—so-called “functional juices.” Those beverages are selling strongly as consumers look for more nutritional benefits in the foods and drinks they consume. Tropicana Essentials Probiotics will launch nationally in 2017, with some limited early distribution planned for next month.

“We see ‘functional’ juices growing at twice the rate of mainstream juices,” said Bjorn Bernemann, general manager for the Tropicana brand in North America, in an interview with Fortune. “They want to add more probiotics to their daily routine.” Often, probiotics are found in supplements, kombucha, and yogurts—all categories that are performing strongly in U.S. grocery stores today. Probiotics are live microorganisms that have purported health benefits, especially as it relates to immunity and digestive health, though not all aspects of probiotics are fully understood by experts.

Still, Tropicana is hopeful for a hit with this new innovation, which took several years to develop internally. It is also the first probiotics offering in the mainstream juice aisle, PepsiCo (PEP) has claimed. And encouragingly, observers say juice is actually a good natural fit for probiotics, at least when it comes to a taste perspective.

Orange juice is a beverage category that has fallen out of favor with consumers, a decline that in some ways mirrors the troubles that the soda industry is facing. PepsiCo is highly active in both beverage segments, with market-leading positions with the namesake Pepsi and Mountain Dew brands. Tropicana, meanwhile, is the market leader for juice—with 7.4% of the market according to research firm Euromonitor. While it outsells Coca-Cola’s (KO) Minute Maid and Kraft Foods’ (KRFT) Capri-Sun, all three are losing market share in recent years as upstart brands perform more strongly.

The challenge for PepsiCo: giving consumers a reason to want to buy juice again, ideally by entering into adjacent categories where demand is stronger. Tropicana Essentials Probiotics is part of a bigger push at PepsiCo to use innovation to fuel growth. In the second quarter, new products comprised about $5 billion, or 9%, of the company’s sales. Executives will likely tout innovation in the company’s third-quarter presentation next week.

Bernemann says what Tropicana must confront is the perception that orange juice has too much sugar—in particular, the misconception that there’s added sugar. He points out that the brand’s mainstay product, Tropicana Pure Premium, is 100% orange juice without any added sugar, preservatives, or artificial flavors. Tropicana Essentials Probiotics also makes that promise.

“There is a great deal of confusion and misinformation around orange juice, which is incredibly nutritious,” says Bernemann.

Observers agree that concerns about sugar content are part of the segment’s perception problems. Research firm NPD Group said that 10 years ago, fruit juice was a stable of 19% of all breakfasts consumed by Americans. Today, it is down to 15%—resulting in billions of meals that don’t include orange or other juices.

“All around, whether it’s your main meal or a snack occasion, we’re seeing consumers gravitate toward foods that are lower in sugar,” says Darren Seifer, food and beverage industry analyst at NPD.

Duane Standford, editor of industry publication Beverage Digest, says that PepsiCo and its rivals in the beverage world are keenly accessing their portfolio and determining what white spaces they can tackle to address fast-moving consumer trends that increasingly tilt toward healthier and cleaner labels and ingredients. “Consumers are looking for certain things on these labels,” Standford says. That means they want fewer ingredients, less preservatives and artificial colors, and organic alternatives.

The trick for companies like PepsiCo, Coke, and other Big Food rivals is that they have to be selective about what trends to pursue. While they have massive global distribution and big marketing budgets, not every trend is sustainable or worth pursuing.

“Some consumers are always going to look for local or regional brands, but look—if consumers are interested in a probiotic orange juice—they’ll be concerned with how it tastes, how much it costs and how accessible it is,” argues Standford.

Bernemann thinks consumers will be convinced. When asked what he personally thought of the final product, Bernemann painted the scene: the Tropicana team tasted the final slate of beverages in Chicago before they went out for a last test trial in the market. “It tasted absolutely delicious,” he recalled. “I just saw people smiling across the room.”

The story has been updated to correct a quote attributed to Bernemann.