A New Kind of Solar Panel That’s Smart, Stores Energy, and Even Talks 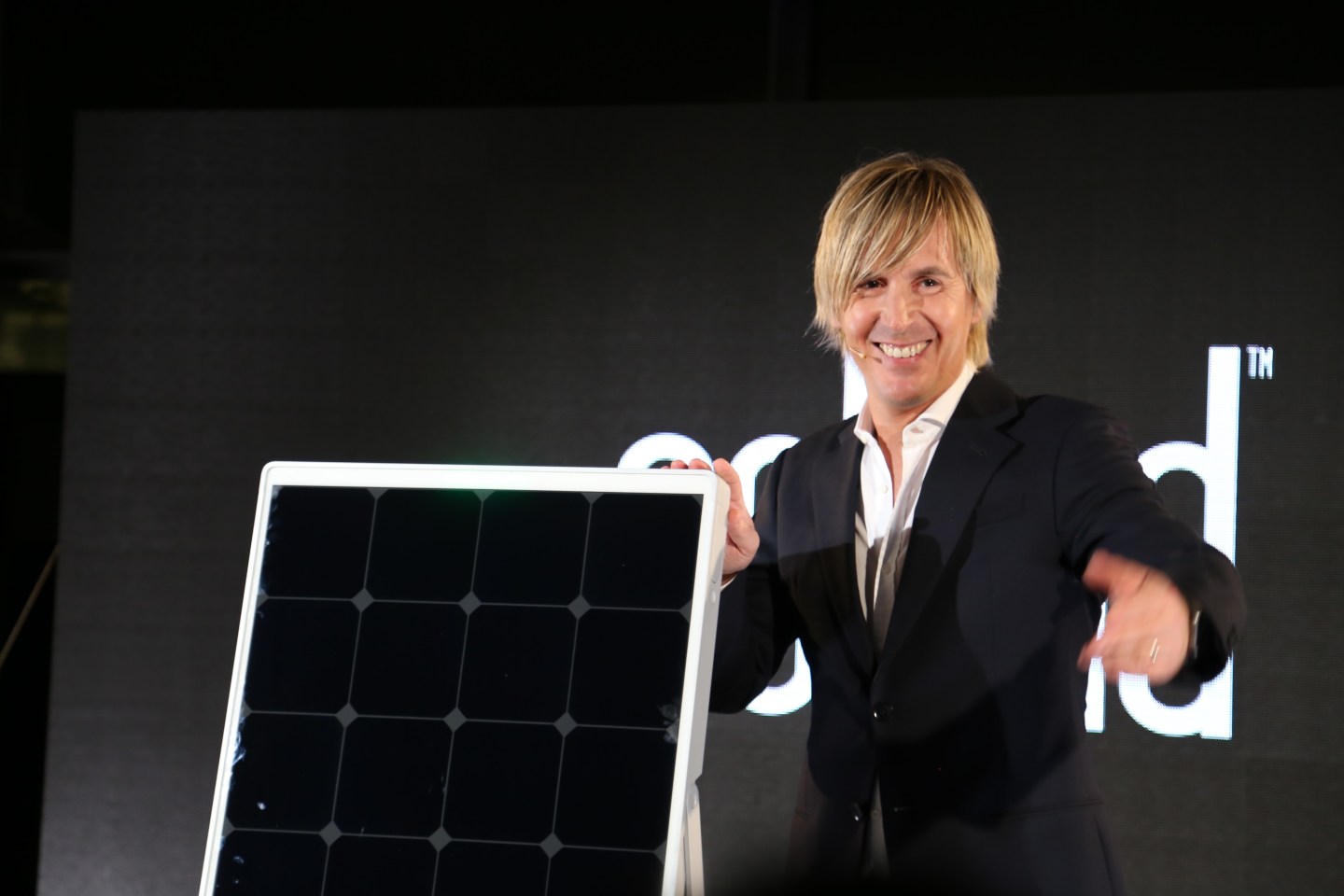 A fog machine goes off, and an astronaut emerges from behind the assembled crowd, carrying the device that the room has been waiting to see up onto the stage.

The atmosphere could be mistaken for the unveiling of the latest virtual reality headset or a new Silicon Valley-backed fitness tracker.

But the four-year-old startup called SunCulture Solar, led by entrepreneur and inventor Christopher Estes, has developed something much more unusual and the company unveiled it for the first time on Wednesday night in the penthouse at The Battery club in downtown San Francisco.

Estes has redesigned the solar panel, integrating batteries into the panel itself, overlaying it with smart sensors and software and wirelessly linking it to a computing hub and cell phone app. The company’s panels, called SolPads, are supposed to be sold late next year in a system for a rooftop, or as a stand alone panel that can be propped up on a back deck or balcony.

Partly by integrating the batteries inside the panels, SunCulture Solar says it can sell a home rooftop solar system for half of the cost of currently available solar panel and battery system combos.

Estes, who created the company with his wife Amy Becker Estes, described his new solar panel in an interview with Fortune earlier this month as “the smartest on the planet.” He hopes that rethinking the panel “will do for the solar industry what smart phones did for the computer industry.”

It’s a tall order. Few solar panel makers are really thinking differently about the aesthetics of panels, or are integrating computing intelligence and user experience design into the panel itself (SolPads can respond to finger taps and can even talk). No solar companies are integrating batteries inside panels.

Instead most are thinking about cost. With the dramatic growth in sales of solar panels over the past few years, solar panels are now at their cheapest time in history. In some large solar farms, built to sell power to utilities, energy from solar panels can fetch prices as low as four cents per kilowatt hour; cheaper than natural gas and coal power.

But as low cost panels get cheaper and cheaper, and as the technology becomes more mainstream, a few companies are trying to differentiate solar panels by making them higher-end, more efficient, and more tied to batteries.

In particular billionaire entrepreneur Elon Musk, and his cousin Lyndon Rive, are now focused on launching new types of solar products at SolarCity (SCTY), as the company undergoes an acquisition by electric car maker Tesla (TSLA). During a recent SolarCity earnings call, Musk said that SolarCity wants his company’s solar panels to be “beautiful,” to eventually all be paired with batteries, and to be so visually compelling as to make homeowners excitedly show them off to their neighbors.

Like Musk, Estes isn’t the typical solar or energy executive. Before SunCulture Solar he developed technology that helps artists and producers make high-quality audio recordings (called Endless Analog) and he’s sold equipment to the likes of Lenny Kravitz and Beck. With his shaggy blonde hair, he looks more like one of his former musician customers than a buttoned up solar VP.

It was musician friends who introduced him to an island in the Caribbean, where he met residents that pay hundreds or even a thousand dollars per month for electricity from the local utility. Island utilities commonly make energy by burning diesel fuel, which has to be shipped in and is both expensive and dirty.

When Estes looked into how residents could buy solar panels instead, he says the options were far too complicated and expensive. So he decided to build his own.

SunCulture Solar is backed by a seed round from private investors, which Estes wouldn’t disclose, but some of which also financed his audio tech company. At the launch event on Wednesday night, a hand full of those investors, many from Nashville, were in the room to support Estes’ second endeavor venture with them.

On a trip to SolPad’s office in Mountain View, Calif., earlier this month, Fortune got a demo of the mobile version of SolPad, the stand-alone panel that can charge on an apartment balcony and plug into an outdoor outlet.

The panel has a variety of novel ways to interact with the user, like a series of colorful LEDs that can twinkle or shine brightly when there’s a power outage or during a programmed “party” mode.

A method of tapping on the surface of the panel can prompt a voice response and information about how the panel is charging and how much battery energy it has left. Estes has written a “personality engine” that encourages the panel to deliver all sorts of sassy voice responses, like chiding you if you knock the panel over.

The company has also created an app, a computing hub and smart plugs that enable a user to run certain home items on solar, and to track a home’s energy use.

Despite all the smart functions, the eventual cost of the stand alone panel might be a sticking point for some. While the company hasn’t disclosed pricing yet, Estes says an individual SolPad Mobile will probably cost between $1,000 and $2,000.

In comparison, the most elaborate and powerful home solar device product from off-grid solar company d.light costs $170. Of course, d.light’s solar panels don’t have all the whiz bang features, and are more meant to help rural customers in sub-Saharan Africa charge cell phones and power radios and TVs.

The SolPad for home rooftops is estimated to cost just under $20,000, which sounds high on first glance, but if you recall also includes the battery storage. The company says traditional solar panels with a robust battery system can cost double that at close to $40,000. Many rooftop solar panels these days are sold through leases, loans, and other types of third-party financing that can enable the customer to pay a monthly solar energy bill that is lower than the one they were paying to their utility.

Another aggressive feature of the SolPads is the company’s use of solid-state batteries as the panel’s storage medium. These types of batteries, produced by companies like Seeo (bought by Bosch) and Sakti3 (bought by Dyson), are meant to be safer, and provide more energy storage per volume, but aren’t widely available yet. SunCulture Solar doesn’t disclose its battery supplier.

As any hardware-focused startup founder will tell you, trying to sell devices (instead of software or services) can be an expensive and difficult endeavor. It can be particularly hard, if, like SunCulture Solar, a company is trying to create an entirely new type of product; a stand alone solar panel that you can interact with (and even talk with) is totally new.