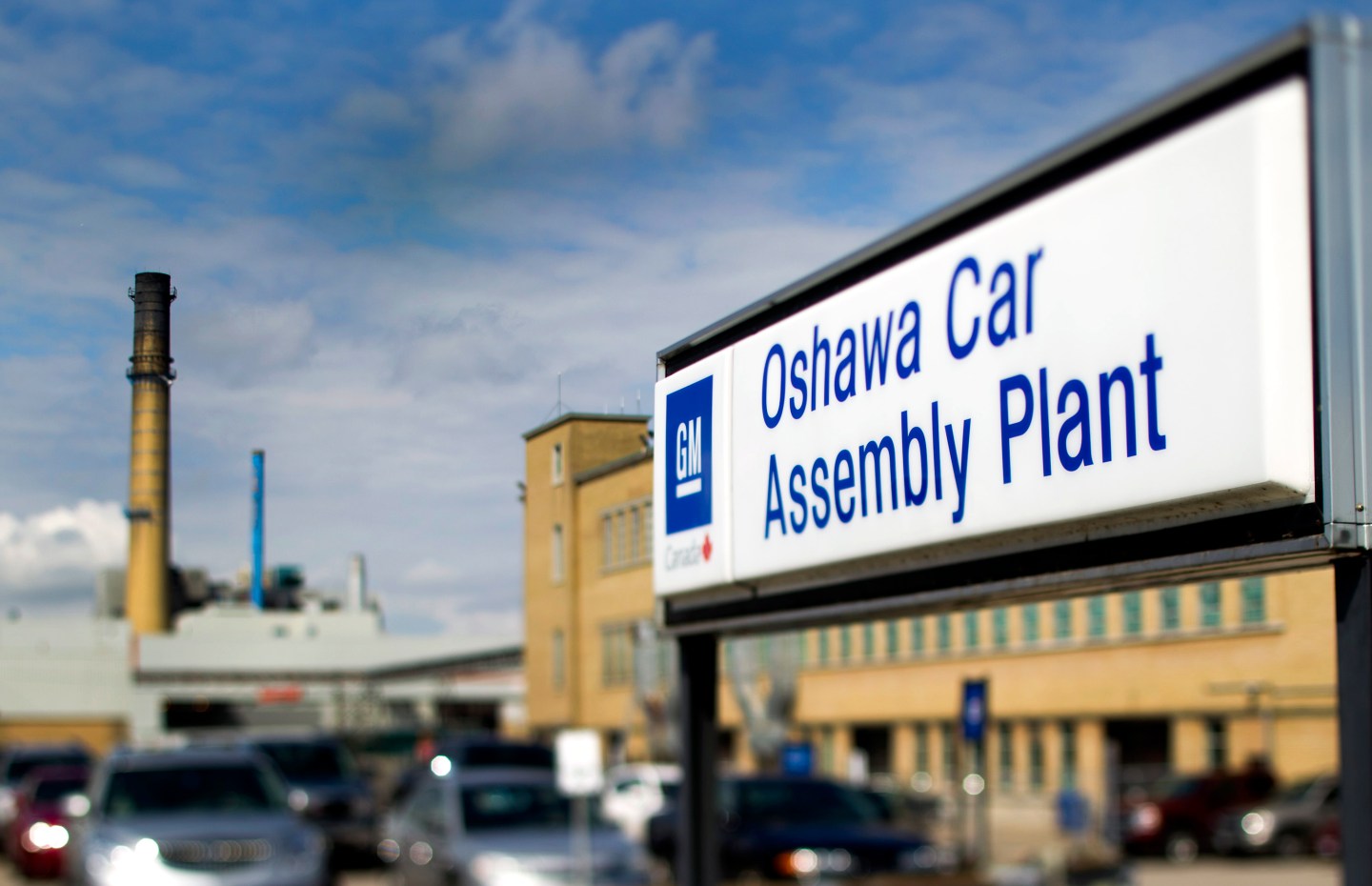 The General Motors Co. (GM) assembly plant stands in this photo taken with a tilt-shift lens in Oshawa, Ontario, Canada, on Monday, Aug. 8, 2011. General Motors of Canada Ltd. will pump $2.535-billion into a trust fund that will finance health-care costs for its retirees, eliminating a key legacy cost that the auto maker said hobbled it in the fiercely competitive North American auto market, according to The Globe and Mail. Photographer: Brent Lewin/Bloomberg via Getty Images
Brent Lewin/Bloomberg via Getty Images

General Motors’ Oshawa plant will do final assembly work on at least 70,000 pickup trucks a year once investments promised in its Canadian unit’s new labor agreement are complete, according to two sources close to negotiations.

GM @general (GM) reached a tentative labor deal with Unifor, the union that represents its Canadian manufacturing workers, early on Tuesday, saving thousands of jobs at the Oshawa plant, but the two sides declined to say what new vehicle would be produced there.

On Wednesday Reuters reported that the plant would do final assembly of Silverado pickup trucks using bodies shipped from the GM plant in Fort Wayne, Indiana, boosting production of the strong-selling model.

But production volume, crucial to staffing levels at the plant, was not immediately clear. On Thursday, the sources said Oshawa would finish at least 70,000 of the trucks a year once necessary investments were made, and perhaps as many as 80,000.

The volume is material to Oshawa. The plant is on track to produce about 210,000 vehicles this year, according to Joe McCabe, president of AutoForecast Solutions. Without new investment, production would have fallen to 130,000 vehicles next year.

Brian Johnson, auto industry analyst for Barclays, said that if GM makes the reported investments in Oshawa it would allow the company to gain share in the lucrative North American pickup truck market. But the company would have to be careful that it does not risk a price war that could threaten profits, he said.

“Right now, the good news is there is price skirmishing (among) pickup trucks (competitors), but no one has enough capacity to do anything stupid,” he said.

Wall Street analysts, citing GM documents filed with U.S. regulators, say that GM could reap an average profit of about $13,000 per vehicle on large trucks similar to those to be made at Oshawa. That would suggest a potential increased profit of about $900 million a year.

Adding to the risk of making more trucks, analysts have said, is the possibility that gasoline prices will spike. Gasoline prices have been relatively low during the North American auto industry’s recovery that began in 2010 after the recent recession.