The 5 Most Interesting Things About Donald Trump’s Dr. Oz Interview 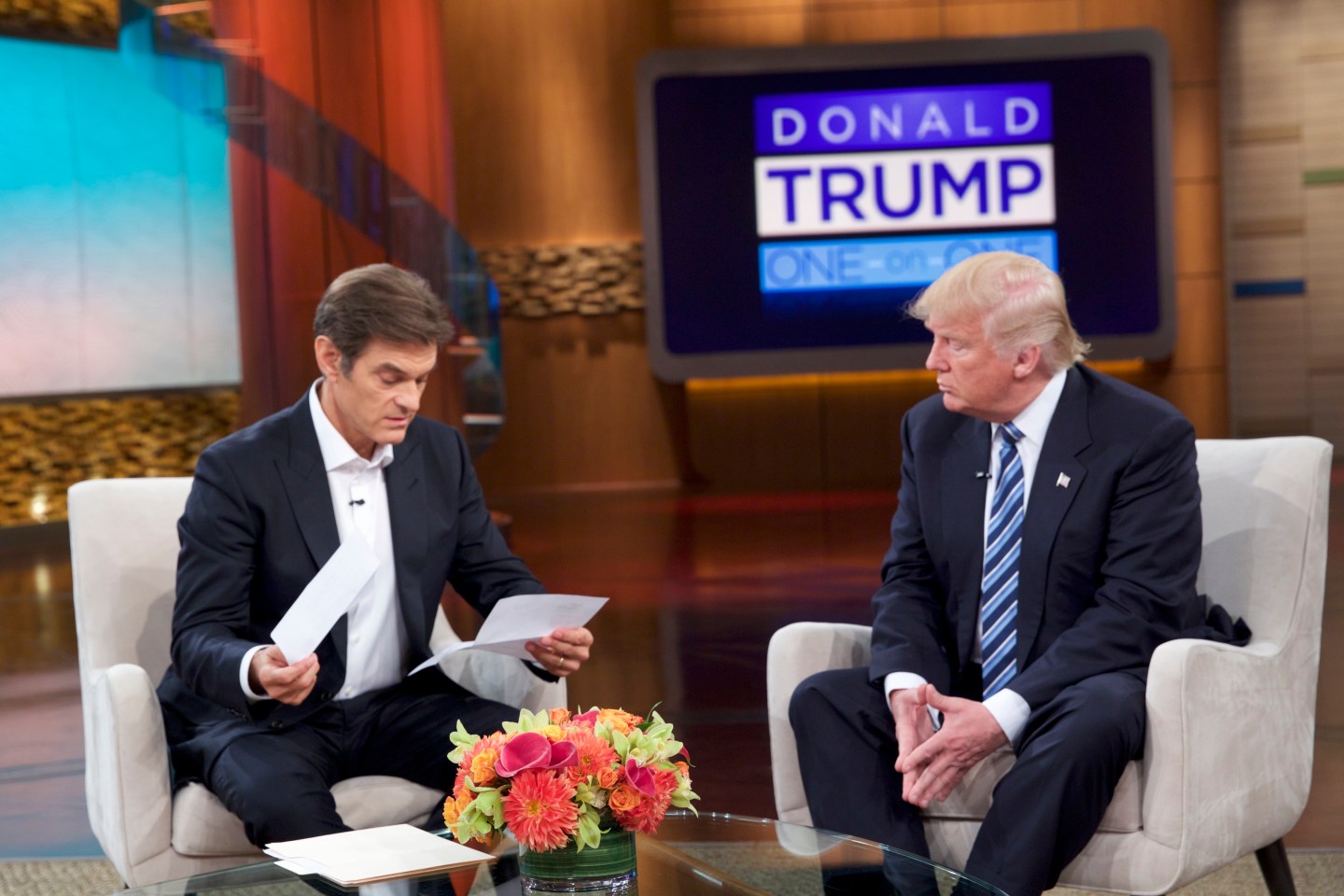 Donald Trump took to a venue close to his heart to discuss his health on Thursday: television.

The former reality show star and current GOP presidential candidate’s much-hyped interview with controversial physician and media personality Dr. Mehmet Oz aired this afternoon—one day after opponent Hillary Clinton unveiled a detailed new doctor’s note meant to defend her fitness in the wake of a pneumonia diagnosis and subsequent near-fainting spell over the weekend, which has raised voter concerns about her health.

In a dramatic moment, Trump produced a one-page summary of his latest physical (administered several weeks ago), which was written by his longtime physician Dr. Harold Bornstein.

Bornstein had been widely mocked for releasing a highly unusual letter endorsing Trump as someone who would be the “healthiest individual ever elected” to the presidency last year. Trump’s campaign eventually responded this month with a promise to release more extensive medical records from the candidate.

The summary Trump had Oz review live on air wasn’t exactly extensive or comprehensive—nor did it include any past medical records, which the campaign has implied will eventually be released. But it did include a lot more information such as Trump’s cholesterol levels, height, weight, and other blood panel results.

Here are the most interesting things we learned from the interview:

Oz went over the vital stats mentioned in Bornstein’s account of Trump’s physical and hailed them as impressive, especially for a 70-year-old man.

“If a patient of mine had these records, I’d be really happy, and I’d send them on their way,” said Oz. “I must say I would’ve shared this earlier.”

(Although Oz doesn’t have a general history of being politically outspoken, he has long donated money primarily to Republican candidates and committees, according to Federal Election Commission filings.)

According to the note, Trump has a cholesterol level of 169, including HDL (“good” cholesterol) of 63 and LDL (“bad” cholesterol) of 94. Those are numbers are, respectively, considered “desirable,” “protective against heart disease,” and “optimal,” according to the National Institutes of Health (NIH), and are likely bolstered by the fact that Trump is on a low dose aspirin and statin regimen. (He takes the cholesterol-controlling AstraZeneca (AZN) medication Crestor.)

Bornstein went on to say that Trump’s blood pressure is 116/70—below the 120/80 figure considered to be within the normal range—and had no evidence of polyps during his latest colonoscopy, performed in 2013.

The figures prompted Oz to ask Trump how old he feels when he looks in the mirror. Trump responded that he sees “a person that’s 35-years-old” before comparing himself to his friend, professional football player Tom Brady. “I feel the same age as him,” said Trump. “It’s crazy.”

He appeared to endorse expanding Medicaid

One of the most interesting moments of the interview was Trump’s apparent embrace of expanding Medicaid, the federal health program for the poor that has been significantly ramped up under Obamacare and is typically a political punching bag for Republicans.

Oz asked Trump what he would do to address the health needs of poorer Americans who may fall through the cracks. “We have to go an help them through the Medicaid system, help them publicly,” Trump responded.

That’s not just at odds with traditional GOP orthodoxy; it appears to contradict the policy position listed on Trump’s campaign website, which endorses turning Medicaid into a purely state-run block grant program that would involve the federal government handing over a lump sum of cash to states. Block grant proposals are usually lambasted by Medicaid proponents as a way for state governments to cut benefits and introduce more restrictions on who is entitled to Medicaid coverage.

Trump also said that he’d have Obamacare replacement plans “that you don’t even know about right now.”

Fortune has reached out to the Trump campaign for clarification regarding his Medicaid comments and will update this post if it responds.

In another departure from the Republican policy platform, Trump said that birth control “should not be prescription” and that it should be available over-the-counter since many women “just aren’t in a position to go get a prescription.”

The Food and Drug Administration (FDA) has endorsed over-the-counter birth control sales, and the 2016 GOP platform opposes the agency’s position.

Although Donald Trump’s father, Fred Trump, lived into his 90s, the elder Trump suffered from Alzheimer’s disease at the end of his life. Trump defended his genetic heritage and his parents’ longevity. He argued that although his father had Alzheimer’s, “Physically, he was unbelievable.”

Trump’s physical summary made no mention of his mental health, which has been a controversial area of speculation during the 2016 campaign.

One area where Trump appeared not to budge was in his support for a border wall with Mexico to staunch illegal immigration. Oz asked whether or not undocumented immigrants who collapsed on the streets should be provided with health care and if there was a “moral obligation” to help such people.

“Under my plan, the undocumented, or as you would say, illegal immigrants wouldn’t be in the country,” Trump responded. “They only come in the country illegally.”

That answer doesn’t really address how Trump would handle the millions of undocumented immigrants who are already in the United States. And it wasn’t the only moment when Trump deferred to his immigration stance in reply to a health care question. Referring to the ongoing prescription opioid and heroin epidemic in America, Trump suggested that his immigration policies would prevent heroin from even crossing over into the U.S., promising to stop the drugs at the border.