Hanjin Shipping’s Crisis Is Causing a Trailer Shortage in the U.S. 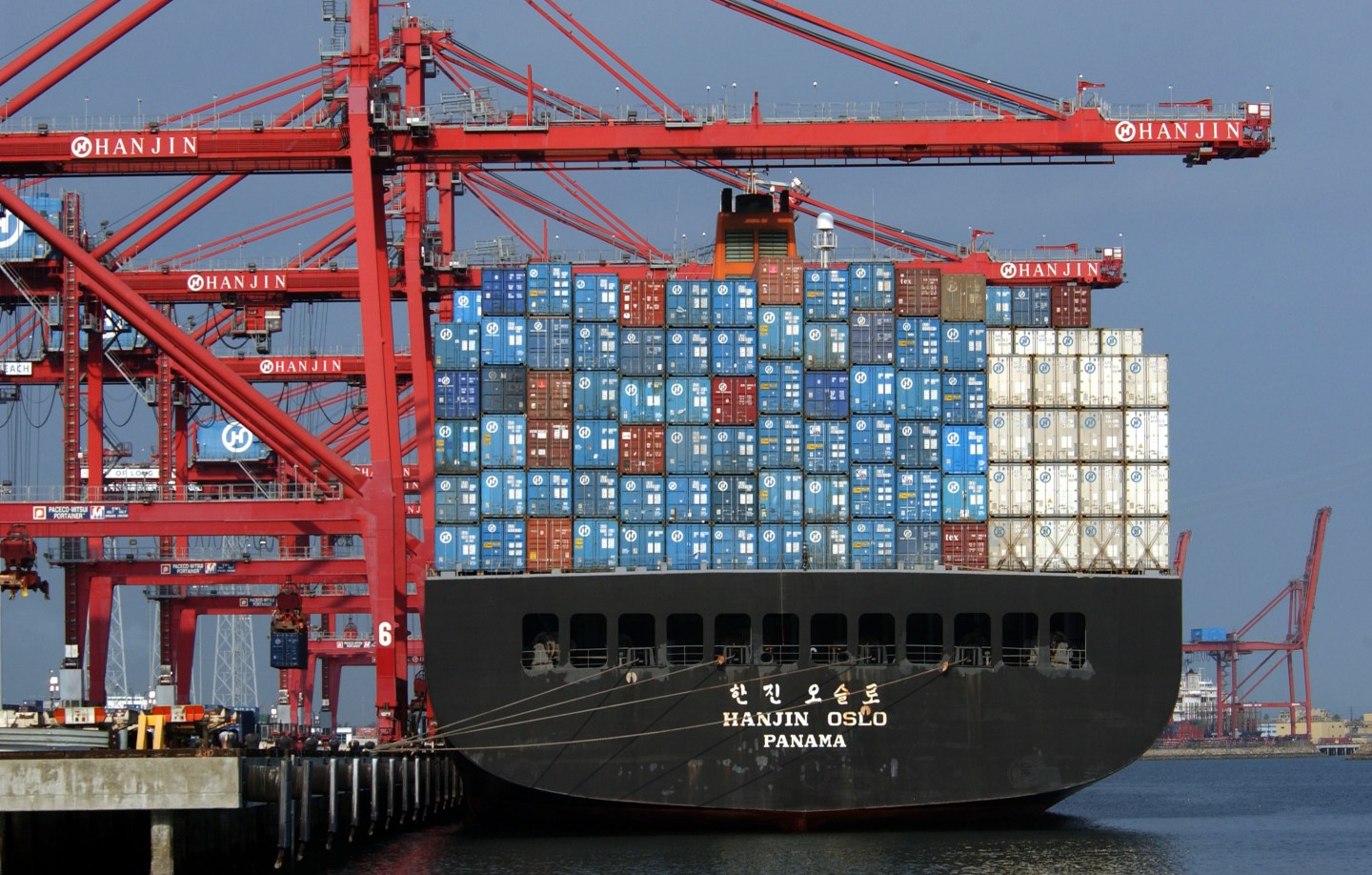 The bankruptcy of Korea’s Hanjin Shipping is causing ripple effects for importers bringing goods from Asian factories to U.S. malls by creating a shortage of trailers to move ocean-shipping containers on U.S. roads.

The world’s seventh-largest container carrier has more than 500,000 containers, and many already are clogging up ports and truck yards, tying up trailers that cannot be used to handle other cargo. That is beginning to worry freight handlers at U.S. West Coast ports and is the first sign of knock-on effects from the failure of Hanjin.

The problem stems from Hanjin’s shortage of cash, which has stranded $14 billion of cargo owned by companies such as HP Inc (HPQ), Home Shopping Network and Samsung Electronics (SSNLF). Much of the cargo is on more than 100 ships at sea because cargo handlers, tug operators and ports are refusing to work with Hanjin unless they get paid up front.

A lawyer for the shipper did not immediately respond to a request for comment.

Terminal operators in the California ports of Long Beach and Oakland are not taking back empty containers. Many in the industry doubt Hanjin will pay storage costs, and a growing number of empty containers and the trailers they sit on are stranded.

“If it’s not fixed in the next couple of weeks, I think you’ll see a huge ripple effect across the industry,” said Weston LaBar, executive director for the Harbor Trucking Association in Long Beach, California.

LaBar said there are thousands of Hanjin containers on trailers out of circulation, and the uncertainty surrounding Hanjin appears to be pushing truckers to lock in trailers from his organization’s pool.

“We doubled in bookings this morning,” LaBar said. “We have availability, but we’re getting to the point where we may be leased out for our chassis.”

Shipping executives said there is ample supply of shipping containers, but trailers are limited. The West Coast ports previously have experienced brief shortages even when the stream of trade is functioning normally.

The Hanjin collapse has exacerbated the problem.

At GSC Logistics, Chief Executive Officer Scott Taylor said he is stuck with nearly 80 empty Hanjin containers on trailers, racking up charges for cargo owners, that his company processed recently and could not return to a terminal operator at the Port of Oakland.

“If it says Hanjin on the side, there’s no place for it to go right now,” said Taylor.

See also: Three Hanjin Ships Are Sold As Its Terminal Edges to a ‘Standstill’

Grocery chain Kroger (KR) told Reuters it has 880 shipping containers tied up on Hanjin ships. The company’s lawyer, Ron Liebman, on Friday told a U.S. judge who is overseeing Hanjin’s U.S. bankruptcy case that Kroger does not expect to be able to return the containers once it receives its products, creating a headache and added costs for the company.

Empty containers were sitting on trailers, said Jonathan Gold, vice president of supply chain and customs policy for the National Retail Federation. “This is causing problems with the terminal operators and truckers who need the equipment” to haul full containers, he said.

Karen Vellutini, a vice president at Devine Intermodal, a trucking company in West Sacramento that services the Port of Oakland, said she expects the availability of trailer chassis to become a problem as the holiday season nears and as more Hanjin ships arrive in ports and unload containers.

“We’re not seeing it yet, but it’s inevitable,” Vellutini said. “This problem is going to compound.”

In Southern California, shipping industry executives are discussing setting aside a staging area where truckers could drop off empty containers to free up trailers, said Mario Cordero, chairman of the Federal Maritime Commission, which regulates carriers, terminal operators and ports.

“They are trying to address what could be even a greater crisis as these numbers mount,” Cordero said.

“If those chassis get all occupied, or a good percentage of them, where the containers are just sitting on them with nowhere to deliver, that disrupts the supply chain,” Cordero said. “We are certainly reaching the level we are concerned.”

The commission is monitoring prices to make sure fees for leasing trailers do not become excessive amid the Hanjin problems, Cordero said.

Vellutini of Devine Intermodal said cargo owners could resort to buying the containers they are holding to clear up any legal uncertainty around them and to return chassis.

“People are waiting for the dust to settle to decide if they’ll buy and get into the used container business.”