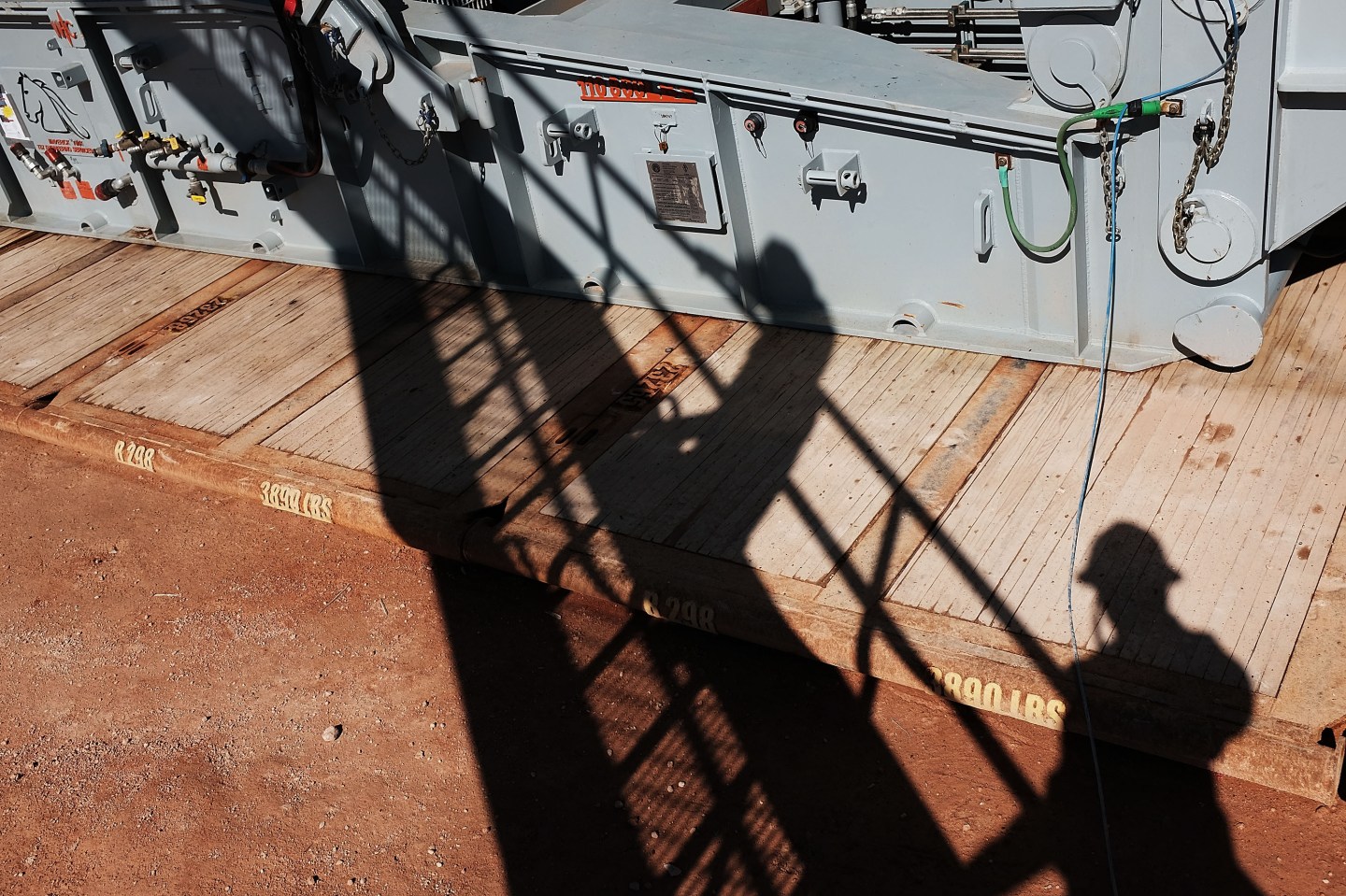 MENTONE, TX - FEBRUARY 05: The shadows of workers with Apache Corp. are viewed at the Patterson 298 natural gas fueled drilling rig on land in the Permian Basin on February 5, 2015 in Mentone, Texas.The rig, which is only 21 days old, is the first drilling rig in Texas that is 100-percent fueled by natural gas. As crude oil prices have fallen nearly 60 percent globally, many American communities that became dependent on oil revenue are preparing for hard times. Texas, which benefited from hydraulic fracturing and the shale drilling revolution, tripled its production of oil in the last five years. The Texan economy saw hundreds of billions of dollars come into the state before the global plunge in prices. Across the state drilling budgets are being slashed and companies are notifying workers of upcoming layoffs. According to federal labor statistics, around 300,000 people work in the Texas oil and gas industry, 50 percent more than four years ago. (Photo by Spencer Platt/Getty Images)
Spencer Platt/ Getty Images

Apache (APA) announced a major oil discovery in Texas on Wednesday, the latest sign the strongest shale companies are not only surviving the steepest price crash in a generation, but growing despite it.

Apache‘s shares spiked as much as 14% to $58.99 in early trading after the company said it had assembled contiguous parcels of more than 300,000 acres for $1,300 an acre in the field it calls “Alpine High,” most of which is in Reeves County, Texas.

The price is a bargain compared to deals done for as much as $30,000 an acre in other parts of Texas. Improved technologies and efficiencies will allow Apache to exploit the area, an overlooked part of the otherwise expansive Permian Basin, the top U.S. oilfield with multiple layers of oil-bearing rock.

To start developing the field, Apache raised its 2016 budget to $2 billion from $1.8 billion, making it one of a dozen or so leading shale producers to raise spending this year as many weaker peers fell into bankruptcy.

See also: Hillary Reportedly Raises ‘Twice As Much’ From the Oil Industry As Trump

Apache estimated that its acreage holds about 75 trillion cubic feet of mostly wet gas and 3 billion barrels of oil in the Barnett and Woodford regions of the field. It also said there is significant oil potential in the shallower Pennsylvanian, Bone Springs and Wolfcamp formations.

The company cautioned that it has yet to determine the precise boost to proved reserves.

“This really is a giant onion that is going to take us years and years to peel back and uncover,” Chief Executive Officer John Christmann told analysts at a Barclays conference on Wednesday.

“This is a world class resource. You’ve got reservoir consistency, continuity, which is going to lead to very repeatable and predictable drilling results and targets.”

Apache said it would develop wells with average lateral lengths of 4,100 feet. Each well will cost about $4 million to $6 million, about half what they cost before oil prices slumped in mid-2014.

See also: Pipelines: The Worst Way to Move Oil, Except For All the Rest

Apache said it has identified 2,000 to 3,000 drilling locations that can make money at $50 a barrel oil and $3 per thousand cubic feet of natural gas. The field has just 19 wells on it now.

To move product to market, Apache needs to install gas processing infrastructure in the field, beginning with temporary capacity in the second half of this year.

The find may cement Christmann’s legacy at Apache.

He cut his teeth in the Permian Basin and ran Apache‘s onshore division before being named CEO in January, 2015. His goal was to refocus the company, which analysts worried was distracted by international expansions and expensive liquefied natural gas projects under his predecessor.

Just before announcing the latest find, Apache had changed its accounting methodology to one that allows it to capitalize costs associated with discovering new oil and gas reserves.

“This discovery speaks to companies that have positions in core parts of plays that are much more resilient than people had thought,” said Benjamin Shattuck of Wood Mackenzie.