What Self-Driving Cars Will Mean for Automakers’ Stocks 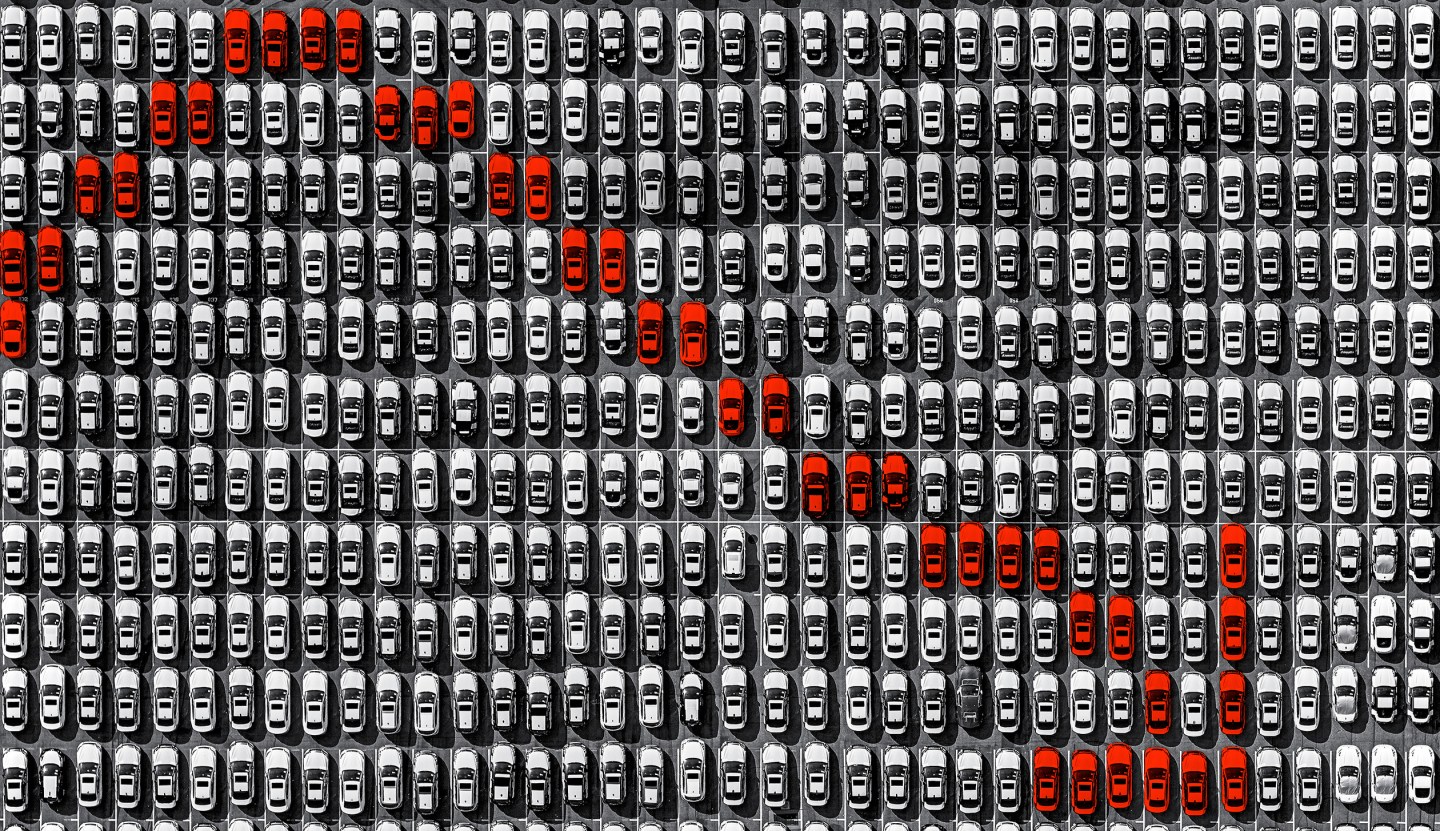 One of the auto industry’s worst attributes, from an investor’s standpoint, is its predictability. While car companies benefit when the economy rises, the road always turns back downhill, and automobile sales inevitably shift into reverse.

Industry watchers can see this dynamic playing out right now, even as 2017 models begin to roll onto dealers’ lots. In the first half of this year the auto industry’s revenues hit $151.8 billion, up 7.8% from the previous year. Vehicle sales are on pace to top the nearly 17.5 million cars and trucks sold in 2015. But the current run is “in extra innings,” says Adam Jonas, an analyst for Morgan Stanley: After six years of almost uninterrupted growth, August car sales dropped a sobering 4% year over year. And investors are already anticipating the end of the party. The S&P 500 Automobile Manufacturer’s index has dropped 8% this year. Shares of General Motors, Ford, Fiat Chrysler (FCAU), Toyota (TM)—heck, even tech darling Tesla—are all well below their 2014 or 2015 peaks.

So are auto stocks doomed to the same old repetitive commute from peak to trough? Maybe not. As cars become the epicenter of innovation, there’s a factor in play this time around that was absent the last time carmakers struggled. That, of course, is the rise of autonomous-driving technology, which could upend the business model of the industry in the not-too-distant future—in ways that carmakers and their investors could profit from. While it’s far too early to pick winners in the self-driving-car arms race, the current down cycle in auto stocks could let investors place some early bets at bargain prices.

Auto industry ­insiders believe that in a world where self-driving tech becomes commonplace, the whole culture of driving will shift. Fewer people would own vehicles, and more would rent cars only when needed. (Think Uber, all the time, but driverless.) On the surface that sounds like a 70-car pileup in the making for automakers: Fewer car sales, after all, should mean less revenue.

For more on the auto industry, watch this Fortune video:

But there are two factors that ease the pessimism. The first is that any shift will be both gradual and incomplete. Car-­sharing works best in densely packed cities like New York or San Francisco, for example. And autonomous driving won’t fit the needs of all drivers, so the automakers will still have a big “traditional” car customer base for a long time.

What’s more, some analysts believe an autonomous-driving culture may actually give automakers a more profitable business model—one in which they sell services as well as vehicles. Citigroup (C) analyst Itay Michaeli says automakers will profit not just by selling vehicles (to consumers and to ride-sharing services) but also through “revenues per mile” driven. Ford or GM could sell you or rent you the ride, and sell you services you consume while you’re not driving (streamed movies, for example). Michaeli says this model could let car manufacturers bring in double the amount of variable profits that they make today, and better yet, move “beyond the cycle” of consumer-driven peaks and troughs.

There’s one big problem with this theory: “Somebody has to create a compelling business model,” says Susquehanna International Group analyst ­Matthew Stover, and nobody has done it yet. So while automakers angle to make it happen—whether through partnerships, R&D, or acquisition—investors should think of any present-day auto stock play as both a bet on today’s car industry and a very speculative bet on the future.

Among the companies with a big U.S. market presence, General Motors (GM) has made the biggest public commitment to the new generation of driving tech. Along with other moves, it has invested $500 million in ride-sharing service Lyft and spent just over $1 billion to acquire Cruise Automation, a Silicon Valley startup that makes sensors and software for self-driving cars. Investing in GM based on those factors alone would be “a really speculative move,” notes Annie Rosen, portfolio manager of the Fidelity Select Automotive Portfolio. But it looks like a decent buy for other reasons. At under $32 a share, GM trades at just above four times earnings, which is far below the industry average of nine (and of course, far below the S&P 500’s absurd 20). Welcome to life in the auto cycle. GM has authorized $9 billion to buy back stock through the end of 2017: It’s trying to convince investors that it will still grow its earnings, even if a recession occurs. “When you went bankrupt last time” there was a recession, Stover says, “the market is not going to give you the benefit of the doubt.”

If investors have avoided GM of late, they’ve absolutely punished Ford Motor (F). Its shares have fallen 28% over the past 18 months, partly because the company made an ill-timed bet on eco-friendly cars, which haven’t sold as well since the price of gas plummeted. Through August, sales of the Fiesta and Focus, which feature Ford’s climate-friendly EcoBoost engine, are down 17% for 2016, and Ford’s sales for that month were down 8% year over year. “The stock has been under really great pressure,” says Stover, who adds that “Ford has validated the fears” by downgrading its outlook.

The sales slowdown hasn’t stalled Ford’s plans on the autonomous-­technology front, though. The company has targeted 2021 as the year it will release a vehicle without a steering wheel or pedals, working with four startups to accomplish the feat. Morgan Stanley’s Jonas says that relatively speedy timetable is intended to give Ford an edge in the “fight for brains,” as it competes with Apple (AAPL), Alphabet (GOOGL), other tech firms and the rest of Big Auto to attract software talent.

No discussion of New Age vehicles can leave out Tesla Motors (TSLA), since CEO Elon Musk’s pioneering firm already offers some—limited—autonomous technology in its cars through its autopilot feature. Tesla hasn’t been as vulnerable to economic cycles as other auto­makers, since its luxury-oriented customers can afford to pay $90,000 or more for a vehicle. Its Model 3 version, which will start at around $35,000, is scheduled for delivery in late 2017; that, oddly enough, could make the company more recession-sensitive, as average-income consumers become customers. But given its still hypothetical profits—and its growing cash-flow problem, which ­Fortune has detailed—many investors are wary of Tesla’s stock at its current prices. The company’s impending acquisition of SolarCity also muddies the investing outlook. The fact that a future Tesla would sell not only vehicles and car batteries but also solar panels “dilutes the whole story,” says Bill Selesky of Argus Research.

Investors should think of any auto stock play today as a more than usually speculative bet on the future.

The Tesla saga just underscores how hard it is to find autonomous-driving “pure plays” among publicly traded companies. Most makers of back-end autonomous sensors and software are fairly widely diversified. For example, Delphi Auto­motive (DLPH), the big maker of electronic, engine, and safety systems, creates sensors for autonomous driving, including some used in a pilot project by the Singapore Land Transport Authority. But its autonomous efforts account for no more than 2% of its $15 billion in annual revenue right now. “We see them as well positioned” as the technology unfolds, says Jonas, but “not a safe haven” against traditional cycles in the auto market.

MobilEye may be the only pure autonomous play available. That company makes software and sensors that primarily work at what regulators call the tier-2 level of autonomy, where cars handle some functions on their own—the level you’re likely to see soonest on dealers’ lots. But as car companies build software internally, Mobileye’s market share could drop. Plus, the stock is not cheap.

The evolution of the auto industry over the next decade is going to be fascinating to watch. But it will be a long time before it creates any investing slam dunks.

Gearing up for a long drive

It’s likely to be a decade or more before self-driving technology makes a significant impact on the revenues of automakers and auto suppliers. But that isn’t stopping big companies in the field from souping themselves up for the race to come.

Big Tech Plays: Aims to release a vehicle without a steering wheel or pedals by 2021.
Big Picture: Ford’s stock has tumbled by almost a third over the past 18 months, due in part to the oil crash—the company made a big commitment to smaller cars, whose popularity has declined as gas prices dropped. Of course, what goes down may come up again; in the meantime Ford pays a dividend of nearly 5%.

Big Tech Plays: Acquiring SolarCity in a move that, among other things, could make Tesla’s battery technology cheaper and more powerful.
Big Picture: The arrival of the mass-market-oriented Model 3 late next year could be the turning point that boosts the company to profitability. But some investors fret that the SolarCity deal could muck up the company’s finances.

Big Tech Plays: Testing its sensors in self-driving cars in Singapore.
Big Picture: Self-driving tech accounts for no more than 2% of Delphi’s revenue, but its deep experience in automotive electronics and safety systems could give it an advantage in the long run. Morgan Stanley auto stock analyst Adam Jonas sees Delphi as “well positioned” for the technology’s evolution.