EU Commissioner Warns Other Firms Could Get Apple Tax Treatment 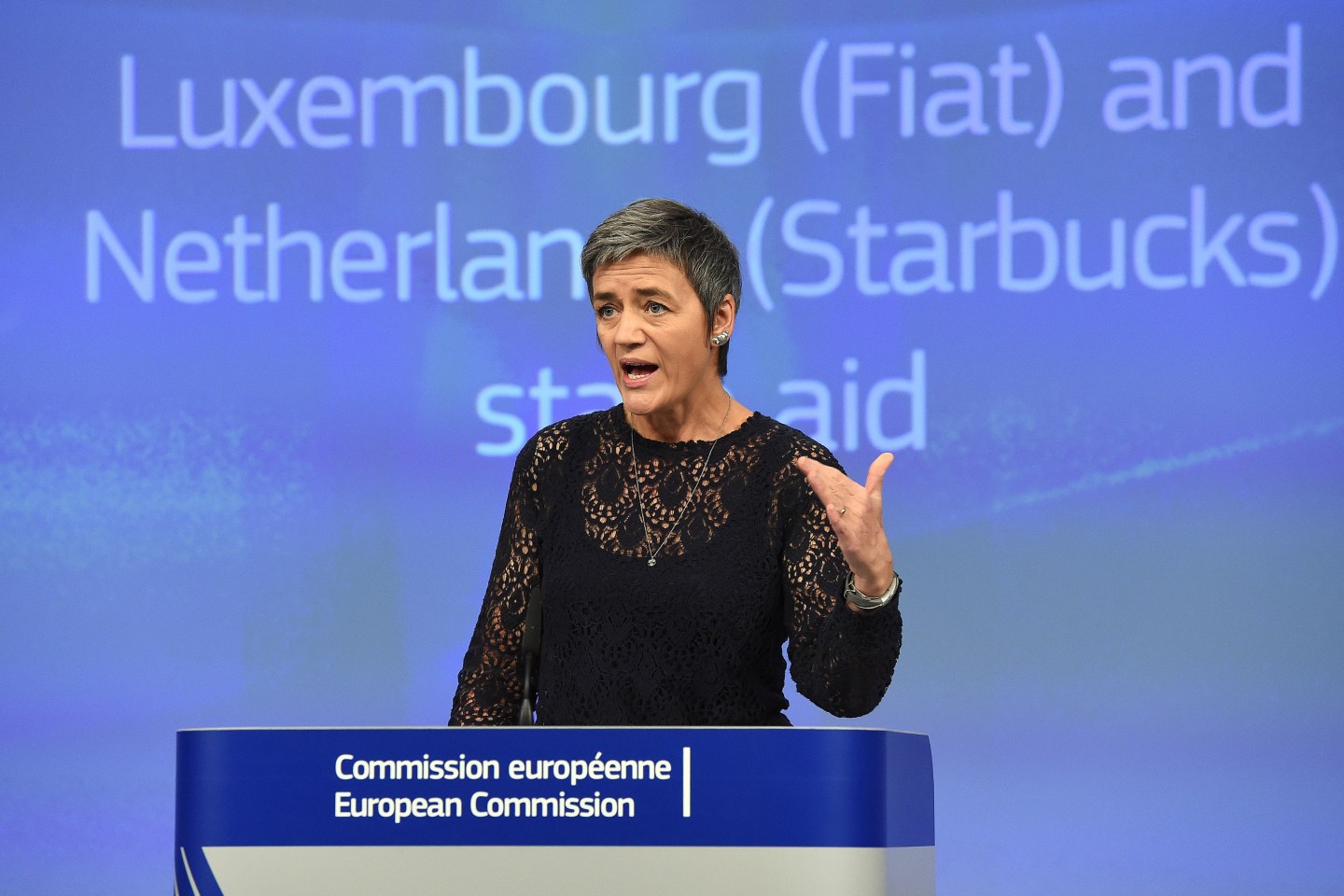 European commissioner for competition Margrethe Vestager holds a press conference on the EU decision to set out a template for recovering unpaid taxes and preventing tax avoidance by multinationals at the European Commission in Brussels on October 21, 2015. The European Union ordered Starbucks and Fiat to each repay up to 30 million euros in back taxes in a landmark tax avoidance case pursued in the wake of the LuxLeaks scandal. AFP PHOTO / EMMANUEL DUNAND (Photo credit should read EMMANUEL DUNAND/AFP/Getty Images)
Photograph by Emmanuel Dunand — AFP/Getty Images

Other multinationals that do not employ as extreme Irish tax schemes as Apple but shift profits via the country to tax havens could also be breaching EU rules, Competition Commissioner Margrethe Vestager said on Thursday.

She handed the iPhone maker a record 13-billion-euro bill for Irish registered units that Dublin authorities accepted were liable to tax in no country on Tuesday.

She told Reuters in an interview that other firms’ arrangements, which involve routing profits to Irish-registered subsidiaries tax resident in places like Bermuda, might fall foul of the Commission on similar grounds.

“Taxes have been paid nowhere due to the Irish tax code,” she said.

Asked if the bill would have been different if the head office of Apple’s Irish unit been registered and paid tax in Bermuda, Vestager said: “not much.”

Vestager said the core of the case against Apple (AAPL) was that it had an Irish registered company that booked most of the profits generated across Europe.

However, since Ireland didn’t deem the subsidiary tax resident there, the unit was able to report just a small taxable income at an Irish “branch.”

Apple’s chief executive, Tim Cook, and Washington have denounced the Commission ruling as an unjust raid on tax that should be paid in the United States. Apple’s chief financial officer, Luca Maestri, told reporters on Tuesday that the assertion that Apple doesn’t pay taxes anywhere on much of its profits is “simply wrong.”

“These are profits that are taxed in the United States, and for anybody that understands the U.S. worldwide tax system, this is very easy to understand,” Maestri said. “We actually accrue those tax liabilities on our balance sheet on an ongoing basis and we’ve done it consistently over the years.”

Vestager said if Washington chose to tax the profits reported by Apple’s Irish operation, she would reduce her demand accordingly.

The United States could do this by forcing Apple to have its Irish units pay more in fees to Apple in California for the right to license Apple patents.

Vestager said, however, that the bill would not be affected if Apple next year moved funds from its Irish units to the United States by paying dividends, even though in this case, the dividends would be taxed.

She declined to discuss which other companies’ affairs were being looked at by her staff beyond two publicly announced and outstanding investigations into Amazon (AMZN) and McDonald’s (MCD) in Luxembourg.

She said that since being alerted to Apple’s methods and other cases by a U.S. Senate probe in 2013, the Commission has been looking through about 1,000 such instances in the EU.

She dismissed accusations from Apple’s Cook and others that her decision was politically motivated or driven by anti-American populism. While U.S. companies have been investigated, she said, most of 35 firms probed over tax in Belgium were from Europe, and those still being looked at were a broad sample.