It’s Time to Start Worrying About a Frexit 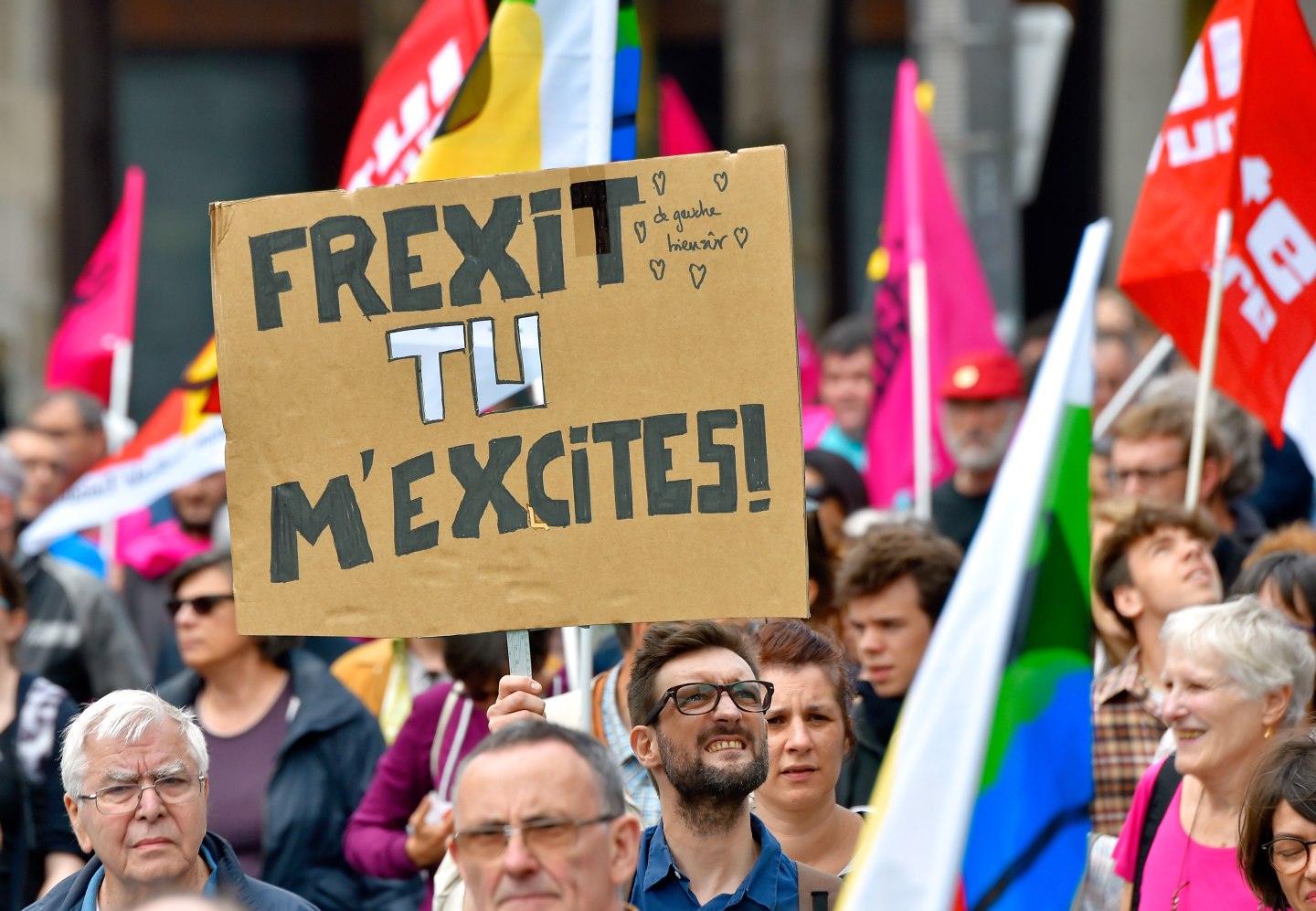 A demonstrator holds a placard reading "Frexit you excite me!" during a protest against controversial labour reforms, on June 28, 2016 in Nantes, western France. People took to the streets in France on June 28 in the latest protest march in a marathon campaign against the French Socialist government's job market reforms. Last month the government used a constitutional manoeuvre to push the bill through the lower house without a vote in the face of opposition from Socialist backbenchers. / AFP / LOIC VENANCE (Photo credit should read LOIC VENANCE/AFP/Getty Images)
Loic Venance — AFP/Getty Images

“Brexit” has made it clear that Europe’s postwar trend toward integration is no historical inevitability. Crises once dismissed as mere speed bumps on the road to an ever closer union now have the potential to unravel the project even further. The stakes are high: Brexit involves renegotiating a few trade deals, but if a country that uses the euro leaves the union, the world economy may have a real meltdown to deal with. Here, the three votes that are keeping EU leaders up at night.

The first challenge to the EU since Brexit is right around the corner. Austria must rerun the presidential runoff vote between the anti-immigrant Freedom Party’s Norbert Hofer and the liberal former Green Party leader Alexander Van der Bellen on Oct. 2. With only 8 million people and a GDP one-tenth the size of Germany’s, Austria couldn’t bring the EU down directly, but its disenchantment with established parties and popular anger at the management of the migrant crisis make it a microcosm of the angst that could spell the union’s downfall.

Italy is likely to hold a referendum on electoral reform in late November. It’s not an exit vote per se, but like former U.K. leader David Cameron, Prime Minister Matteo Renzi may find that it mutates into a plebiscite—in Italy’s case on a status quo dominated by stagnation, chronic unemployment, and an increasingly acute banking crisis. Renzi has pledged to resign if the tally doesn’t go his way, and the Five Stars Movement, which wants Italy out of the eurozone, stands waiting to exploit the situation.

For more on the effects of Brexit, watch this Fortune video:

The EU might—just—survive an Italian-led assault on the eurozone. It could not conceivably survive in its current form if France elects National Front leader Marine Le Pen to the presidency next May. Le Pen is campaigning for a wholesale renegotiation of the EU’s treaties, restoring the primacy of national law, declawing the European Central Bank, ending free movement, and effectively killing the Single Market.

A version of this article appears in the September 1, 2016 issue of Fortune.