Why Millennials Don’t Like Donald Trump or Hillary Clinton 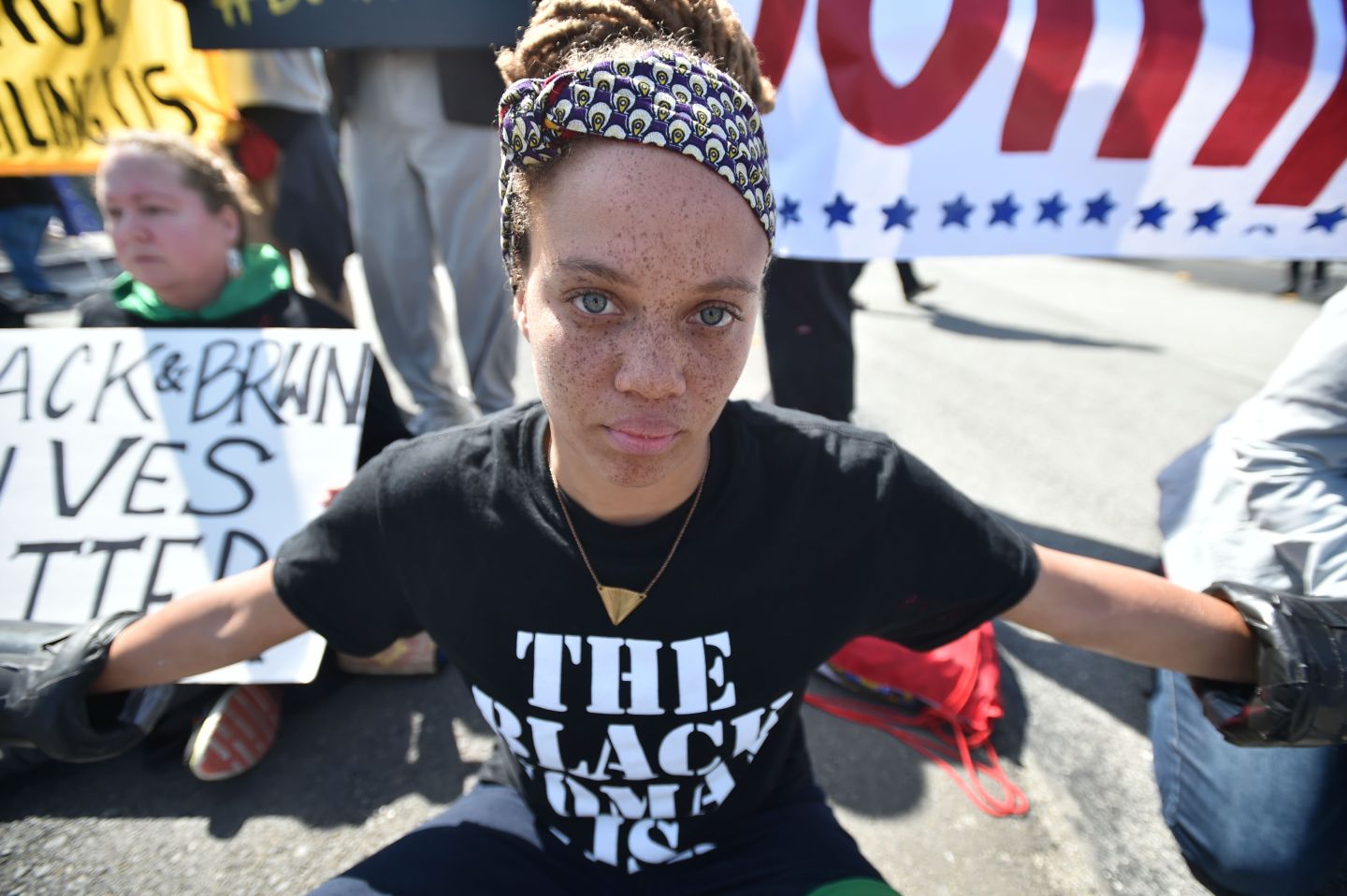 Shayna Cureton looks at the camera while sitting in an interlocked chain of people blocking a street during a protest outside the Hyatt Regency Hotel where US Republican presidential candidate Donald Trump was speaking in Burlingame, California on April 29, 2016. Hundreds of protesters jostled with police in riot gear outside a California hotel where Republican presidential frontrunner Donald Trump was to give a speech, forcing the candidate to duck into a back entrance. / AFP / Josh Edelson (Photo credit should read JOSH EDELSON/AFP/Getty Images)
Photography by JOSH EDELSON AFP/Getty Images

Millennials voted for Ted Cruz, Marco Rubio and Bernie Sanders in the primaries. But they got Donald Trump and Hillary Clinton instead as their candidates.

Millennials gave Clinton less than 30% of their votes in key primaries and nearly precipitated her defeat nationwide. Trump won 20%-30% of millennial voters in key GOP primaries, generally behind both Cruz and Rubio. Young voters have already delivered both candidates an unambiguous rebuke.

Grassroots organizing, usually bolstered by young volunteers, is in shambles. Recently dozens of young RNC staffers left in protest of the Trump candidacy. Now, the GOP risks losing not just the White House but also the House and Senate.

See also: Donald Trump’s Immigration Reform May Be Less Severe Than We Thought

For many young conservatives, Trump’s values are a deal breaker. Whereas millennials tend to identify as optimistic, tolerant of diversity and authentic, Trump vilifies undocumented immigrants, has threatened to ban Muslims from immigrating to the United States, and frequently taunts women. Trump’s flagrant insults and racism directed toward minority groups makes him an anathema to young voters.

“I didn’t want to be associated with the Trump campaign,” one former RNC staffer, who asked to remain anonymous, told Politico. “I don’t agree with what he has to say … He’s not a person I feel comfortable working for. It’s just that simple.”

For Democrats, who traditionally rely on young voters as a core part of their coalition, the picture isn’t much prettier. As recently as late June, just 55% of Sanders voters said they would vote for Clinton; recent polling data shows just 41% of young voters are supporting Clinton.

The big fear for Democrats is not that millennial voters will support Trump – as Clinton widens her lead, this is increasingly unlikely – but that not enough millennials will show up in November.

Historically, young voters are less likely to turn out than their parents. There are a number of reasons for this: 1) Having never voted before, the default setting for many young people is not to vote, 2) Young voters are busy with school, starting families and with their first jobs. Politics (and taxes) are not yet a priority and 3) Politicians are less likely to campaign to millennials or address their issues, creating a negative feedback loop that discourages political participation.

Hillary Clinton recently launched a Millennial Engagement Program to address this issue. The team will set out with the explicit goal of encouraging young people to get the polls. Clinton’s staffers will leverage Obama and Sanders’ endorsements to rile up young voters. They will likely also highlight Clinton’s support for debt free college education and gun control, which are both critical issues for young voters.

At the end of the day, the success or failure of this approach will lie in Clinton’s ability to build a grassroots army. Thus far, the results are lackluster; Team Hillary lacks the gleam or enthusiasm of Obama and Sanders. For Clinton, never a darling of young voters, this is an uphill battle. Rather than give up or shift her focus elsewhere, Clinton needs to double down on this effort. It will make or break her campaign.

For Trump, the priority now needs to be on controlling the bleeding. Young voters consistently rank the economy as their #1 priority. And most voters (including millennials) believe Trump is the best candidate to improve our economy, according to Gallop. If the Trump campaign can focus on this message – instead of racism, immigration, and “Obama created ISIS” – he can shore up millennial support. To this end, Trump should leverage his children – especially Ivanka, whose charismatic RNC address stole the show – when campaigning to millennials.

Bottom line: The outcome of this election hinges on the candidates’ ability to get young voters to polls. Uninspiring candidates make voter turnout all the more vital – and difficult to predict.

David Cahn and Jack Cahn are twin brothers, undergraduates at the University of Pennsylvania’s Wharton School and co-authors of When Millennials Rule: The Reshaping of America (Post Hill Press, August 2016).