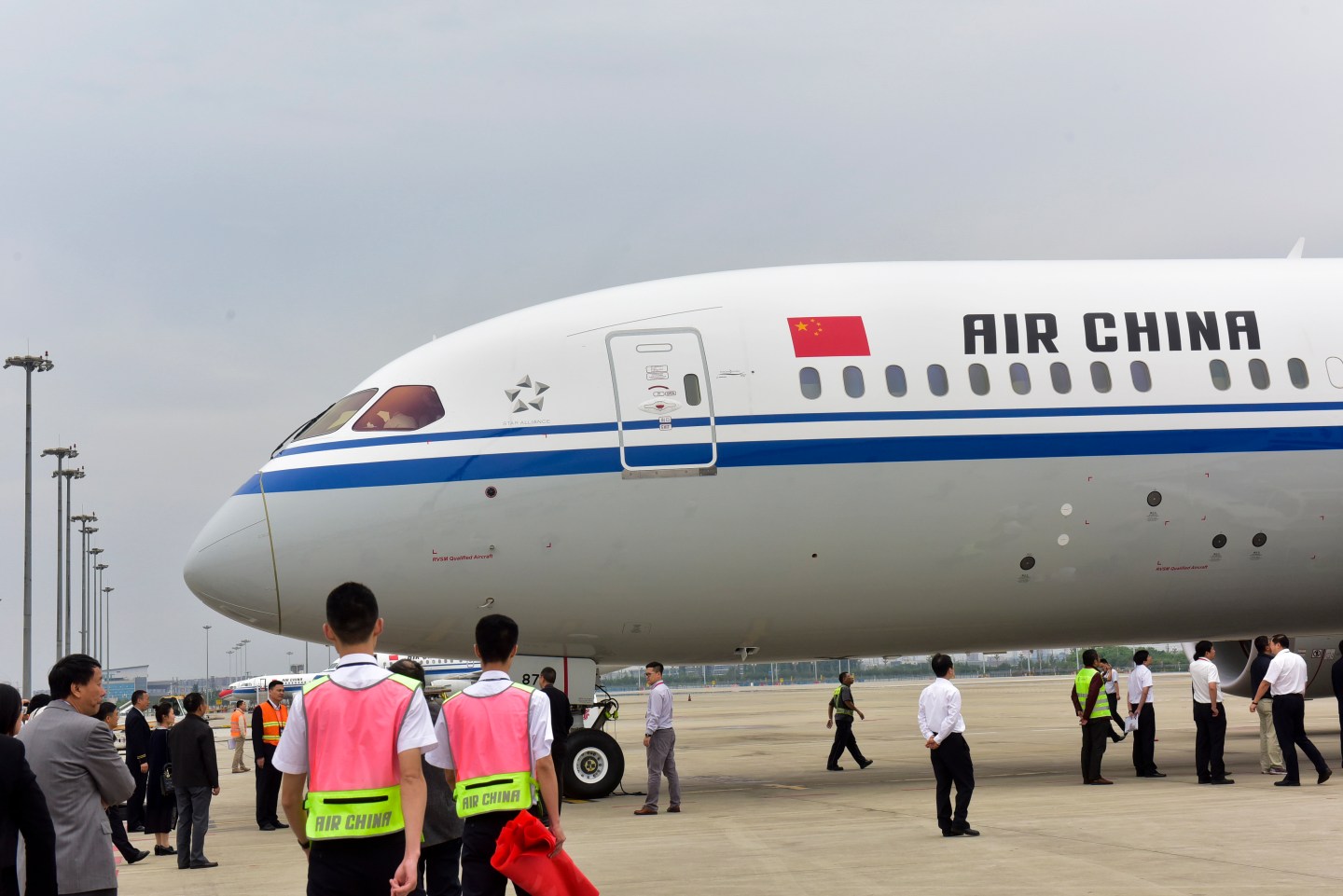 CHENGDU, CHINA - MAY 26: (CHINA OUT) The photo shows the Boeing 787-9 Dreamliner at Chengdu Shuangliu International Airport on May 26, 2016 in Chengdu, Sichuan Province of China. China's first medium-sized Boeing 787-9 Dreamliner aircraft purchased by Air China from Boeing Factory, America, makes the first flight named CA4102 from Beijing to Chengdu after nearly three hours on Thursday. The Boeing 787-9 is the latest model of Boeing 787 series. Air China will schedule the aircraft to operate Beijing-Shanghai, Beijing-Guangzhou, Sanya-Beijing-Frankfurt, Beijing-Rome routes in the future. (Photo by VCG/VCG via Getty Images)
VCG/VCG via Getty Images

Boeing (BA) is not experiencing any slippage in demand for jetliners in China, despite the country’s sluggish pace of economic growth, a senior Boeing executive said on Wednesday.

“We’re watching it close,” Mounir added, since global economic conditions could shift. “But if I just look at the Chinese market as it stands today, I’m not seeing any signs of weakness whatsoever.”

The comments came after other U.S. industrial companies recently reported weak sales growth in China and suggested the weakness could extend through the end of 2016.

Global demand for widebody aircraft has also slowed, raising concerns about sales growth at Boeing and rival Airbus (AIRBUS-GROUP-N-V). Boeing said last week it may further cut production of widebody 777 jetliners and not increase output of 787s unless sales improve.

A strong exchange rate for Japan’s currency has slowed some of China‘s tourism to Japan, said Hideki Kunugi, ANA’s senior vice president for the Americas. But he said ANA’s decision to expand its capacity and its network in China is supported by demand.

ANA took delivery on Wednesday of a new 787-9, the mid-sized version of Boeing‘s high-tech, long-haul Dreamliner aircraft. The jet seats 290 passengers in a two-class configuration and carries a list price of $264.6 million, though airlines typically negotiate discounts.

ANA is experiencing robust growth in business travel from Japan to Latin America, Kunugi said, adding that it plans to launch a route from Tokyo to Mexico City in February 2017 using the 787 as part of its LatAm strategy.

“Our current main target will be Tokyo and Mexico and onward,” he said.

More than 900 Japanese companies have investments in Mexico and the number is expected to grow to over 1,000 this year, he said. ANA plans to capture more of the travel market using the Mexico City route, its current Tokyo-to-Houston flight and connecting services, Kunugi said.

The 787 used on the new route will be equipped with specially configured engines that are able to provide extra thrust needed for takeoff from the high-altitude Mexico City airport in hot weather, he said.

Engine maker Rolls-Royce Holdings (RYCEY) is working on the modifications, which should be ready in time for the launch of service in February, Kunugi added.