Why VW Is In Deep Crisis — And GM Isn’t 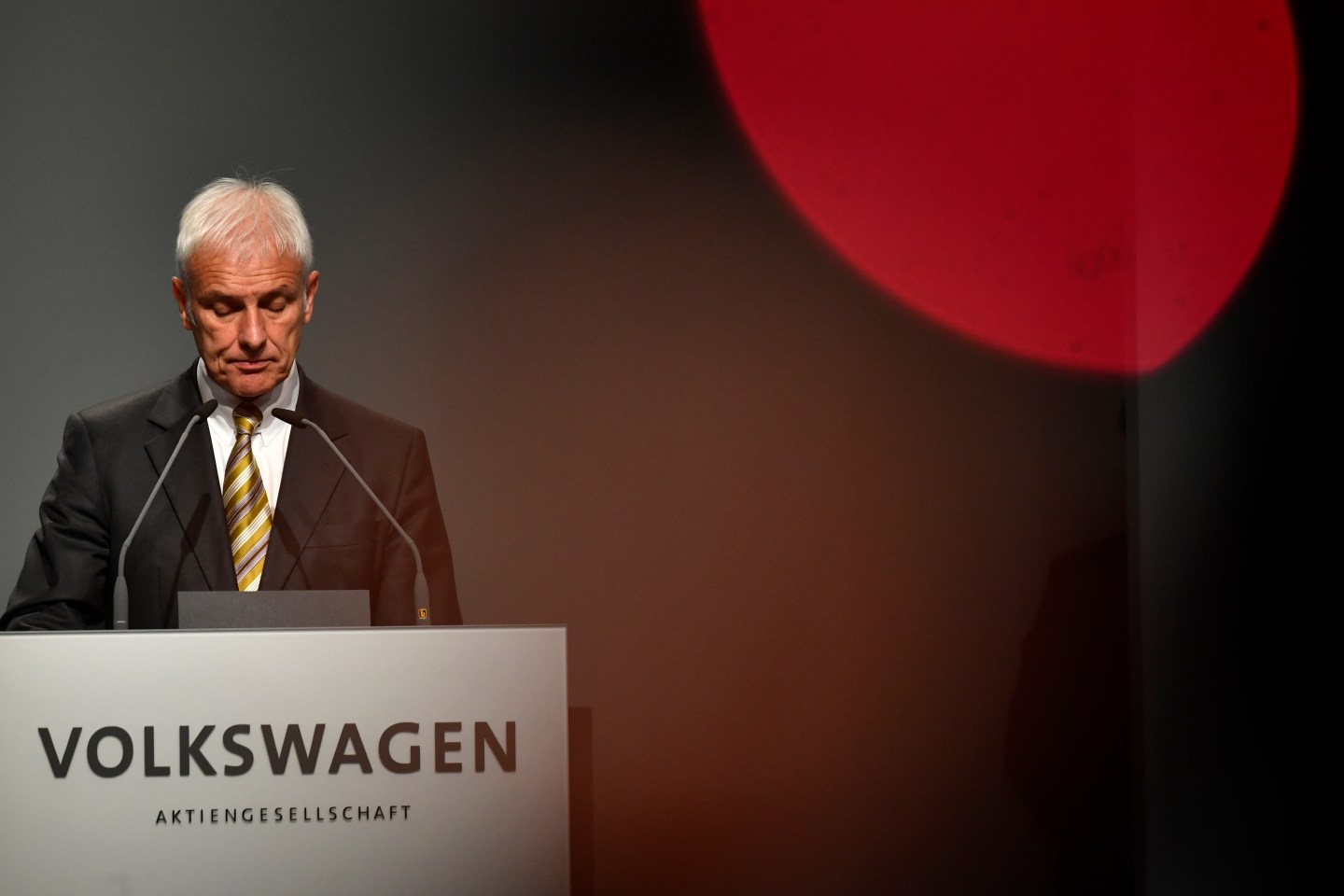 HANOVER, GERMANY - JUNE 22: Matthias Mueller, head of German automaker Volkswagen AG, speaks on stage during the annual Volkswagen general shareholders meeting on June 22, 2016 in Hanover, Germany. The meeting is taking place as Volkswagen continues to grapple with the consequences of revelations it used cheating software to manipulate the emissions of its diesel cars. Mueller himself recently expressed concern that the future of diesel cars may be doomed due to the scandal. Meanwhile German state prosecutors have launched an investigation into former VW head Martin Winterkorn over charges he withheld information about the growing scandal in order to influence financial markets. (Photo by Alexander Koerner/Getty Images)
Photo by Alexander Koerner/Getty Images

Two headlines this morning update my current favorite do-this-not-that study of leadership and culture. Here they are:

These two long-running stories are well known but the significance of the big-picture comparison is easy to overlook. Consider the contrast. The VW story is 11 months old, and under CEO Matthias Müller it’s still getting worse. The company settled with U.S. regulators and consumer plaintiffs in June for $15 billion, but that’s just the beginning. Settlement of the new criminal issues with the Justice Department will cost more, as will settlements with U.S. dealers, whose sales have fallen for nine consecutive months, and settlements with owners of 85,000 vehicles powered by engines not covered in the June settlement. The German state of Bavaria recently announced it will sue VW, and two other states may join the suit. German prosecutors last month searched offices and private homes as their investigation continues to widen. The end is nowhere in sight. VW keeps increasing its loss reserve for the mess, which stands now at $21 billion.

The GM ignition-switch story virtually evaporated within months of its coming to light two-and-a-half years ago, just as CEO Mary Barra was taking over. New developments like yesterday’s show up mostly in trade publications or as minor items in general-interest media. As often as not, they’re good news for GM; earlier this year the company won a case at trial in New York, and a plaintiff withdrew his suit. “GM has already paid more than $2 billion in civil and criminal penalties and settlements,” Automotive News reports. That cost will certainly increase, but it’s hard to imagine its ever approaching VW’s costs. Reputational damage, impossible to quantify, also appears far worse at VW.

Obviously the cases are different, but it isn’t clear that VW’s should have been the greater corporate calamity. GM’s case involves millions of cars and 124 deaths vs. 600,000 VW vehicles with emissions cheating software in the U.S. So why is VW taking the bigger hit? Much of the explanation is leadership. Both CEOs got their jobs just as the scandals were breaking. Müller responded much as GM would have done in the past – with terse, legalistic statements and denials of responsibility that later had to be retracted. Barra did the opposite, commissioning and releasing a damning independent report, acknowledging faults, and paying victims and their families almost immediately, even before lawsuits were filed. Last week, in a video deposition in another civil suit, she admitted GM’s mistakes, saying GM engineers “misdiagnosed [the problem] as a customer satisfaction issue and not a safety issue,” for example.

I’m guessing that Müller behaved as his lawyers advised him to, and Barra didn’t. Müller managed conservatively, and Barra took risks. On any given day, Müller likely had good reasons for everything he did. But I don’t think there’s any question who has emerged as the better leader.