How A Brazilian Steakhouse Is Wooing American Meat Lovers 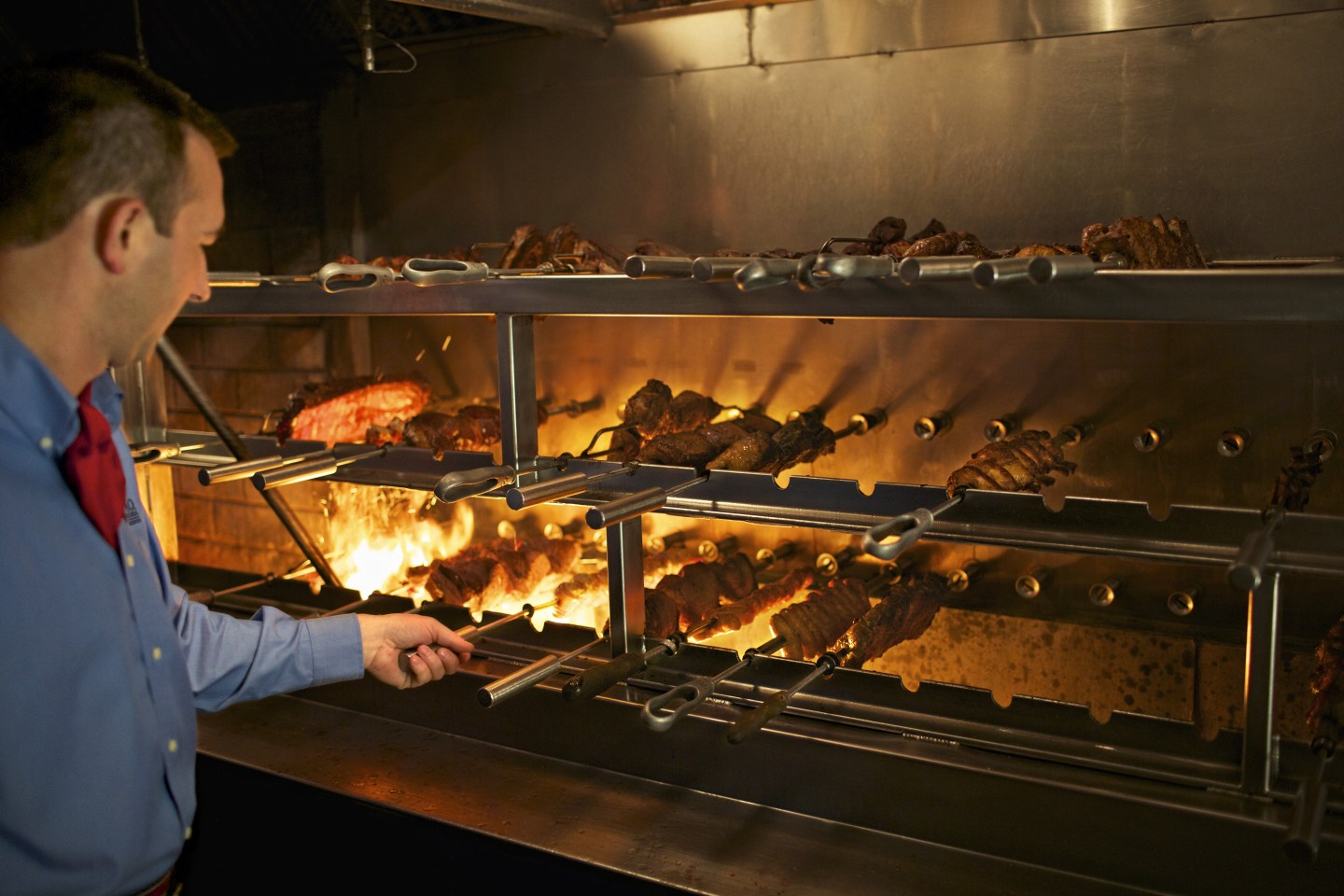 About halfway through a tasting at Brazilian steakhouse Fogo de Chão, I was wondering whether I made a mistake attending the press event. I’ve been a pretty strict pescacarian for nearly five years — avoiding meat entirely. At Fogo de Chao, specialty trained chefs serve up pork, lamb and chicken — and I had to admit: it was truly delicious.

Fogo de Chão (FOGO) went public a little over a year ago, launching an initial public offering at a time when steakhouses in the U.S. are enjoying a renaissance. With steakhouses outperforming the regular full service restaurant category, this chain also has seen a steady growth in sales, from $169 million in 2010 to $272 million last year.

The steakhouse will likely be in the news a bit the next few weeks as the public’s attention turns to Brazil, which is hosting the Olympics for the first time ever. Fogo de Chão first opened a restaurant in Brazil in 1979, but don’t expect a massive sales boost from big spenders visiting Brazil for the Olympic Games. The chain—which has 32 restaurants in the US and 10 in Brazil—operates just one restaurant in Rio de Janeiro, where the global games will be played. Fogo de Chão benefited more from the World Cup in 2014, when 32 of the 64 total matches were hosted in cities where Fogo operates. That helped boost same-restaurant sales by 11.4% in Brazil in 2014.

Still, there are some opportunities to benefit from the halo effect that the Olympic Games provides. “We are uniquely positioned,” says Fogo CEO Larry Johnson in an interview with Fortune. “We fortunately have a flagship restaurant in Rio near the Olympic Village. We are where it is happening there.”

Earlier this year, Johnson was bullish about the business in Brazil, saying same-restaurant sales had increased in the first quarter by 2.3% because in Rio there had been an increase in tourism. “There also seems to be some halo effect of the Olympics, driven by pre-planning efforts.” More will be learned about the Olympics benefit when Fogo reports second-quarter results on August 9th.

The company’s gaucho chefs butcher, prepare and cook a variety of meats and also come to all tables at the restaurant to educate diners on the meats that are being served. There’s a competitive advantage to this business model: the dual role of the chefs (who are also servers) reduces back-of-the-house labor costs.

It can be a bit overwhelming to have a steady flow of juicy meats land on your plate (especially when you only consume meat once a year for Thanksgiving). Thankfully, Fogo has a system in place to prevent carnivores from feeling too full. Each guest gets a two-sided medallion with one side red and one side green. Green means “Serve away!” while red is essentially a pause button. I mostly stayed “green” throughout my meal so I could thoroughly try the cuisine. There’s also a bar full of vegetables and other sides to balance the meal.

Fogo says the entire experience is “distinctly Brazilian.” It mostly touts the concept as based on how meals are prepared in the southern region of Brazil where families share foods locally.

“Brazilian cuisine is a little exotic but it is familiar and friendly to American and European palates,” says Johnson. “We love being part of the discussion of Brazil’s food experience.”

While I agree the flavor of the food is familiar, I’m sticking with the pescacarian diet and likely won’t return to Fogo soon. Meat lovers are free to disagree—just show up with an empty stomach.