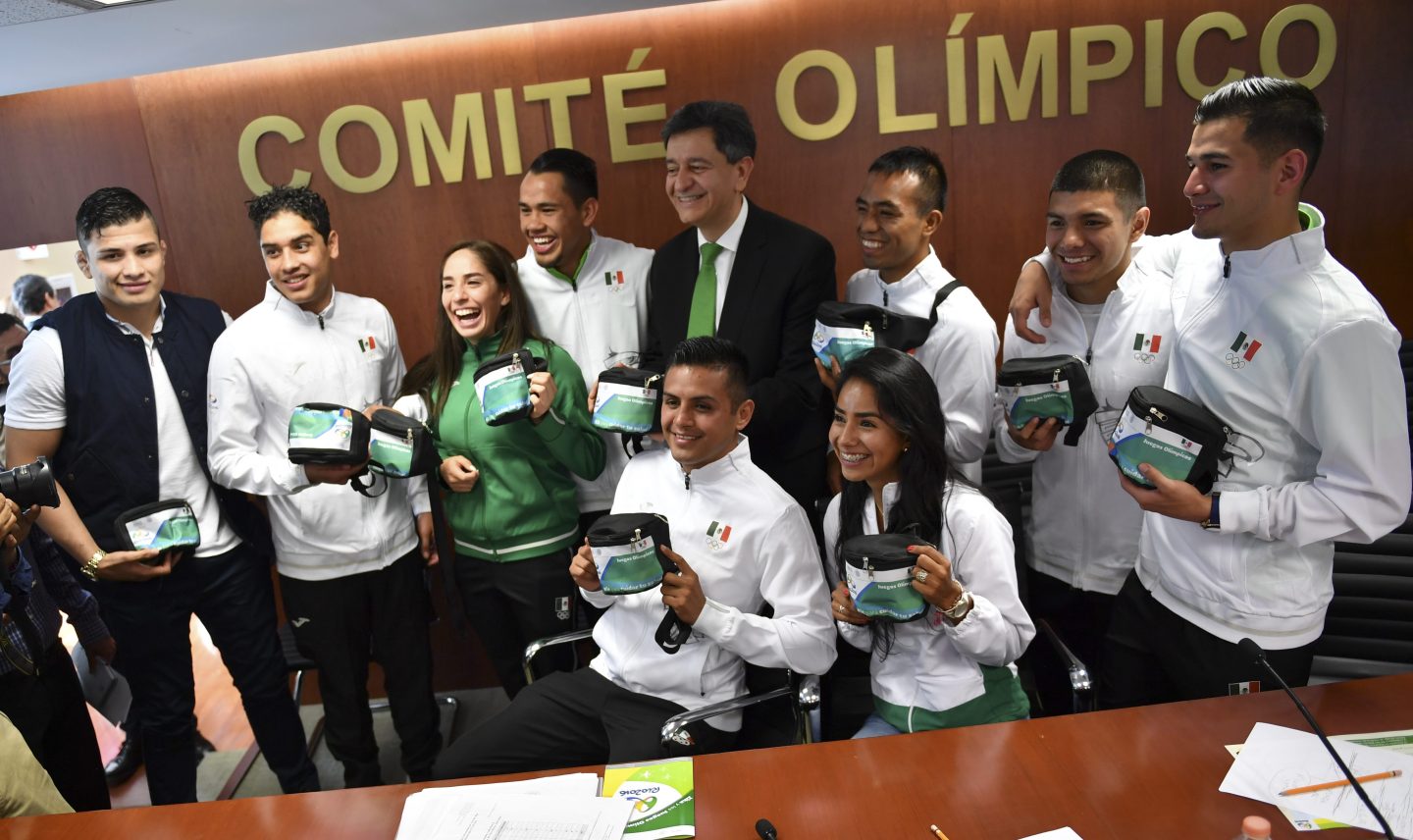 Mexican Olympic athletes pose with the Undersecretary of Promotion and Prevention of Health, Pablo Kuri Morales (C), after a press conference at the headquarters of the Mexican Olympic Committee in Mexico City on July 18, 2016. Athletes competing in the upcoming Rio 2016 Olympic Games received a kit with mosquito repellent, condoms and information on how to prevent the Zika virus. / AFP / YURI CORTEZ (Photo credit should read YURI CORTEZ/AFP/Getty Images)
Photograph by Yuri Cortez/AFP—via Getty Images

The 2016 Rio Olympics officially kick off Friday night to no shortage of controversy, from ongoing political turmoil in the host country of Brazil to concerns over the quality of the water Olympians will have to navigate.

But the threat of the Zika virus, of which there are nearly 166,000 suspected and confirmed cases in the country, according to the World Health Organization (WHO), has added an extra layer of concern to the games. The mosquito-borne pathogen can be devastating to the fetuses of pregnant women, causing microcephaly (abnormally small heads) and other neurological disorders. It can also be transmitted sexually—which is especially problematic because history has shown that Olympians have a lot of sex.

The specter of Zika has led some athletes to stay away from Rio altogether. Many of the abstaining competitors are world-class golfers, including Rory McIlroy, Jason Day, Vijay Singh, Adam Scott, and others. (This is a particularly sad development for golf fans since the sport hasn’t even been included in the Olympics since 1904.) Tennis champions like Milos Raonic and Simona Halep have also withdrawn, as has American cyclist Tejay van Garderen.

While the desire to remain safe is understandable, the WHO has said that the threat of Zika spreading wildly during the Olympics is actually quite low. For one, Zika has been in Brazil long enough that the population has begun to form immunity to it. It’s also winter in the southern hemisphere, so mosquito populations are relatively under control.

Ironically, the threat of Zika is likely far greater in the United States, where the first locally-contracted cases began popping up last week, according to Dr. Peter Hotez, Dean for the National School of Tropical Medicine at Houston’s Baylor College of Medicine. “I think pregnant women will be safer in Rio than in Miami over the next two months,” he told Fortune in an interview, adding that cases will probably ramp up rapidly over the next six to eight weeks in Florida and Gulf states.

Still, public health officials say the possibility of infection warrants preventive measures, and some Olympic athletes attending are taking some creative—some might even say extreme—steps to protect themselves.

Health experts say that anyone planning to become pregnant somewhere between the next two to six months should either stay clear of Zika-affected regions or exercise caution. That includes men. Zika can remain in men’s semen for an extended period of time, and pregnant women who become infected have between a 1 in 100 and 1 in 13 chance of their fetuses developing birth defects, according to Hotez.

Pregnant women, in particular, are warned to stay away from Zika-affected regions. The virus’ links to microcephaly and the neurological disorder Guillain–Barré syndrome have been established. But Hotez believes that even newborns who don’t develop these conditions may come to exhibit other neurological or developmental disorders.

Susie Verrill, partner of British track star Greg Rutherford, has taken one creative tack to the problem. She’s staying away from Rio while Rutherford competes but has also frozen his semen in case he becomes infected since the couple wants to have more children.

My gf @susiejverrill has written for @StandardIssueUK on why she's not travelling to Rio during The Olympics – https://t.co/oFHKSvePRt

People who have been to Zika-affected areas who want to become pregnant should also be tested by their healthcare provider.

The WHO and the Centers for Disease Control (CDC) recommend using condoms during intercourse to prevent transmission. That’s led to some opportunism from some businesses. For instance, Australia’s Olympic delegation will be provided “Zika-proof” condoms by companies Starpharma and Ansell. These prophylactics contain an anti-microbial agent the companies claim offer even more safety.

To be clear, all condoms protect against Zika. The 450,000 free condoms (100,000 female ones and 350,000 male ones) that Brazilian authorities will distribute during the games will be just as effective as the specialty ones that Australian athletes will be equipped with.

There is no current treatment for Zika and vaccines to protect against it are in the earliest stages of development. So public health officials have recommended Olympians to regularly use mosquito repellents which contain DEET, picaridin, oil of lemon eucalyptus, or IR3535. Sleeping under a mosquito net also is recommended, as are long-sleeved fabrics and sheets that have been treated with permethrin, which repels mosquitoes.

If anyone in the village forgets to pack repellent, come and see me…#DeptOfDefense #zikaproof pic.twitter.com/x8RdUV6M7c

Brazilian sports fans are not too pleased about her tweets and the fact that she originally hedged about whether she’d even attend the games. She was repeatedly booed and taunted with chants of “Zika!” on Wednesday during a match against New Zealand.