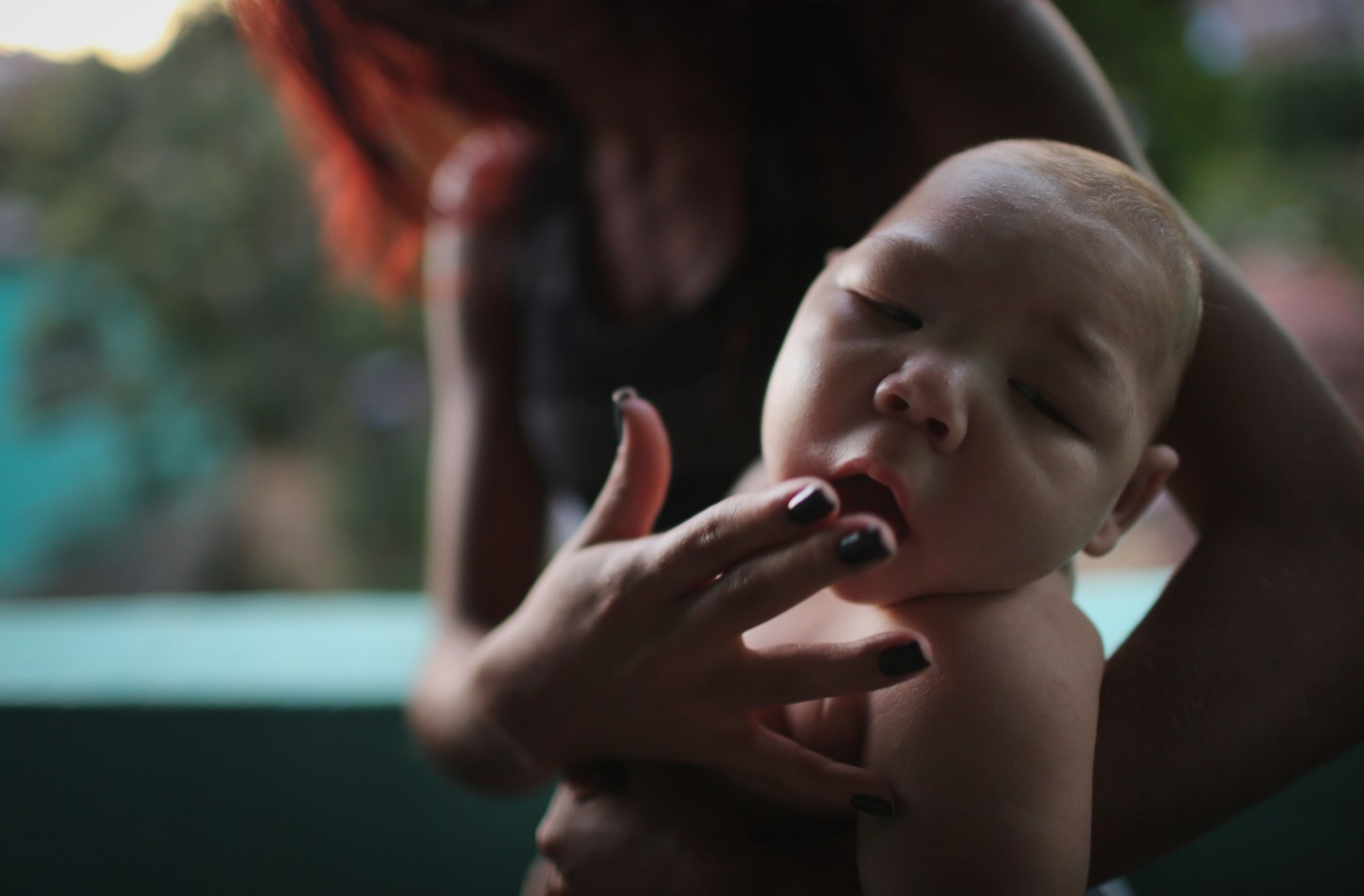 RECIFE, BRAZIL - JANUARY 25: Estafany Perreira holds her nephew David Henrique Ferreira, 5 months, who has microcephaly, on January 25, 2016 in Recife, Brazil. In the last four months, authorities have recorded close to 4,000 cases in Brazil in which the mosquito-borne Zika virus may have led to microcephaly in infants. Microcephaly results in newborns with abnormally small heads and is associated with various disorders including decreased brain development. According to the World Health Organization (WHO), the Zika virus outbreak is likely to further spread in South, Central and North America. At least twelve cases of Zika in the United States have now been confirmed by the CDC. (Photo by Mario Tama/Getty Images)
Photograph by Mario Tama—via Getty Images

The National Institutes of Health (NIH) announced Wednesday that it would be launching its first human trials of a vaccine for Zika virus, which is linked to potentially devastating developmental and neurological birth defects in pregnant women who contract it. The launch comes days after public health officials issued the first travel warning inside the U.S. over Zika contracted from local mosquitoes in Florida.

The early-stage study is expected to enroll about 80 non-infected volunteers between the ages of 18 and 35. The experimental vaccine, which was created by National Institute of Allergy and Infectious Diseases (NIAID) scientists, doesn’t involve a live or weakened version of the pathogen itself. Rather, it contains a slice of DNA that’s been modified with genes which code for proteins associated with the Zika virus. The presence of those proteins mimics the presence of the microorganism itself and elicits and immune response from the body.

The vaccine’s “results in animal testing have been very encouraging,” said NIAID director Anthony Fauci. “We are pleased that we are now able to proceed with this initial study in people.” But he also admitted that “it will take some time before a vaccine against Zika is commercially available.”

This is the second Zika vaccine candidate to be green lit for human trials in the U.S. In June, the Food and Drug Administration (FDA) cleared phase I trials of another experimental DNA vaccine from Inovio Pharmaceuticals (INO). Several other biopharma companies and groups of scientists from around the world are working on a Zika vaccine, including French drug giant Sanofi.

While the new trials represent progress, doubts remain about how effective they’ll ultimately be in curbing the ongoing scourge. CDC director Tom Frieden said Wednesday that his agency’s Miami-area travel advisory to pregnant women and couples who plan to become pregnant could last a year.

And the number of infections (and regions with travel warnings) is expected to swell in the coming weeks as more U.S. mosquito populations start transmitting the virus. Efforts to kill the relevant types of mosquitoes hasn’t been as effective as officials had hoped, Frieden said.

Federal funds for monitoring and fighting the outbreak are also running out. Congress failed to pass a $1.1 billion Zika bill before leaving for its summer recess—a decision that’s been slammed by doctors and public health officials since prevention, oversight, and eradicating Zika-carrying bugs is seen as key to minimizing infections during the ongoing peak mosquito season.

There have been more than 6,400 Zika cases reported in the U.S. and its territories. The World Health Organization has insisted the virus will be manageable during the upcoming Olympic games in Rio de Janeiro, Brazil.