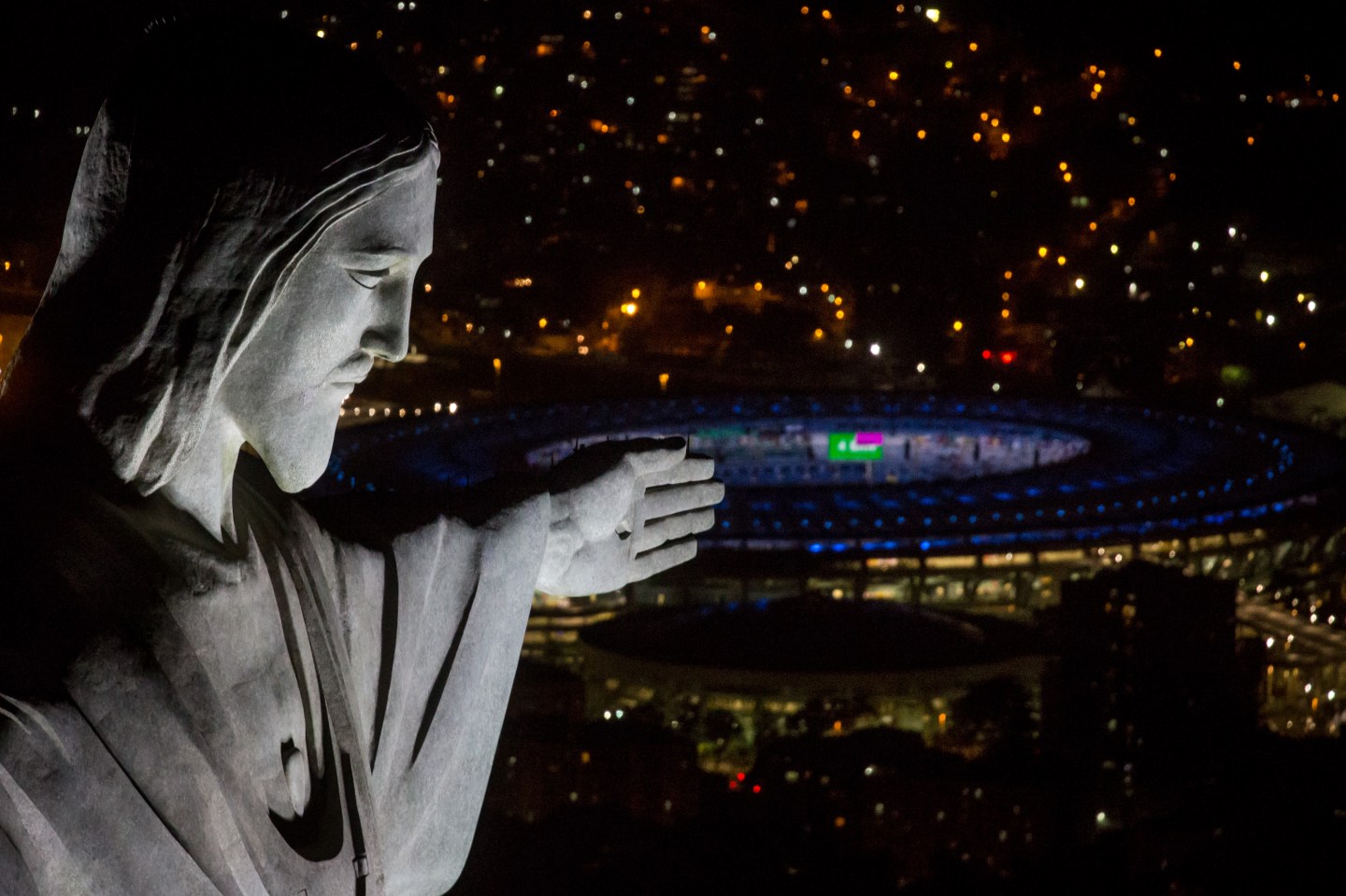 RIO DE JANEIRO, BRAZIL - JULY 31: The Christ the Redeemer statue is seen at sunset in front of the Maracana Stadium ahead of the 2016 Summer Olympic Games on July 31, 2016 in Rio de Janeiro, Brazil. (Photo by Chris McGrath/Getty Images)
Chris McGrath — Getty Images

As athletes fight for a spot on the Olympic podium, another battle is also raging along the margins.

Companies worldwide will be competing for attention at Rio over the next few days. Already, brands such as Coca-Cola (KO), Visa (V), and Samsung have been deploying ads, rolling out athlete sponsorships, and planting their logos across apparel and stadiums in Brazil.

Most companies use this association with the Olympics to make consumers more open to their brands. Other companies though, are using the Rio Olympics to launch exciting new products on the global stage.

So which stocks come out on top? It certainly helps that markets tend to be more uplifting during the period. On average, the Dow Industrial Average gains in value 69% during the two-week summer Olympic period, according to market analysis firm, Factset.

Here are some companies that have made it work in the past—and may do it again.

As an official sponsor of the Olympics, McDonald’s (MCD) has the rights to use the Olympics brand in marketing campaigns. The company has also done well through each of the past four summer games. In the duration of each of the past four summer Olympics, shares of McDonald’s have beat the MSCI Index—a collection of global stocks—by over 1.5%. McDonald’s also tends to beat the benchmark by nearly 6% one year after the games have finished.

Granted, shares of McDonald’s took a dunk earlier this year after the company reported a slowdown in same-stores sales. CEO Stephen Easterbrook also warned that the Olympics would not have a material effect on the company, though the games are likely to help McDonald’s reinforce its brand.

For a by-the-numbers look at the games, check out this piece: http://fortune.com/rio-olympics-numbers/.

A big name in the sports apparel industry, Nike’s (NKE) stock price did not do well during the past two summer Olympics. The stock slid about 2.77% during the game’s two weeks in 2012 and 2008—likely due to the disappointing earnings that preceded the events, according to a note from Wells Fargo Senior Analyst, Tom Nikic.

But there is at least reason to watch the stock through the Olympics. The sporting goods company tends to make the Olympics a “launching pad for innovation,” wrote Nikic. For example, the company launched the Flywire/Lunarlon technology in 2008, and the successful Flyknit style in 2012. Additionally, Nike’s stock has outperformed the S&P 500 during the summer games overtime between 1984 to 2004, according to data compiled by Factset’s Andrew Birstingl. Including the two most recent games, the the stock has risen an average of 6.4% during the Olympics’ two weeks. The S&P 500 has risen just 2.32% in comparison.

“Thus, while we believe the Games are a negative near-term catalyst, the success of the company’s new innovations later this year would play a key role in the company’s ability to grow the top line and fight off intense competitive pressure (from rapidly-growing peers such as Adidas and Under Armour),” he wrote.

During the year following the games, Nike’s stock rises an average of 15.27%, beating the S&P 500’s 9.3% increase during the same period, according to Birstingl.

Another potential big winner, Comcast, the parent company to NBC, spent $4.38 billion in 2011 to win the rights to stream four Olympics up until 2020. The company has agreed to stream all events live and on air—equal to roughly 24 hours of programming for 250 days straight. That includes the trials.

About 217 million Americans watched the 2012 London Olympics on NBCUniversal networks. The company has also already surpassed $1 billion in ad sales for the Olympics segments—putting the company on track to secure the most national advertising sales ever for an Olympics game, Comcast said in March.

Comcast (CMCSA) also has a solution for that deluge of entertainment: X1, a voice-controlled black box that will allow Comcast customers the ability to search for programming using keywords and watch on demand. For Comcast, X1 is a chance to keep its subscribers in the age of cord-cutting.

Shares of Comcast have risen an average of 3.7% during the two-week Olympics, beating the S&P 500’s 2.32% average in the last eight summer games. The stock also rises by an average of 30.3% in the year following the games while the S&P 500 gains 9.3%, according to Birstingl.

Comcast recently signed another deal for $7.65 billion, allowing it to exclusively broadcast and stream future Olympics games until 2032.

Credit card company Visa (V) is another official sponsor that has used its status to market extensively to consumers.

The company is also the exclusive payment provider for the games this year, meaning Visa will be managing the entire payment system for the game’s stadiums, press centers, the Olympic village, and Olympic superstores.

In terms of marketing, Visa has given its 45 sponsored athletes, including four-time Olympic gold medalist Missy Franklin, Visa payment rings, in a bid to show the company’s tech savvy. The rings allow users to pay with just a tap, and do not require a battery or recharging. It is also water resistant up to a depth of 50 meters.

Visa did however cut its 2016 revenue forecast earlier this year, blaming lower U.S. payment volume of weak gas prices and weaknesses in commodity-based economies such as Brazil.

But who knows—maybe Visa’s overwhelming presence in Rio during the Olympics will help catalyze use of Visa cards in the country.

Although not an official sponsor, Under Armour (UA) has ramped up efforts to associate itself with the games on an international scale—after all, it has a relatively weak global presence. During the company’s last earnings call, the team emphasized that Under Armor had four times as many athletes representing them as they did during the London Olympics.

The company is making the uniforms for both the U.S. women’s and men’s gymnastics teams, and has also created a custom pair of shoes for Olympic gold-medalist Michael Phelps.

The company has also rented several outdoor gyms by the beaches in Rio, where it will setup daily workouts for fans during the games, according to Reuters. The sports apparel maker will also host penthouse parties for VIP guests, where they can network with Under Armour’s sponsored athletes.

But watch out. In Rio, it will be a head-to-head between Under Armour and Nike.