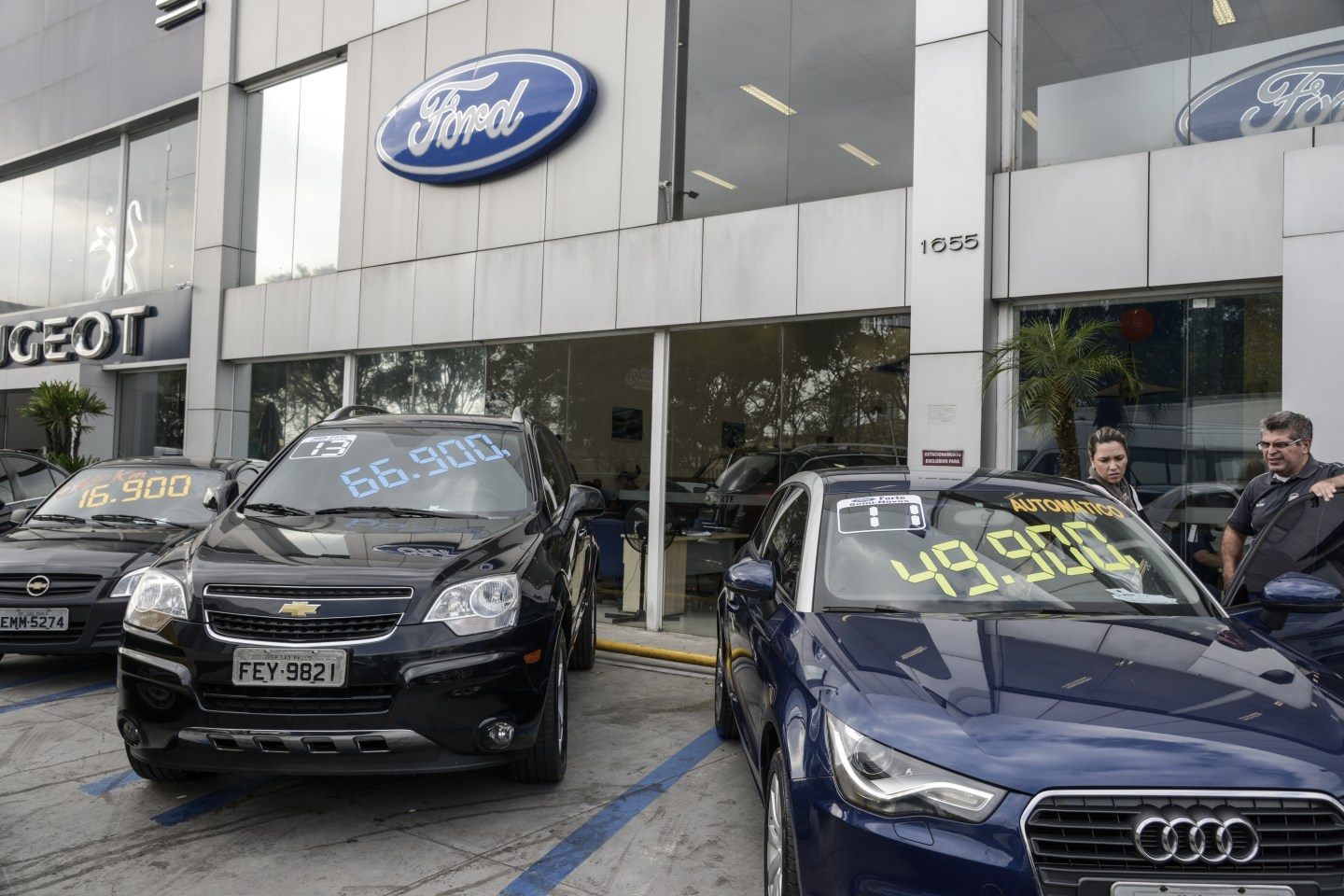 A sales representative shows potential car buyers the interior of an Audi AG used vehicle outside of a Peugeot SA and Ford Motor Co. car dealership in Sao Paulo, Brazil, on Saturday, May 14, 2016. Brazil economists forecast lower inflation and interest rates in 2017 after Michel Temer took over as Brazil's acting president following a vote by the Senate to commence an impeachment trial of Dilma Rousseff.
Photograph by Paulo Fridman — Bloomberg via Getty Images

Let the good times roll, so goes the adage. But for automakers, those good times may be reaching their peak.

On Tuesday, automotive manufacturers released their sales, and while the annual sales numbers were projected to tick higher in July to 17.3 million from 16.61 million in June, not all manufacturers reported growth. Notably, Ford (F) and General Motors (GM) both reported sales numbers that were down, -2.8% and -1.9% respectively, and their stock prices also fell after the market opened in New York. Fiat Chrysler and Nissan both reported monthly sales increases that were short of analyst expectations. while Toyota, Honda, Kia, and Volkswagen had yet to publish their sales figures as of 10:30am ET on Monday.

“It’s clear the industry is plateauing,” says Kelley Blue Book analyst Akshay Anand. “With incentives continuing to rise faster than ATPs combined with the slowing growth, the industry is in a tricky spot. Still, sales are near all-time highs, and should continue to remain strong regardless of the flattened growth for the rest of 2016.”

In 2015, U.S. the annual auto sales rate reached 17.5 million, a new record indicating strong consumer spending behavior fueled by favorable financing options and cheap gas. The past month was the best July for carmakers since 2005, according to Kelley Blue Book (auto dealers often offer attractive incentives to buyers to get them into showrooms during traditionally slower months.)

The first half of 2016 was strong for automakers, and while sales are expected to maintain their pace through the end of the year, the industry likely won’t see the same robustness as it has over the last year and a half. The six-year-old auto market increase is the longest since World War II, according to Bloomberg.

While sales are increasing, so too are car prices. The average transaction price for new vehicles is up 2.5% from last year to $34,264, largely because cars are outfitted with more expensive technology, says Karl Brauer, KBB senior analyst.

And while some worry that the increase in prices combined with easy financing could lead to a bust in the market, Dwight Johnston, chief economist for the California and Nevada Credit Union Leagues tells MarketWatch that subprime auto loans aren’t anything to worry about.

“We’d be in a bubble if you saw a sudden jump in the annual U.S. sales rate to 19 million or 20 million vehicles without a commensurate surge in the economy. There would also probably be an extraordinary increase in subprime lending.”

It’s worth noting that as it’s become easier to finance a car purchase, delinquencies have increased marginally, according to an Experian report on the state of the industry. Plus, as Edmunds.com notes, more new vehicles were leased in the first half of 2016 than during the first half of any other year in history.

The peak may be near after all.