What to Watch for in Tesla’s Second Quarter Earnings 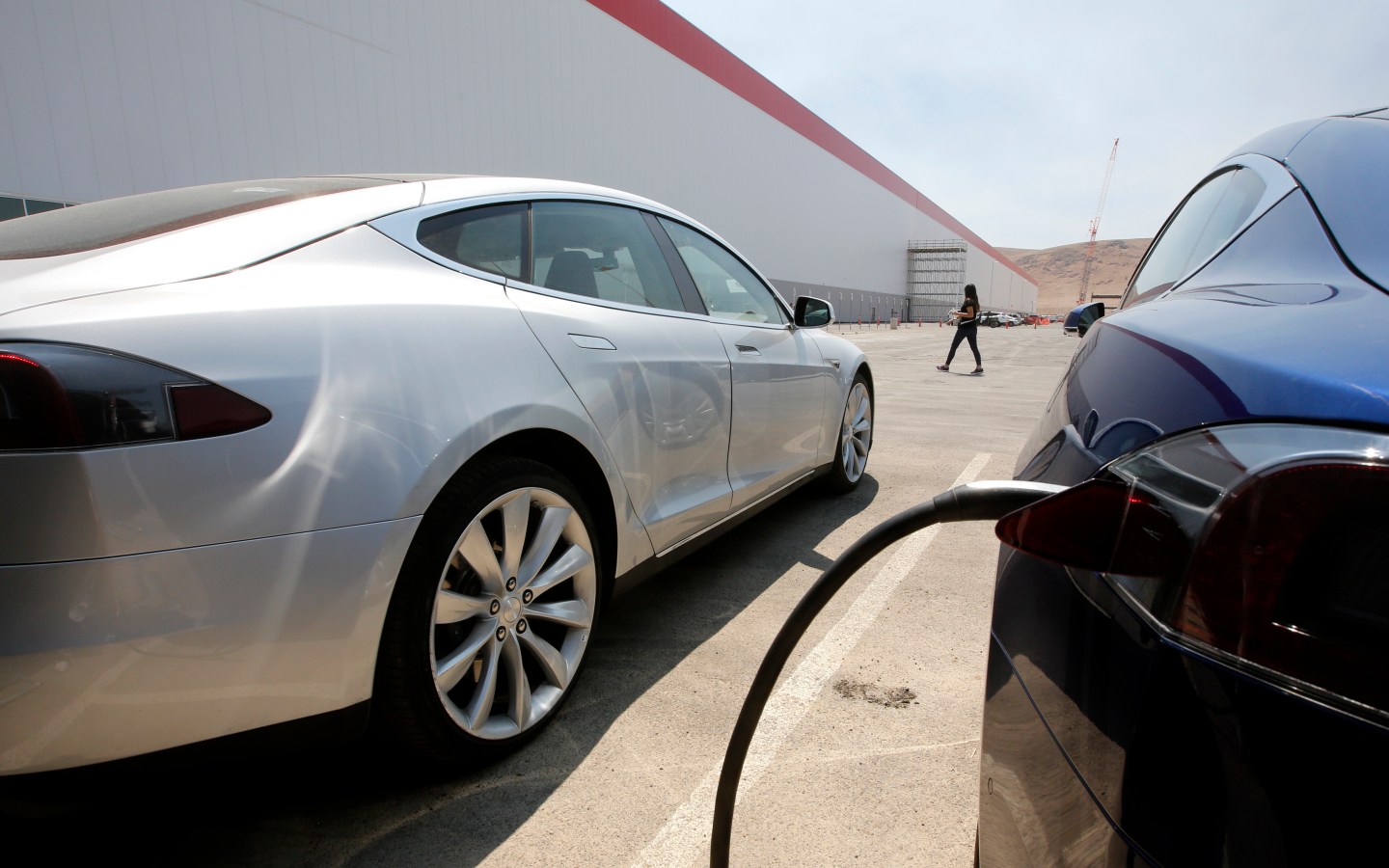 Tesla Motors model S cars are charged at the new Tesla Gigafactory, Tuesday, July 26, 2016, in Sparks, Nev. The Gigafactory is Tesla Motors’ biggest bet yet: A massive, $5 billion factory in the Nevada desert that could almost double the world’s production of lithium-ion batteries by 2018. (AP Photo/Rich Pedroncelli)
Rich Pedroncelli — AP

Last week at Tesla’s grand opening of its massive battery factory, under construction outside of Reno, Nev., Tesla’s CEO Elon Musk responded to a question about the close timing of the factory event and their upcoming earnings by saying, “We don’t position any event around earnings calls. . .The first time I thought about the earnings call was when you mentioned it.”

We’ll see if the splashy Gigafactory event has any positive effect on what could be a hard earnings report for the company this week.

There’s never a dull moment at Musk’s aggressive energy player. The second quarter was marked by the world’s first known fatality in an autonomous car, which occurred in May in a Tesla Model S with the Autopilot software engaged.

Regulators were still investigating that incident as of late July, and perhaps we’ll hear in the earnings call if there’s been any conclusion to those investigations or not.

We will most likely hear Musk’s latest stance on if Tesla (TSLA) plans to tweak its Autopilot software more to make the sensing system smarter. Musk has already indicated he’s thinking about as much.

But Musk definitely won’t talk about disabling it as he’s staunchly defended Tesla’s choice to roll out the tech even in its early form. A week ago at the Gigafactory event, he confirmed that by rolling out Autopilot, the automaker “did the right thing” and “improved people’s safety, not just in fatalities but also injuries.”

Another major topic will likely be the SolarCity (SCTY) acquisition. On Monday, Tesla announced an updated deal to buy the solar installer for $2.6 billion, helping Musk achieve his goal of making a one-stop shop for products that advance sustainable energy.

A combined SolarCity and Tesla would make and sell solar panels, batteries, and electric cars all under one roof. Musk has suggested that a conjoined company could one day be worth a trillion dollars, and deliver at least $150 million in savings within the first year of the close of the deal.

The acquisition still needs to be voted on by the companies’ independent shareholders, and needs to be weighed in on by regulators. SolarCity also has a month and a half to weigh other competitive offers. If everything goes according to Musk’s Master Plan (part deux), the deal will close by the fourth quarter of this year.

SolarCity’s weaker financials could be a drag on the already risky Tesla. The solar installer won’t release their earnings until August 9, but said on Monday that they’ve lowered their annual solar installation guidance for the year already due to weaker than expected bookings of home rooftop solar panels.

In the near term, Tesla has continued to face a slower than expected ramp up of production and delivery of its Model X car, an electric SUV with sweeping doors and over-engineered plush seats. (I rode in the back of an X at the Gigafactory event—they were nice!)

Instead of being a blip of a production struggle, the problem has seemed to last far longer than expected. In the second quarter, Tesla already said that it had shipped 14,370 cars, well under its forecast of 17,000 cars for the quarter. As a result, Tesla had to lower its annual car shipment guidance very slightly.

This is the second quarter that Tesla has missed its car shipment guidance. That’s worrisome because Tesla has declared that it’s going to be the world’s best manufacturer, aggressively producing 500,000 cars per year by 2018, just two years from now. Tesla plans to ship about 80,000 cars this year, up from 50,000 cars last year.

How Tesla is going to kick into high manufacturing gear within the next two years is locked inside the mind of Musk. He doesn’t seem too worried about it (at least publicly), and he confirmed his confidence in the aggressive manufacturing timeline at the Gigafactory event last week.

For a look inside the Gigafactory, watch:

The designs for the Model 3, Tesla’s planned $35,000 car, are already finished. Tesla has boasted it has received close to 400,000 reservations for the car. Tesla’s Gigafactory will be making low-cost batteries to supply this potentially disruptive mainstream electric car in large volumes.

Expect to hear an update on testing and milestones for the Model 3. The company expects to start shipping its first Model 3 cars by the end of next year, so it must start making more test cars soon. (There was one parked outside of the Gigafactory last week.)

Will it be the car of Musk’s decade-long dream? And will Tesla apply lessons it’s learned from making the Model X to the Model 3?

At the same time, sales of its cars and batteries for buildings and the power grid are growing. Second quarter revenue is supposed to deliver $1.6 billion, a jump from a year ago.

It will be interesting to see if sales of the grid batteries, called the Powerwall and Powerpack, are growing substantially. While these batteries are only supposed to make up a small portion of Tesla’s sales for awhile, sales of the batteries are expected to grow more rapidly than car sales.

Tesla is spending heavily to try to deliver on its increasingly aggressive goals. Will Tesla take to the public markets and raise even more money, and will Musk signal that on the call? Probably. He seems to want to prime investors in these lengthy Q&A sessions. Tesla just raised $1.7 billion in an offering in May.