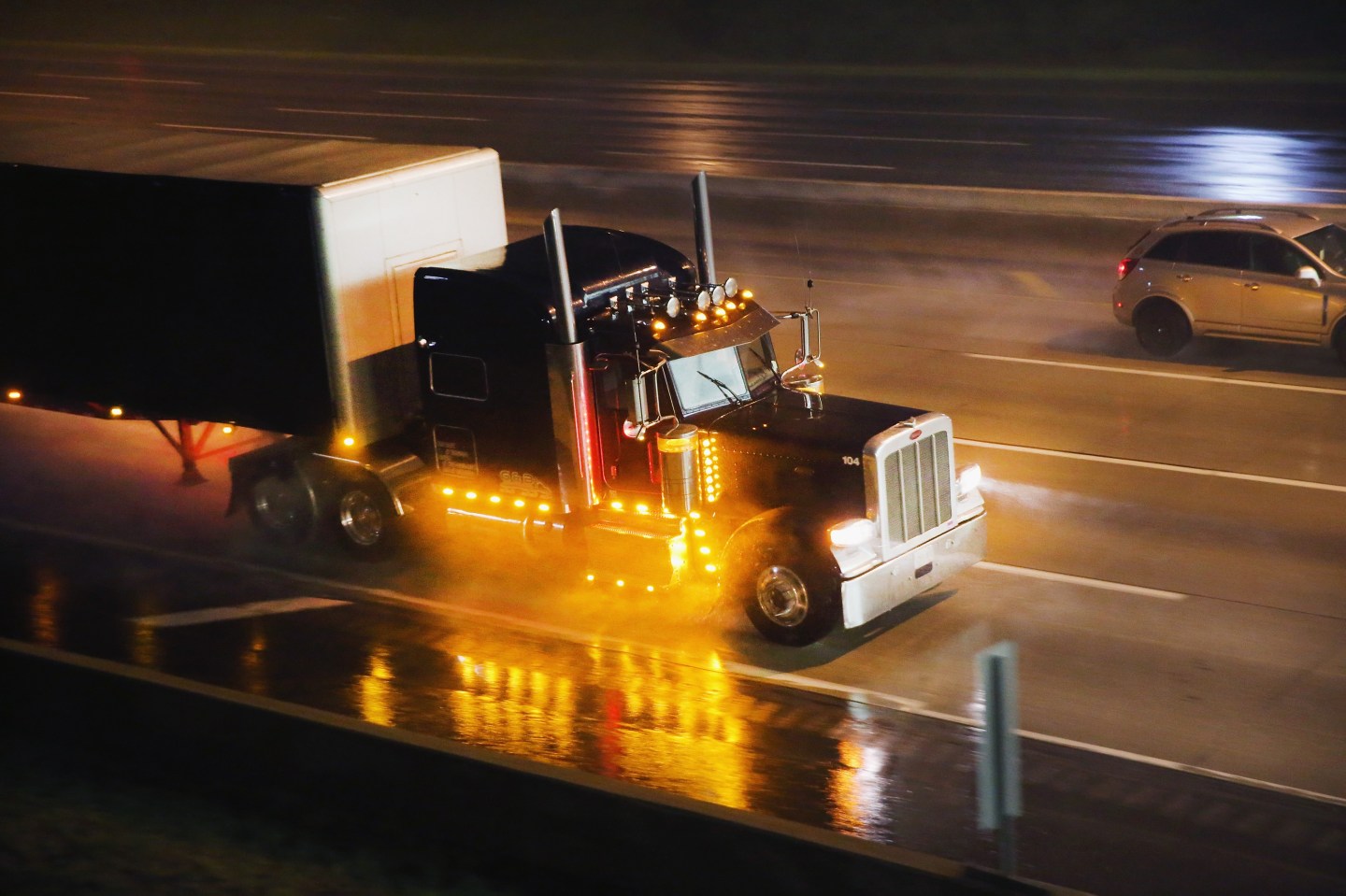 HINSDALE, IL - JUNE 10: A truck driver navigates a rain-covered highway on the outskirts of Chicago on June 10, 2014 in Hinsdale, Illinois. Legislation introduced in the U.S. Senate that would ease restrictions on the number of hours truckers can drive each week is being questioned following a crash on the New Jersey Turnpike in which an allegedly sleep-deprived truck driver crashed into a bus, seriously injuring comedian Tracy Morgan and killing Morgan's friend, fellow comedian James "Jimmy Mack" McNair. (Photo by Scott Olson/Getty Images)
Photo by Scott Olson — Getty Images

Verizon snapped up trucking tracker Fleetmatics Group for $2.4 billion in cash on Monday, the carrier’s second deal in recent weeks to bolster its small but fast growing business of connecting smart devices and sensors to cloud software over wireless networks.

Fleetmatics was one of the few public cloud-software companies to show consistent growth in revenue and profits at the same time. Its services to track trucks to improve safety and performance as well as providing scheduling and dispatching apps have been in high demand in an industry that typically moves slowly on new technology. The purchase comes just a month after Verizon bought startup Telogis, which also offers fleet-tracking cloud software and has partnerships with truck makers like General Motors, Mack, and Hino.

The latest deal came together quickly, with senior executives beginning talks only in May, leading to board approvals last week, according to a Verizon securities filing. Fleetmatics is barred from trying to solicit another offer, but the deal doesn’t appear to include a substantial termination payment if a better offer happens to come along.

Although a savvy move to strengthen its telematics and Internet of things business, Verizon’s $2.4 billion, or $60 per share, purchase doesn’t come cheap. The offer represents a 40% premium to Fleetmatic’s closing stock price on Friday (though the stock did briefly trade above $60 back in December). The price is about eight times Fleetmatics $298 million of revenue over the past 12 months through March 31 and almost 73 times its net income over that time.

But the price seemed fair to analysts, who noted growing acquisition activity in the sector. “We were not surprised by the announcement as the sector has been consolidating at an aggressive pace and Verizon (VZ) recently amped up investments in the (fleet management software) arena with the acquisition of Telogis,” Citigroup analyst Kenneth Wong wrote.

With its traditional wired telephone business shrinking and now growth slowing in wireless, too, Verizon is looking for new areas to add to its $132 billion of revenue. Along with the recent AOL and Yahoo acquisitions to build a consumer advertising business, Verizon has been looking for growth from the IoT market, where owning a massive communications network could be a major competitive advantage.

For more on Verizon, watch:

Still, the massive carrier has a way to go before its under $1 billion a year IoT unit starts to make a big impact. The Fleetmatics and Telogis additions “position the combined companies to become a leading provider of fleet and mobile workforce management solutions globally,” Andres Irlando, CEO of the Verizon Telematics unit, said in a statement. But Verizon’s stock barely budged on the Fleetmatics (FLTX) news, losing less than 1% in morning trading on Monday.

Even with revenue growing about 20% per quarter, Fleetmatics is expanding more slowly than Verizon’s existing IoT business. Verizon reported revenue increased 25% in both the first and second quarter of 2016.

Investors hoping to see significant growth overall at Verizon may have to wait for a few more acquisitions.