Can Anonymous Apps Succeed and Avoid User Harassment and Abuse? 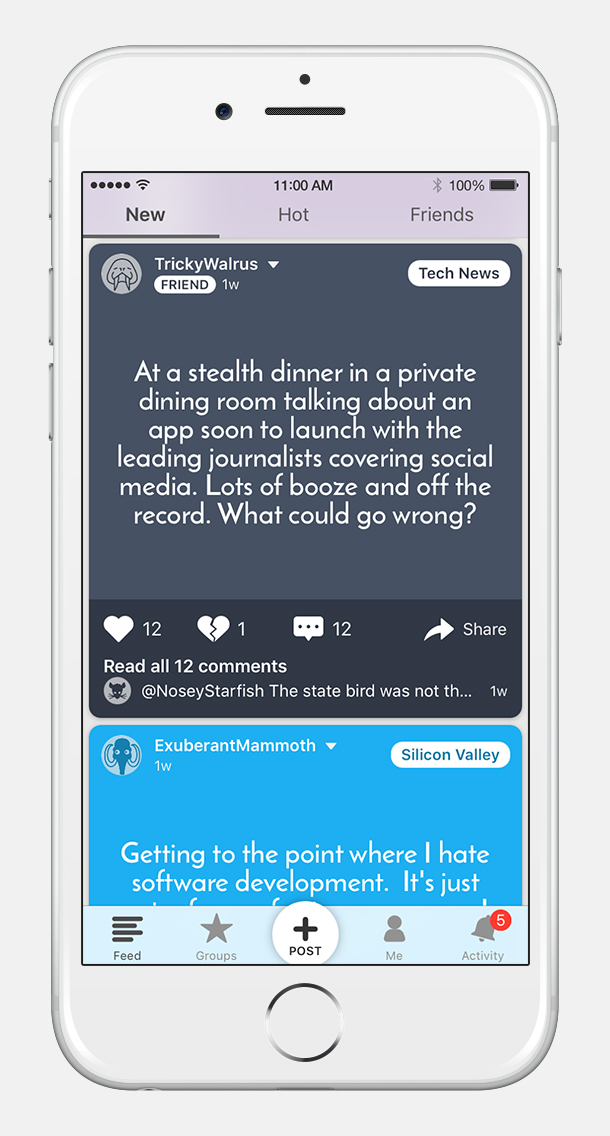 Lots of anonymous messaging apps and sites have failed, so why do entrepreneurs continue to build new ones?

That’s the question I asked in February when After School, one such app that’s specifically aimed at teens, closed $16.4 million in new funding. At the time, After School’s founders’ biggest takeaway from watching the apps that came before them, was to cautiously monitor the content posted by their users, they told Fortune. Their goal is to make it a safe space for teens to discuss difficult topics, sans vitriol.

Now this appears to be the same challenge a new anonymous app on the block (yes, another), named Candid, also thinks it can tackle. Candid, which publicly debuted on Thursday, is the brainchild of CEO Bindu Reddy and her co-founder Arvind Sundararajan. They previously founded MyLikes, a company that provides software for managing social media content, that they continue to run.

As its name suggests, Candid was born out of Reddy’s frustration with not being able to share any and all of her opinions on social media. Reddy has long been interested in social media, having helped lead various Google products like Google+, Blogger, and Google Docs.

“I have a lot of opinions about everything and I think a lot of people do too,” she told Fortune. Unfortunately, it’s increasingly hard to share these opinions openly because “everything that we say gets judged because our network is there all the time,” Reddy added.

And she’s right. Today, any public statement is grounds for scrutiny and potential criticism. Just ask either one of our presidential candidates (and their teams, friends, and associates). In turn, this eliminates the existence of a lot of conversations or even “sharing” that is important though potentially risky or controversial—like whistleblowing, for example.

Like After School and many other apps, like Yik Yak and Whisper, Candid wants to curb the harassment and abuse that will surely arise from letting people anonymously post things online. To do so, the startup says it has built machine learning algorithms that analyze posts and help filter out abusive content. And like other apps, it also has human moderators who also help with the filtering. But it’s still early, and after giving the app a whirl, it’s clear both algorithms and moderators are still learning.

Candid also hopes to differentiate itself from the pack by creating chat rooms where users will hopefully stick to the topics at hand. The idea, is to make it relevant and interesting to users. They sign up for the topics they care about, like politics, the city of San Francisco, and celebrity gossip, and then hopefully consult Candid when they’re curious about a certain topic or want to discuss it with others.

Reddy and Sundararajan aren’t the only ones who believe anonymous apps need to be useful to their users in order to endure. David Byttow, who co-founded and headed the now-defunct Secret, a once buzzy anonymous app popular in Silicon Valley, agrees. Many anonymous services can be fun and entertaining, but the novelty will quickly wear off without real utility to the user, he told Fortune.

Byttow points to apps he’s been playing with recently, like RealTalk, an app for video chatting with strangers. While well designed and fun, Byttow says it doesn’t serve a need in his life. “It doesn’t bring me closer to my friends,” he says, adding that although anonymous, an app would still need a real-life link. That’s why Secret would denote posts from a user’s own friends or social network without giving away their identity—to create a sense of real world impact.

But then there’s still issue of harassment abuse. As we’ve seen on virtually every anonymous app and website, some people inevitably pull out vicious gossip and attacks on other users. Secret certainly saw its fair share, and had to ban the use of names as an attempt to curb attacks. After nearly a year, Secret shut down because it no longer matched Byttow’s original vision, presumably a way to say that the harassment and subsequent need to police it stifled the freedom users had at the beginning.

Meanwhile, several news websites have shut down their comments sections, because of the difficulty to maintain civil discussions, and users of semi-anonymous services like Twitter and Reddit continue to complain about harassment.

But is that simply human nature when given the cloak of anonymity?

“When you’re faced with a space where you can say anything, for what ever reason, people go to the most taboo subjects,” says Byttow, who admits he has no overarching statement yet on human nature. “They go to the things they can’t say” otherwise, he adds. Secret shut down after about a year, unable to maintain its original vision for an anonymous app.

And of course, we continue to think we can curb this. “We never learn, we always have hope,” Byttow says about the proliferation of anonymous messaging apps. “All these entrepreneurs, all these founders are driven by hope.”

Instead, Byttow thinks ephemeral apps, like Snapchat, where users send photos and messages that disappear when opened, might be the happy medium. Just enough freedom from inhibitions, but not a carte blanche to unleash heartless attacks on others.