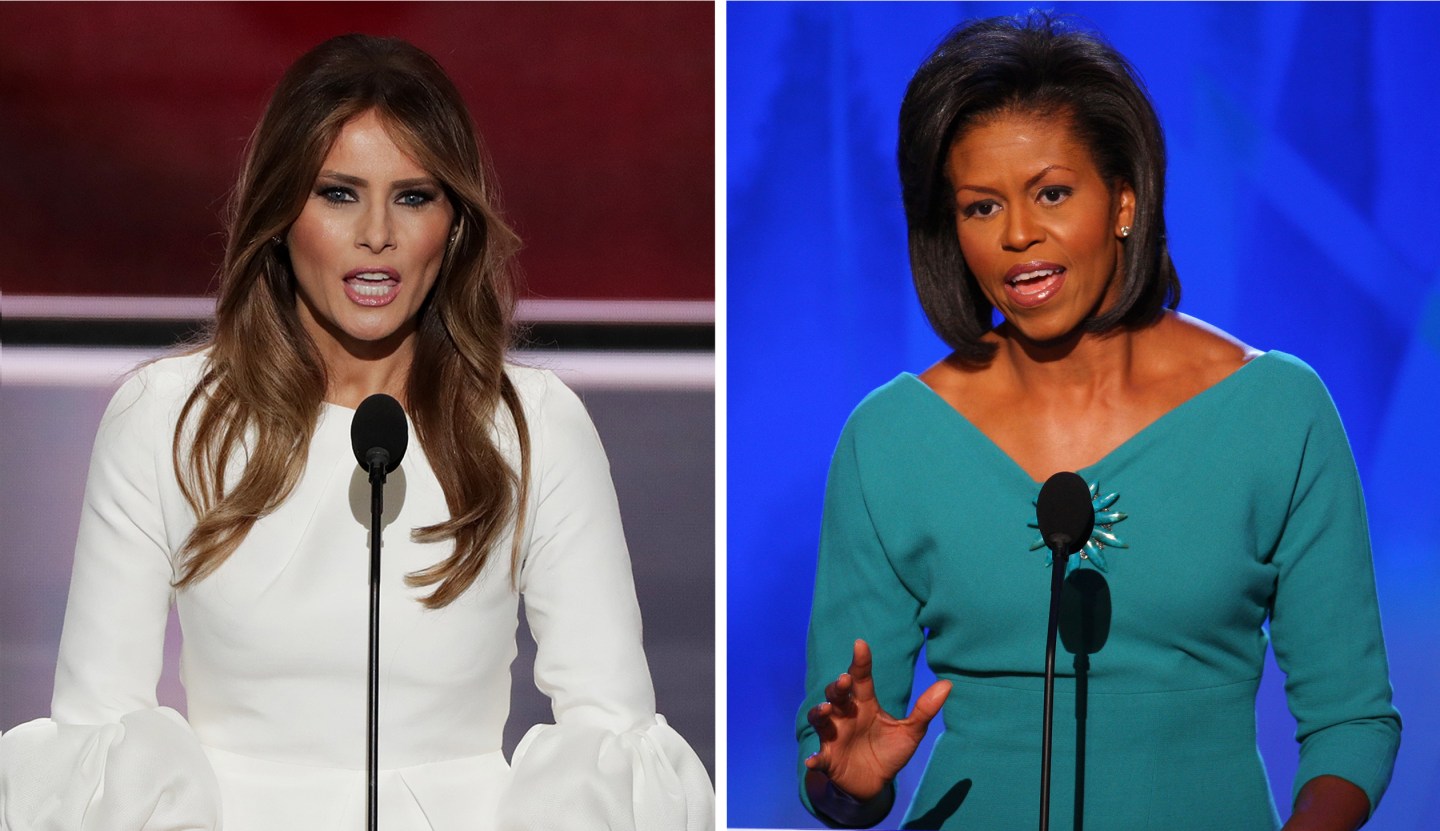 CLEVELAND, OH - JULY 18: Melania Trump, wife of Presumptive Republican presidential nominee Donald Trump, delivers a speech on the first day of the Republican National Convention on July 18, 2016 at the Quicken Loans Arena in Cleveland, Ohio. An estimated 50,000 people are expected in Cleveland, including hundreds of protesters and members of the media. The four-day Republican National Convention kicks off on July 18. (Photo by Alex Wong/Getty Images) UNITED STATES - AUGUST 25: Michelle Obama, wife of Senator Barack Obama of Illinois, Democratic presidential candidate, speaks during day one of the 2008 Democratic National Convention (DNC) in Denver, Colorado, U.S., on Monday, Aug. 25, 2008. The DNC will be held from Aug. 25-28. (Photo by Matthew Staver/Bloomberg via Getty Images)
Photographs by Getty Images

Internet trolls have moved on from Taylor Swift to Melania Trump.

At the Republican National Convention on Monday evening, Donald Trump’s wife delivered a speech that journalist Jarrett Hill pointed out was very, very similar to Michelle Obama’s address at the 2008 Democratic National Convention:

Other Twitter users quickly caught on to the overlap between the two speeches and wasted no time in creating a hashtag to shame the Slovenian supermodel—or perhaps her speechwriters: #FamousMelaniaTrumpQuotes.

Jesse Williams, best-known for his role in Grey’s Anatomy and for his recent powerful speech about race at the BET Awards, was one of the most prolific tweeters, with a series of messages quoting black artists and (jokingly) attributing them to Mrs. Trump.

"I got hot sauce in my bag. Swag." #FamousMelaniaTrumpQuotes

"I rock rough and stuff w/ my afro puffs." #FamousMelaniaTrumpQuotes

"It's a new dawn, it's a new day…and I'm feeling good." #FamousMelaniaTrumpQuotes

Other Twitter users added illustrations to help get their points across:

The Internet keeps winning lol no one is safe ever #FamousMelaniaTrumpQuotes pic.twitter.com/UmcKE1agoa

What’s The Donald’s response to all of this? A tweet that ignores the controversy entirely:

It was truly an honor to introduce my wife, Melania. Her speech and demeanor were absolutely incredible. Very proud! #GOPConvention

According to the New York Times, Melania Trump had said in an NBC interview taped before the speech that she went over her address just once in advance and “wrote it with as little help as possible.” A campaign spokesperson later alluded to the fact that the speech was written by other people (whom he did not identify), though he noted that it “included fragments that reflected her own thinking.”

As the comedian W. Kamau Bell first pointed out, whoever wrote the speech Melania delivered last night is probably experiencing something like this today: