Nissan ProPilot Lets Its Minivans Take Over Some of the Driving 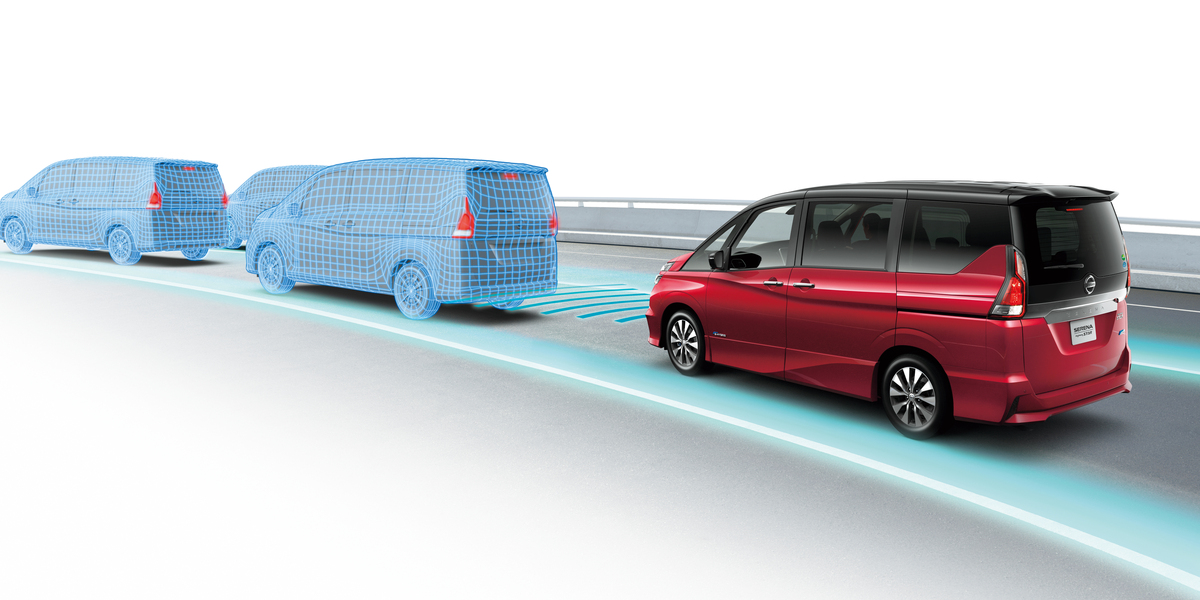 Nissan’s new Serena minivan will come equipped with semi-autonomous driving technology when it hits the Japanese market next month, as the automaker pushes to introduce cars by 2020 that are capable of navigating city streets without drivers having to be in control.

The technology, called ProPilot, is designed for highway use in single-lane traffic, according to Nissan. ProPilot takes over the steering, acceleration, and braking for drivers in highway traffic. The system, which follows the vehicle in front of it and is able to track lane markers on highways, is somewhat similar to Tesla’s more advanced hands-free driving tech called Autopilot, which rolled out in October.

Like Autopilot, Nissan Serena drivers must manually switch on the semi-autonomous driving system. And in general, both systems use sensors to capture data that helps the software see the world around it and make decisions based on that information. Both Tesla and Nissan’s systems also use vision chip technology tech from Mobileye.

In the Nissan, information is captured by one camera that is equipped with advanced image processing software and used to determine when the brakes are applied, how it stays within the lanes, and when to accelerate. The system automatically controls the distance between the Serena and any vehicle ahead using a speed preset by the driver.

Tesla’s system, which uses radar, ultrasonics, GPS navigation, and cameras, has more functionality. For instance, it allows drivers to set the distance between their car and the one ahead. The driver can also preset a speed, like Nissan ProPilot. The system adjusts the speed that depending on the what the car in front of it does. Tesla’s Autopilot service is also constantly learning, thanks to machine learning algorithms, detailed mapping and sensor data, and the car’s wireless connection. Tesla shares the information it gleans among all Autopilot-enabled cars.

The big difference is that Nissan’s system requires more interaction by the driver. When the ProPilot system automatically applies the brakes, it brings the vehicle to a full stop. At that point, the vehicle will remain in place even if the driver’s foot is off the brake pedal. When ready to resume driving, the driver activates the system by touching the switch again or by lightly pressing the accelerator. The system also requires the driver to keep a hand on the wheel, unlike Tesla Autopilot. Nissan’s system will actually deactivate if the drivers remove their hands for more than a few seconds.

Nissan says it’s “carrying out intensive studies” of driving conditions in various regions so that system will be well-suited to the conditions in the markets in which it will be launched.

Other automakers like Daimler and Volvo are developing and starting to introduce various degrees of autonomous driving technology in new cars, as they work towards fully autonomous vehicles. The U.S. Department of Transportation’s National Highway Traffic Safety Administration defines vehicle automation as having five levels. At the lowest level, known as level 0, the driver is completely in control, and by level 4, the fully autonomous vehicle takes over all safety-critical functions and monitors roadway conditions for an entire trip.

Tesla has been the most aggressive in its rollout of autonomous technology, which has garnered it praise and harsh criticism. Tesla CEO Elon Musk recently said the company would not disable Autopilot following a fatal crash of a Model S sedan that was reportedly using the technology. Musk plans to focus on better educating drivers about the semi-autonomous driving system.

His comments follow a formal request by the NHTSA asking Tesla to answer questions about its Autopilot feature. The federal agency has opened an investigation into Autopilot to determine what role the advanced driver assistance technology may have played in the May 7 crash that killed Joshua Brown. If autopilot is to blame, then Brown would be the first known fatality connected to semi-autonomous system.

Nissan might be approaching self-driving cars more cautiously than Tesla, or tech companies like Google. But it’s still a goal of Nissan and its CEO, Carlos Ghosn.

Nissan plans to introduce its ProPilot driving system in other vehicles, including the Qashqai in Europe in 2017. It also plans to roll it out to the U.S. and China markets as well as more advanced versions of the system, including a multi-driving function that enables automatic lane changes on highways. The multi-driving feature is planned for 2018, and autonomous driving on urban roads and in intersections is planned for launch in 2020, Nissan says.