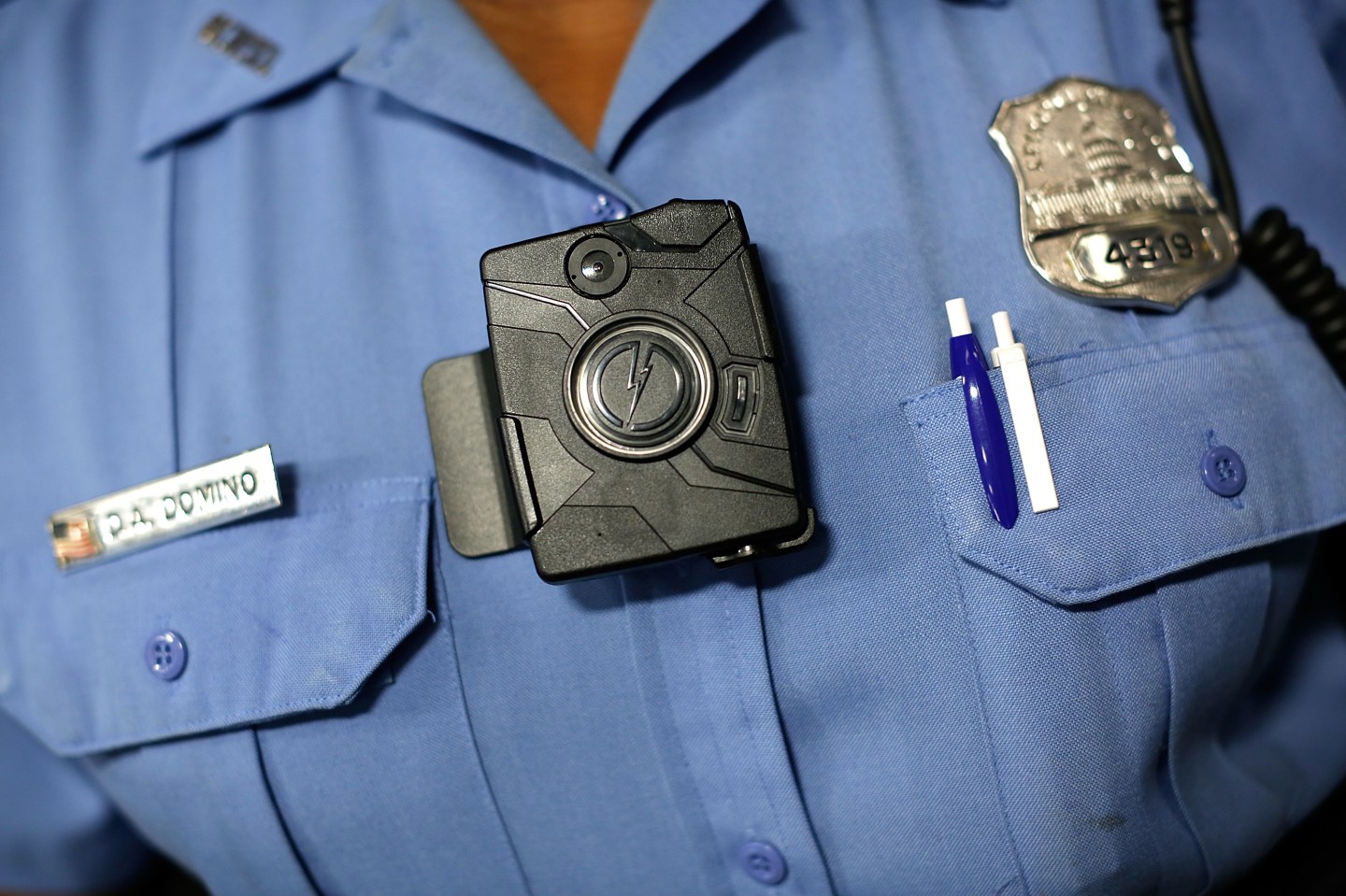 WASHINGTON, DC - SEPTEMBER 24: Washington DC Metropolitan Police Officer Debra Domino wears one of the new "body-worn cameras" that the city's officers will begin using during a press conference announcing the details of the program September 24, 2014 in Washington, DC. The MPD's use of the cameras is intended to accurately document events, actions, conditions, and statements made during citizen encounters, traffic stops, arrests, and other incidents with the city's police officers. (Photo by Win McNamee/Getty Images)
Win McNamee/Getty Images

The nationwide uproar over police-involved shootings in Louisiana, Minnesota, and Texas this week is fueling sales for companies like Axon, the country’s leading provider of body-worn cameras, used primarily by law enforcement.

Axon spokesman Steve Tuttle tells Fortune that he spent most of Friday fielding media calls, less than 24 hours after at least five police officers were shot dead by a disgruntled sniper. The shooter later told police that his killing spree was motivated by the digitally-recorded deaths of two black men, killed by white officers, earlier in the week.

“This is such a nationwide news, attention-grabbing situation that just tears at your heartstrings,” Tuttle says. “You’re just seeing this enormous change in the way we view police. We need tools to address this. If it hasn’t sunk in yet, it will now.”

In the two years since, Taser’s corporate earnings have grown from $36.2 million in the first quarter of 2014 to $55.5 million in the first quarter of 2016. (In the last year alone, sales in Taser’s Axon segment jumped 50% from $6.4 million to $9.7 million.) The company is far and away the dominant player in both the non-lethal weapon business and the police body camera category, according to various analyst estimates. As of this week, at least 3,500 police agencies and departments from 33 major cities across the nation use Axon body cams, including Los Angeles, Washington D.C., and New York, which began piloting a body cam program last month.

It was an Axon body cam that recorded the fatal shooting of Samuel DuBose by former University of Cincinnati officer Ray Tensing in July 2015. Tensing told his superiors he shot DuBose in self-defense after the local man tried to run him over during a traffic stop; the officer’s body cam video disproved his claim. (Tensing was fired from his job after the video was released. A grand jury indicted him on murder charges; his trial begins in October.)

“There’s an obvious increase in demand,” Cusick says. “There’s an expectation now that everybody should have one.”

Critics argue that video evidence from police body cameras rarely results in additional accountability for the wearer, and only serves to further erode the privacy rights of regular citizens.

Police Foundation president Jim Bueermann told the Wall Street Journal this week that most industry experts believe the technology is too rudimentary to make a difference—akin to 1980s-era phones, he said, and largely useless in certain circumstances, such as a physical struggle. The Police Foundation is a national, nonpartisan, nonprofit organization dedicated to supporting innovation and improvement in policing.

Some law enforcement watchdogs are in agreement. Mike Bento, an activist for the pro-Black Lives Matter organization NYC Shut It Down, argues that body cameras worn by law enforcement can never replace the need for civilian surveillance of police officers.

For example, the Baton Rouge officers who shot Alton Sterling on Tuesday morning were wearing body cameras that failed to record the incident, he says. “That video was captured by a cop watcher, not a body camera,” Bento says. “Body cameras run the risk of becoming another tool of state surveillance. I’d be very skeptical of introducing body cameras to police for any reason. We don’t wish to give the police more power.”

Tuttle, the Axon spokesman, says the company’s cameras were not worn by Baton Rouge officers. Still, video evidence collected by police body cams are typically owned by the individual police departments that use them, he says. Therefore dissemination of that footage is subject to the department’s policies and local law.

Moreover, though Axon cameras are always on and recording, their footage is only saved when officers press a button on the device to initiate recording, such as when the officer begins a traffic stop or arrives at a crime scene, Tuttle says. (The data are saved to a removable flash drive to later be uploaded to department servers and an encrypted Axon cloud server accessible only by the department. More than 3 petabytes of data have been uploaded to Axon’s cloud environment to date.)

In short, police body cams are no panacea. But Tuttle argues that the devices help more than hurt. He dismisses those who say that police body cams fail to make a difference, pointing to a 2013 case study that found a large reduction in the number of complaints about police misconduct after the deployment of the devices.

“It’s an absurd premise,” Tuttle says. “Body worn cameras put police officers in a greater position to do their jobs better, to get the best available evidence, and to take the guesswork out of what occurred in those events.”