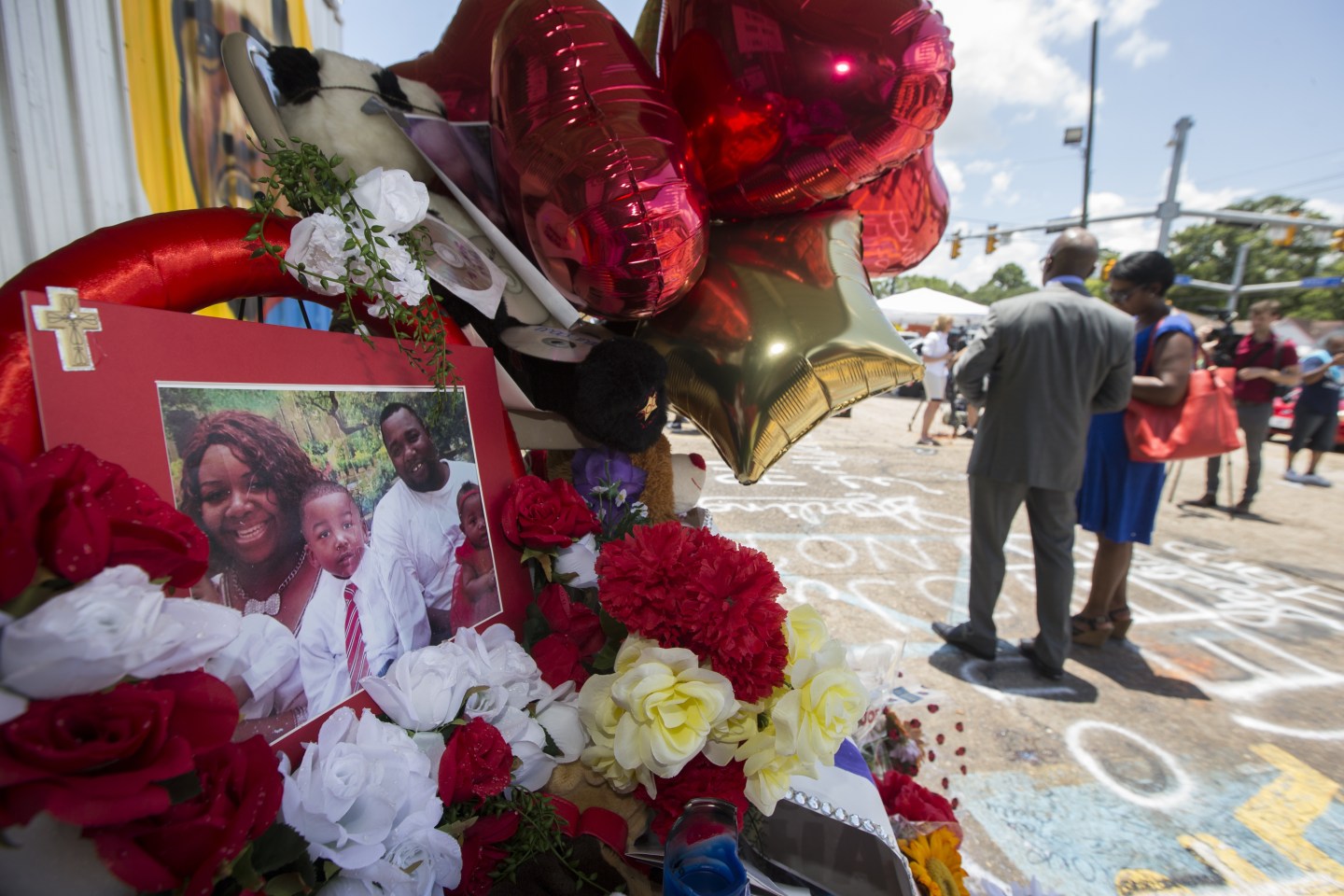 BATON ROUGE, LA - JULY 07: A photo of Alton Sterling and his family is displayed at a memorial outside the Triple S Mart on July 7, 2016 in Baton Rouge, Louisiana. Sterling was shot by a police officer in front of the Triple S Food Mart in Baton Rouge on July 5th, leading the Department of Justice to open a civil rights investigation. (Photo by Mark Wallheiser/Getty Images)
Photo by Mark Wallheiser—Getty Images

Both shootings were caught on video—the first by the security cameras outside the Triple S Food Mart where Sterling had been selling CDs; the second was broadcast on Facebook Live by Castile’s girlfriend, who had been in the car at the time along with her four-year-old daughter.

These two shootings have sparked intense reactions from people decrying this senseless violence, a narrative that keeps returning. According to the Guardian, 561 people have been killed by police just halfway into 2016. Of course not all of those incidents are unjustified. However it’s frustrating to see that African Americans and Native Americans are being killed at significantly higher rates than any other group, especially when the police officers responsible for those deaths—those of Tamir Rice, Michael Brown, Freddie Gray, and Eric Garner to name a few—rarely face criminal charges.

Here are a few reactions to the recent deaths of Alton Sterling and Philando Castile.

President Obama addressed the recent tragedies in a Facebook post: “All Americans should be deeply troubled by the fatal shootings of Alton Sterling in Baton Rouge, Louisiana and Philando Castile in Falcon Heights, Minnesota. We’ve seen such tragedies far too many times,” he stated. “What’s clear is that these fatal shootings are not isolated incidents. They are symptomatic of the broader challenges within our criminal justice system, the racial disparities that appear across the system year after year, and the resulting lack of trust that exists between law enforcement and too many of the communities they serve.”

The singer, who had been criticized for her overt Black Lives Matter message during her Super Bowl performance, released a statement on her website: “We are sick and tired of the killings of young men and women in our communities. It is up to us to take a stand and demand that they ‘stop killing us.’ We don’t need sympathy. We need everyone to respect our lives…. Fear is not an excuse. Hate will not win.” She encouraged anyone reading the statement to contact lawmakers to “demand social and judicial changes.”

The Democratic presidential candidate released a statement after the Department of Justice announced that it would be opening a civil rights investigation into the death of Alton Sterling: “Too many African American families mourn the loss of a loved one from a police-involved incident. Something is profoundly wrong when so many Americans have reason to believe that our country doesn’t consider them as precious as others because of the color of their skin.”

The rapper released a statement on Instagram expressing his fear about this cycle of violence, adding the following: “No one begins their life as a hashtag. Yet the trend of being reduced to one continues.”

Vermont senator Bernie Sanders is fairly familiar with the fight for civil rights, considering he was arrested in the 1960s for protesting in a demonstration. About 50 years later, he reacted to these two most recent events on Twitter:

The struggle for our rights is not the struggle of a day, or a year. It is a struggle that must be fought by every generation.

Your constitutional rights don’t depend on your race, gender, religion, sexuality or income. I can’t believe we still need to say that.

Nicki Minaj summed up her frustration with Alton Sterling’s case by posting the name of 14 other victims of police shootings, followed by the phrase “no conviction.” She captioned the photo, “Will there be a conviction now? Probably not.”

Will there be a conviction now? Probably not. #RIPAltonSterling hug the ppl u love a little tighter…. tell them you love them a little more often. ❤️

The New York Daily News published a shocking front page on Thursday, which it leaked on Twitter the day before. It shows a gory picture of Alton Sterling laying on the ground and bleeding from his chest as a cop points a gun in his direction: “His hands were empty. Cops killed Alton Sterling despite his being pinned to the ground and never pulling a gun.”

The Massachusetts senator addressed the issue of police brutality in a Facebook post, evoking the irony inherent in the fact that Alton Sterling, Philando Castile, and countless others have died by the hands of those who have sworn to protect and serve. She wrote: “I know that most police officers are good people who sign up to protect their communities. And I know I’ll never personally experience or fully understand the fear and pain that black Americans feel every day. But I also know that we can no longer ignore this ugly reality. An ugly reality where too many parents must teach their children how ‘to try to survive’ an encounter with the police. An ugly reality where those same parents fear that even those lessons won’t be enough.”