What the Soda Tax Means for Consumers 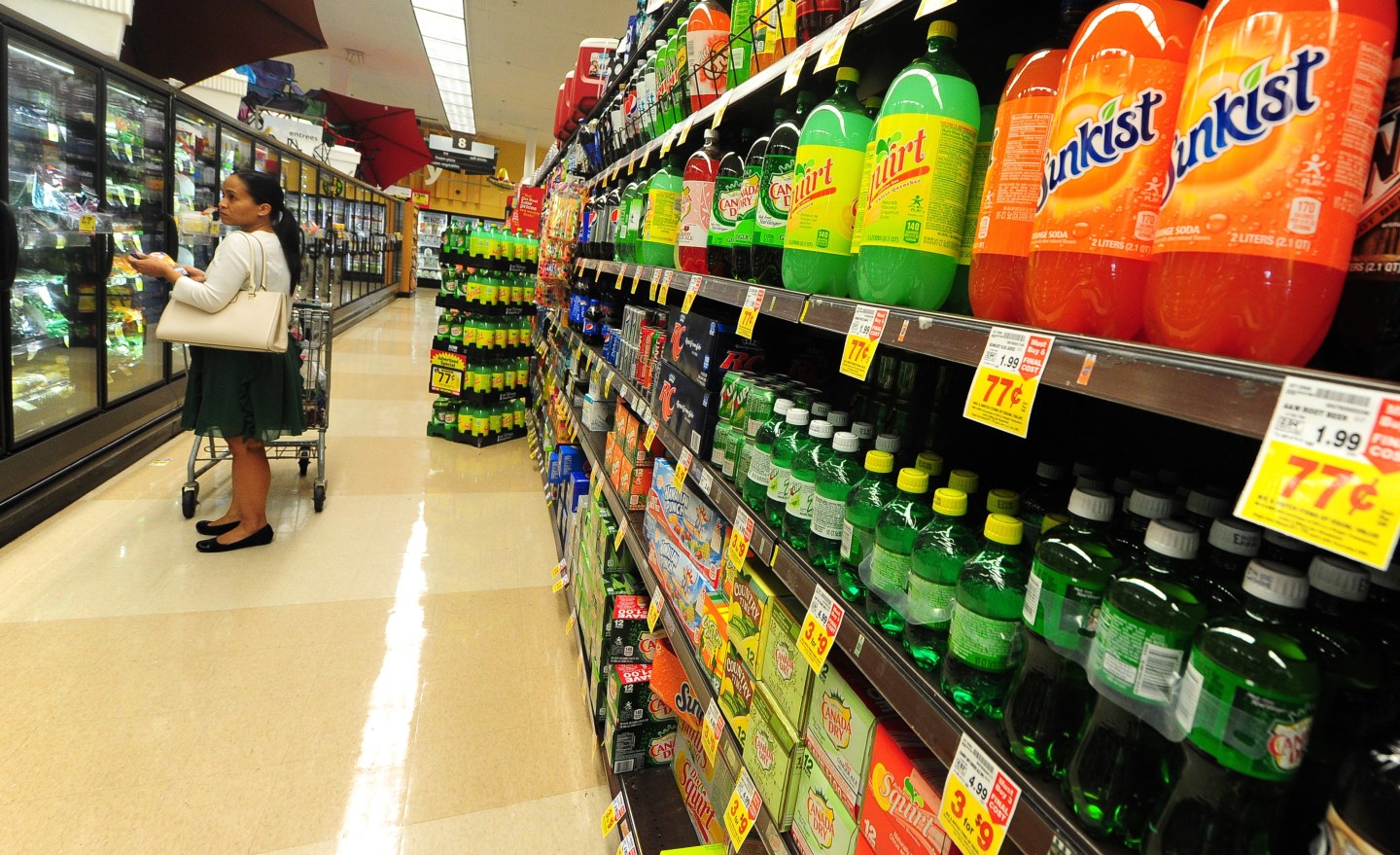 A woman shops for frozen foods on an aisle across from sodas and other sugary drinks for sale at a superrmarket in Monterey Park, California on June 18, 2014, a day after a bill in California that would require soft drinks to have health warning labels failed to clear a key committee. Under the measure, sugary drinks sold in the most populous US state would have had to carry a label with a warning that sugar contributes to obesity, diabetes and tooth decay and the legislation, which would have been the first of its kind in the United States, passed the state Senate in May, but on it failed to win enough votes in the health commission of the California State Assembly on June 17, the Los Angeles Times reported. AFP PHOTO/Frederic J. BROWN (Photo credit should read FREDERIC J. BROWN/AFP/Getty Images)
Photograph by Frederic J. Brown — AFP via Getty Images

Brian Galle is a professor of law at the Georgetown University Law Center.

New sales taxes on sugary drinks are stirring up controversy. Berkeley and Philadelphia recently adopted some version of the so-called “soda tax” (which also applies to some, but not all, other sweetened beverages). Soda taxes, and their kindred “sin taxes,” such as cigarette and gasoline taxes, are a little different than other sales taxes. They are taxes with a purpose, but the jury is still out on whether or not the soda tax can actually change consumer behavior.

Taxing with a purpose can make all the difference in how we think about whether a given tax makes for good policy. As critics point out, the soda tax, like most other sales taxes, looks regressive. Poor households spend a larger share of their income on consumption than those who are wealthier, and poorer households also consume more soda per capita. So the soda tax consumes a larger share of low-income households’ budgets.

If all the soda tax did was raise revenue, this would be a persuasive critique. In general, because every dollar counts more for those who have the least of them, tax systems should impose higher rates on higher-income families.

But sin taxes can also help people avoid self-destructive behaviors. For instance, a 2014 review of the smoking literature in The New England Journal of Medicine reported that “tobacco taxes and consumption are strongly inversely related.” Further, the review found, “[h]igher taxes are particularly effective in poorer…groups.”

In this sense, sin taxes are no more regressive than a bill from your doctor. While they may be costly, they may also provide important benefits to the community that would pay them. The fact that sin taxes impose a heavier burden on poor households means that, in effect, these households are getting an even bigger benefit—a stronger incentive to quit.

Whether or not soda taxes will have these same benefits is still uncertain. While some studies do find reduced sugary beverage consumption when prices rise, these studies have not been able convincingly to measure whether consumers are changing their behavior in other, potentially off-setting, ways. For instance, if a tax only applies to some soda, or only applies within city limits, drinkers might just substitute to less-taxed alternatives. Making the tax as broad as possible is important to limit substitution.

Even if soda and tobacco taxes are preventing, say, diabetes and lung cancer, some might object that it is intrusive and paternalistic for government to make that decision for the public. Yet the evidence is that most people welcome this kind of assistance. We all face temptation, and we all give in sometimes, yet we also pay good money for tools and tricks to overcome our momentary or addictive impulses. Studies find that those who say that they don’t need help quitting also seem to selectively ignore evidence that shows smoking is harmful, and that this tendency gets stronger as external quitting incentives get more prominent.

On the other hand, taxes are not necessarily the best or most progressive way to help us protect ourselves. For example, instead of penalties for bad behavior, regulators could explore the use of rewards to encourage good behavior. That is, we could subsidize healthy choices rather than taxing unhealthy menus.

I’ve argued that rewards have a lot to recommend them in this context. For one thing, if the unhealthy behavior is correlated with low income, the reward is an especially progressive and efficient policy. It’s progressive, of course, because it tends to transfer money to the poor. And it’s efficient because, unlike most taxes, it doesn’t discourage the earning of income—the value of the program is based on what you eat, not what you earn. Some studies also find that when households have more income, they tend to eat less junk food, making rewards more effective than penalties of similar size.

In other situations, scholars of regulation disfavor rewards because of the bad incentives they create, but that worry seems absent in the “sin” context. When I lived in Philadelphia, I once paid a very unskilled trumpeter to play somewhere other than underneath my window. Unsurprisingly, he was back the next night, hoping for another payout. It seems unlikely, though, that many people would deliberately injure themselves in order to qualify for government programs that help them to stop the injury—though no doubt policy makers will have to take care to make sure they don’t accidentally create these kinds of incentives.

Another approach is to use innovative policies that don’t rely on dollars at all. Most of the world requires tobacco sellers to display disturbing images of the health consequences of smoking on retail tobacco packaging. Studies, including a major investigation by the Australian government, have found that these images contribute to smokers’ will to quit. These pictures, like rewards, avoid the economic burden that taxes might put on poorer households, but unlike rewards, they do not cost money for other taxpayers. For this reason, it is disappointing that in 2014, New York courts refused (on technical administrative-law grounds) to sanction New York City’s experiment with non-tax policies to reduce soda consumption.

Overall, there is a strong case that policy makers often will want a mix of policies aimed at threats to the public health as serious as smoking and obesity. Some people may respond to one policy but not another—rich smokers might care more about frightening pictures, for instance. Mixing policies also allows each individual policy to be less extreme; combining an informational campaign with sin taxes might allow a lower tax rate. That, in turn, lowers any potential negative impacts of each component of the overall policy.

In short, sin taxes aren’t necessarily the best tool we have, but they’re often likely to be an important component of an effective overall public health policy.