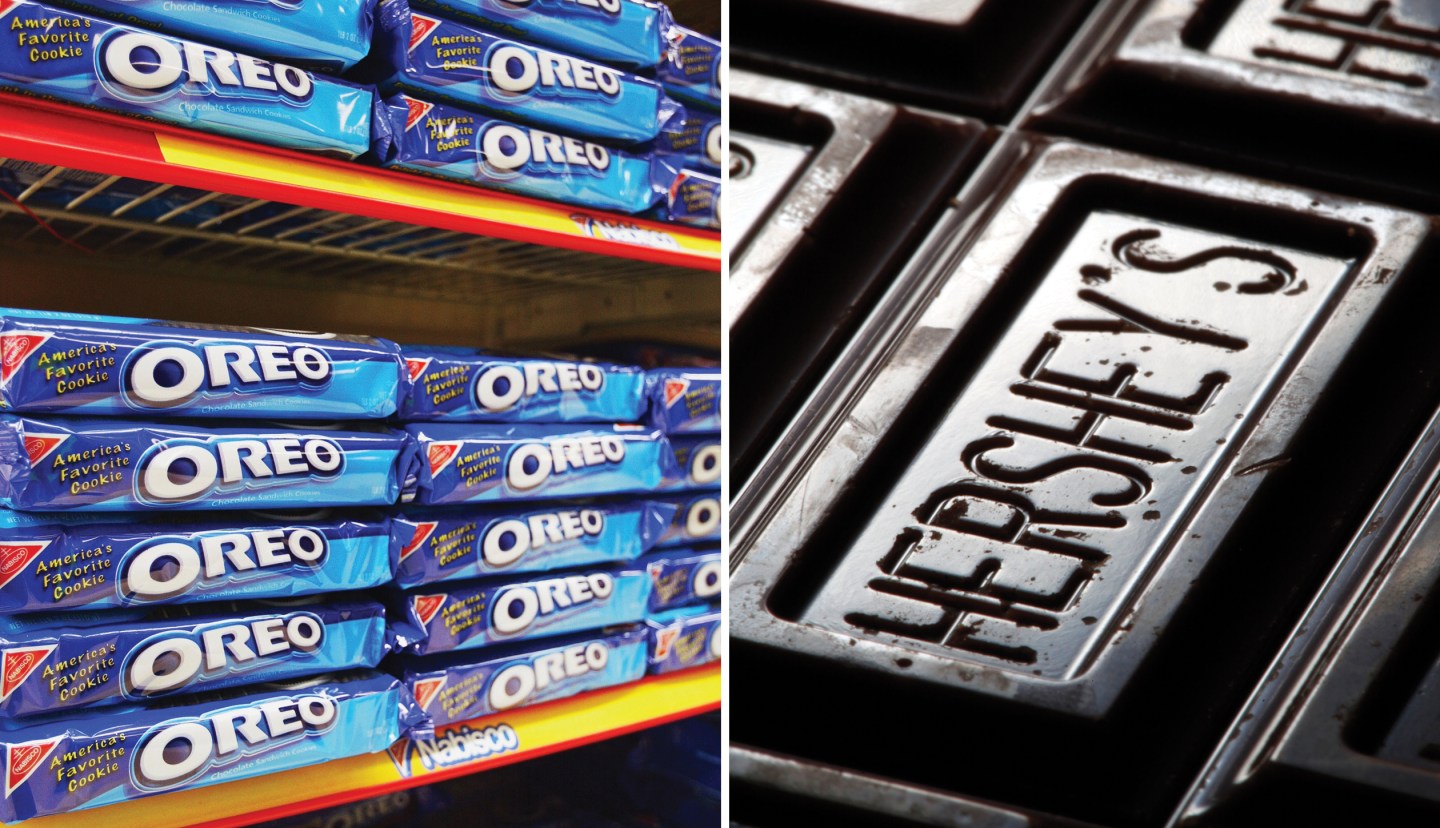 2nd Update: Hershey has confirmed the offer but added that the board “unanimously” rejected the interest from Mondelez.

Update: Mondelez has offered $107 per share for Hershey, half in stock and half in cash, Reuters reports. Media outlets report the bid is worth $23 billion. Additionally, CNBC reports Mondelez has offered to move its headquarters to Pennsylvania and change its name to Hershey.

Earlier: Mondelez has proposed a tie-up with Big Food peer Hershey which could create a major global snacking giant and combine the Oreo, Cadbury, and Reese’s brands under one roof. Hershey, however, swiftly rejected the offer.

Mondelez sent a letter to Hershey proposing the potential tie-up, according to the Wall Street Journal, citing people familiar with the matter. If the deal were to occur, the plan would be for the combined company to retain the Hershey name.

The news sent shares of Hershey (HSY) soaring on the rumored deal. Shares of Mondelez (MDLZ) climbed a more modest 2%.

A Mondelez-Hershey combo would result in a Big Food giant with close to $37 billion in annual sales and a market capitalization north of $90 billion. It would unite Mondelez’s Nabisco, Oreo, Cadbury, and Trident brands with Hershey’s namesake chocolates, Reese’s, and Kisses brands. Hershey’s revenue totaled $7.4 billion last year, while Mondelez was much larger with $29.6 billion.

A Mondelez person told Fortune that “as a matter of practice, we do not comment on market rumors or speculation.” Hershey, meanwhile, confirmed it received a cash-and-stock offer totaling $107 per share but added that the board “unanimously” rejected the interest from Mondelez. It added the company’s board and executives “are committed to enhancing value for all stockholders in accordance with the company’s strategic plan.”

Mondelez was part of the larger Kraft Foods Inc. until October 2012, when it completed the spinoff of Kraft Foods Group, with the remaining portion of the business renamed Mondelez. It is steered by CEO Irene B. Rosenfeld. Cookies and crackers make up 34% of Mondelez’s revenue, which is by far the largest product category for the company.

If the deal were to occur, it would create the world’s largest global confectionery company. Currently, Mondelez commands a significant portion of the market, 12.8%. That’s just behind the market leader Mars Inc. with 13.5% of the market, according to research firm Euromonitor International. Hershey ranks fifth with 5.2% of the market.

Hershey has been viewed by many as a takeover target—though most thought the acquirer would be Nestle. Both companies reported sales declines for 2015, and Big Food makers are facing broad challenges from tough economies in emerging markets, while consumers in the U.S. and other Western nations are lured by food startups challenging the popularity of well-known snack brands.