How Republicans Blew Their Chance to Attack Clinton on Benghazi 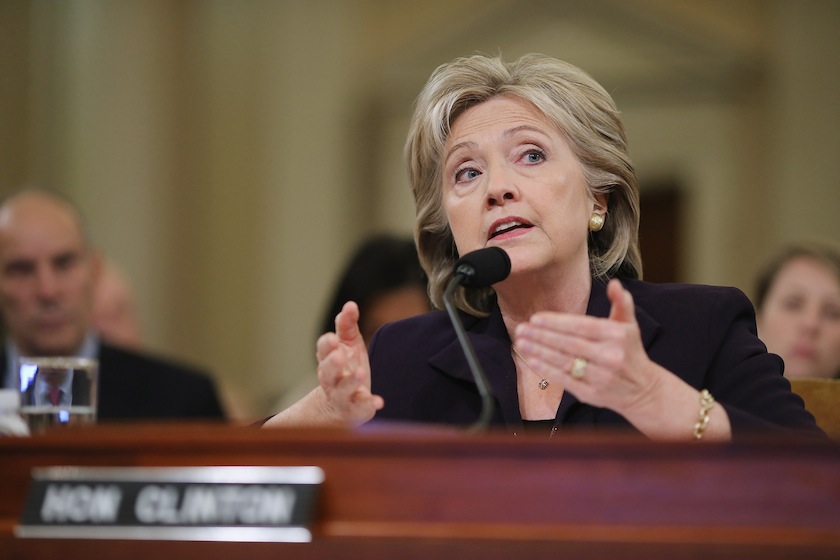 WASHINGTON, DC - OCTOBER 22: Democratic presidential candidate and former Secretary of State Hillary Clinton testifies before the House Select Committee on Benghazi October 22, 2015 on Capitol Hill in Washington, DC. The committee held a hearing to continue its investigation on the attack that killed Ambassador Chris Stevens and three other Americans at the diplomatic compound in Benghazi, Libya, on the evening of September 11, 2012. (Photo by Chip Somodevilla/Getty Images)
Photograph by Chip Somodevilla — Getty Images

The report issued on Tuesday by GOP members of the House Committee on Benghazi contains a straightforward case for attacking former Secretary of State Hillary Clinton. But House Republicans have not picked up on it.

The document cites an August 2011 memo in which Jake Sullivan, Clinton’s then-deputy chief of staff, said she has had “leadership/ownership/stewardship of this country’s Libya policy from start to finish.”

Clinton “has been a critical voice on Libya in administration deliberations, at NATO, and in contact group meetings—as well as the public face of the U.S. effort in Libya,” Sullivan bragged. “She was instrumental in securing the authorization, building the coalition, and tightening the noose around [Muammar] Gadhafi and his regime.”

President Obama has said the worst mistake of his presidency was failing to plan for the ouster for the late Libyan dictator, though he said intervening in Libya was the right move.

Libya is a mess. No one argues that the decision by the United State and its allies to conduct a bombing campaign that led to Gaddafi’s death left behind a functioning country, let alone a liberal democracy. The September 2012 attack on the U.S. consulate that killed four Americans was part of the anarchy that resulted from Gaddafi’s ouster.

Yet the Benghazi Committee spent more than $7 million and wrote 800 pages in a mostly unsuccessful bid to fault Clinton’s actions before and after the attack. The report details mistakes by U.S. officials, and the probe exposed Clinton’s use as Secretary of State of a private server for her email, the biggest drag on her presidential campaign so far.

But Democrats dismissed the inquiry as a partisan witch-hunt that revealed no information beyond what seven prior congressional probes unearthed. It failed to back conservative claims that Clinton or her staff inhibited a military response that could have saved lives, leaving two conservatives on the panel to issue their own addendum attacking Clinton.

For a political party that has famously focused on faulting anything Obama or Clinton touch, the Benghazi report represents a striking failure to coherently express a view most Americans have held since 2011: Clinton screwed up by urging intervention in Libya.

Clinton also supported the 2003 invasion of Iraq, which she now calls a mistake. Her Libya error suggests poor foreign policy judgment, a problem for someone with “Secretary of State” on their resume.

Yet rather than make that case, House Republicans have spent nearly five years burrowing into a Benghazi rabbit hole.

“The GOP is gaining little from the Benghazi mania, and the broader critique of Clinton’s foreign policy views is more persuasive,” said Trevor Thrall, a senior fellow in the defense and foreign policy department at the libertarian Cato Institute.

How did Republicans whiff so badly? Thrall chalked it up to “a deeply ingrained loathing of the Clintons that Republicans have harbored since the 1990s.” Then there’s the fact that many Republicans were hawkish on Libya as well. GOP leaders took one of two positions on U.S. intervention in the nation: Support or silence.

“We should go in. We should stop this guy, which would be very easy and very quick,” presumptive Republican presidential nominee Donald Trump said in 2011. “We could do it surgically, stop him from doing it and save these lives.”

Trump has struggled during his campaign to downplay his position, falsely claiming he did not weigh in on the matter or that he supported more limited action than the Obama administration took.

Sen. Rand Paul, a Kentucky Republican, can claim to have opposed the effort. During his presidential campaign, Paul made the case that Clinton’s biggest failure was backing “a war which made things less stable.” But Paul, whose foreign policy views often depart from his party’s, lost the primary race.

Top Republicans in 2011 not only supported military action in Libya but dismissed claims that the effort required congressional authorization.

“I respect your authority as Commander-in-Chief and support our troops as they carry out their mission,” then-House Speaker John Boehner, who created the Benghazi Committee, said in a March 23, 2011 letter to Obama. The letter pressed the president to clarify U.S. aims in Libya without committing Boehner to a clear position.

In March 2011, Senator Marco Rubio, who sought the GOP presidential nominee in 2016, said the White House waited too long to attack Gaddafi.

Rep. Trey Gowdy, the South Carolina Republican who chaired the Benghazi committee, campaigned for Rubio, implicitly endorsing the Florida Republican’s claim that Obama and Clinton’s approach was too restrained.

To be sure, Republicans aim to have their cake and eat it too. They criticize Clinton from all angles on Benghazi. The report describes efforts by Clinton aides to position her for credit when Libya appeared to be a success and notes Obama’s reference to the aftermath of intervention as his biggest mistake. But it also faults Obama’s “no boots on the ground” policy for Libya, mentioning it seven times in a bid to argue the policy contributed to the Benghazi attack.

It’s possible to fault the administration for both intervening in Libya and for doing it without ground troops. But that is a claim that won’t fit neatly on a bumper sticker. And it contradicts Trump’s claim that America’s “strong intervention” was an error.

By focusing on Benghazi for more than four years, all to damage Clinton, congressional Republicans sacrificed an opportunity to criticize the U.S. intervention in Libya or Clinton’s foreign policy record. They blew it on Benghazi.