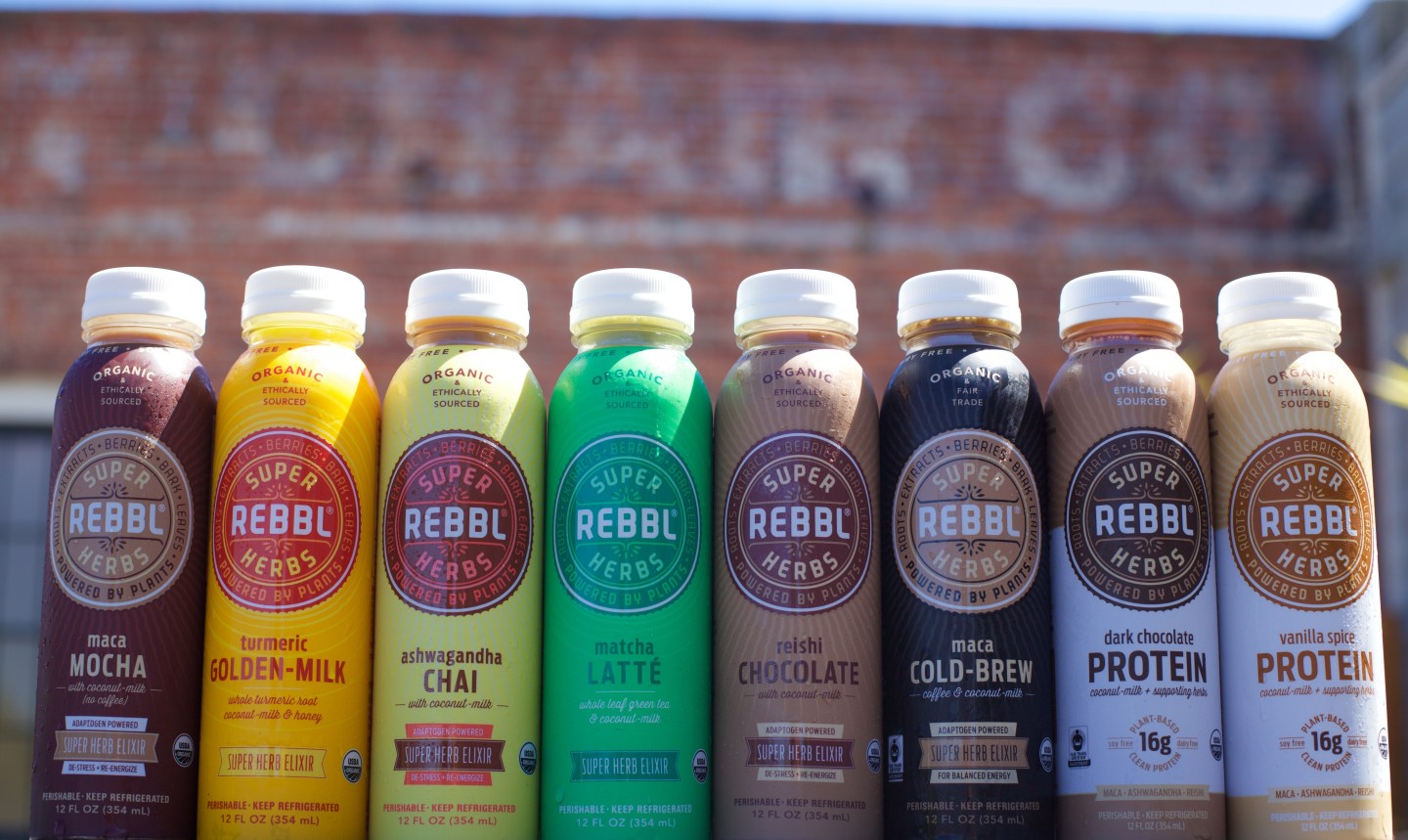 REBBL's drinks are made with adaptogenic herbs.
REBBL

Sheryl O’Loughlin helped turn organic food maker Clif Bar into a household name and co-founded a baby-food company that Campbell’s Soup bought for $250 million. Now, she has a new mission: To get America to drink “super herbs.”

O’Loughlin recently signed on as CEO of REBBL, a San Francisco-based startup that makes juices with “adaptogenic” ingredients such as maca, ginseng, and ashwagandha. Popular in Chinese and South American medicine, these herbs and roots allegedly adapt individually to people’s physiological needs and reduce inflammation and stress.

O’Loughlin didn’t necessarily need the job; she thought she’d stick to serving on corporate boards and teaching entrepreneurship at Sonoma State University. But all that changed when she met with REBBL’s executive team, which at the time included venture capitalist and human-rights activist David Batstone and then-CEO Palo Hawken. She was intrigued not only by the product, but by the company’s social mission, which is to help eliminate human trafficking in business supply chains. The combination was too interesting to turn up, she says. She joined REBBL’s board in January 2015 and became CEO a few months later in October.

Since her hire, the company closed a seed round of $4 million, led by PowerPlant Ventures, the venture capital firm co-founded by Mark Rampolla. Rampolla is also the founder of Zico water, a company he sold to Coca Cola in 2012 for an undisclosed sum. He and other investors made their investment through the online equity marketplace CircleUp.

“It took me three minutes to feel like I want to work with this woman, and to bet on this woman,” he says of O’Loughlin.

Rampolla adds he thinks REBBL has $1 billion opportunity ahead of it. That’s quite a market for a company that currently has annual sales of less than $10 million, and just six employees.

But O’Loughlin has an impressive track record. She worked at Kraft and Quaker Oats before becoming CEO of Clif Bar in 1998. During her nine years there, revenue doubled to $200 million and the company introduced some of its most popular products including Luna, the nutritional bar for women. In 2007, O’Loughlin went on to co-found a company called Plum Organics, which made organic food for babies and kids. In 2013, she sold that company to Campbell’s.

REBBL — an acronym for “roots, extracts, bark, berries and leaves” — started out as just one drink — a tea made of the herb Cat’s Claw, found in the Amazon. The idea for it came about in 2011, through conversations that co-founder David Batstone had with other business leaders and philanthropists about ways to improve local economies in the Peruvian rainforest. A long-time human rights activist, Batstone is co-founder of Not for Sale, a global anti-slavery organization, and co-founder of Just Business, a group that invests in social enterprises.

Currently, REBBL has nearly a dozen drinks, such as Matcha Latte, Reishi Chocolate, and Ashwaganda Chai. It sells its products in some 1,400 stores, including smaller grocery chains including Sprouts, The Fresh Market, and more recently, some large national stores including Whole Foods, Wegmans, and several Safeway stores in the Pacific Northwest.

But it may be facing something of an uphill slog. Sales in the nutritional drink and tonic category, the sector that market analysis company Euromonitor says adaptogenic drinks such as REBBL fit into, has experienced a significant decline for the past few years in the U.S. Sales of such drinks declined 22% to $1.36 billion from 2012 to 2015. That compares to a sales increase of 32% between 2010 and 2012 to $1.74 billion.

“Tonics and bottled nutritive drinks have been declining in the U.S. because the category has matured rapidly after undergoing equally rapid sales jumps,” Chris Schmidt, a senior analyst covering consumer health at Euromonitor, said in an email.

Related: What Richard Branson, Mark Cuban and Other Business Leaders Think of Brexit

O’Loughlin disagrees with that assessment. She says the velocity of sales for her product—which essentially describes the company’s repeat sales to customers in each location every week—tops other competing brands. In fact, those numbers resemble what she saw with both Clif and Plum, she says.

“There is a point in a brand when the tipping point is visceral and you can feel it hit,” O’Loughlin says, adding REBBL reached that point about five months ago.

But it’s not just about financial goals, O’Loughlin says. Equally important is the impact the product has on consumers and the global network of growers of the ingredients it puts in its drinks.

With that in mind, REBBL is in the process of becoming a B Corp, in furtherance of its goals of sustainability. Such companies have a double bottom line, one of which is devoted to a social objective. REBBL also returns 2.5% of its net sales to Not for Sale, to help end human trafficking.

“This is a company based on purpose,” O’Loughlin says. “If we just have financial results, than none of the rest of this happens, and to me this is not a success. Our bottom line is having this impact on the planet.”