How Lena Dunham’s Budding Empire Breaks Every Rule of Business 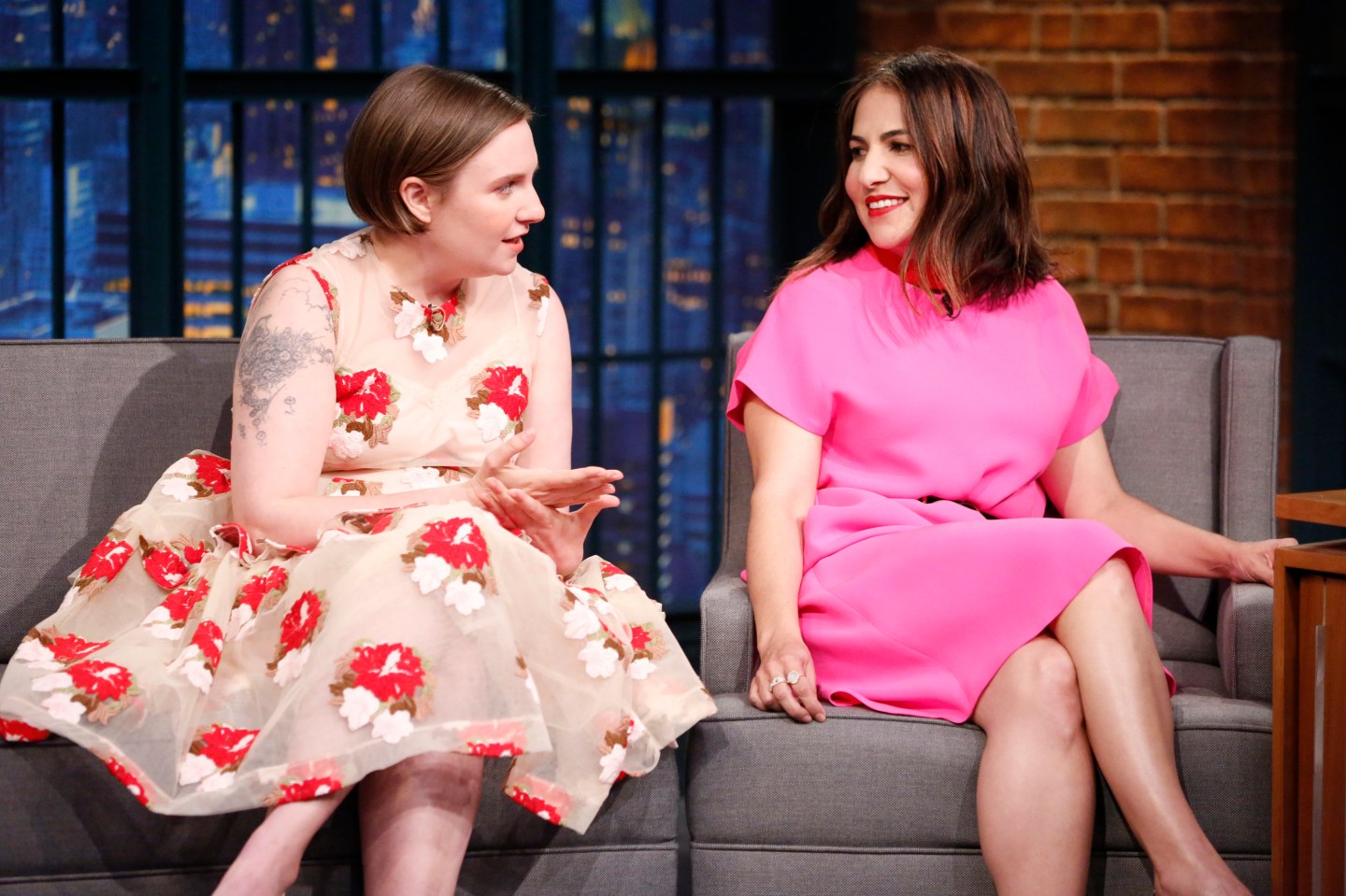 They got Hillary Clinton to own the f-word (feminist) and Jennifer Lawrence to discuss her personal wage gap. Alicia Keys opened up to them about not wearing makeup. Oh, and they also sell cute tote bags.

While most people now know Lena Dunham and Jenni Konner as the creative team behind controversial HBO series GIRLS, the pair are now making a name for themselves as emerging media moguls. Their Lenny brand, which began as simple email newsletter, has been quietly growing into major force, with a growing presence in digital media, podcasting, online retail, and book publishing.

Their success so far has been fast-paced—the first Lenny newsletter went out in September of last year—and much of it has been achieved by completely flouting conventional business wisdom. Fortune talked to Dunham and Konner about the evolution of Lenny—and how they’ve rewritten the rules of building a budding media empire.

During the 2014 book tour for her New York Times bestselling essay collection, Not That Kind of Girl, Dunham spent time talking with members of her audience. The more she did so, the more she realized that there was a big audience out there that wanted more of the feminist, progressive ideas and frank discussion of sex, friendships and relationships that GIRLS—and Dunham herself—are know for.

“The same lady can be obsessed with the presidential race and super-concerned about how to handle a zit and both those interests are valid and deserve airtime,” Dunham said in an email interview.

She and Konner soon began toying with ideas for a business that would provide those women with the content they crave. When they began zeroing in on a plan, they reached out to Benjamin Cooley, who, in addition to being Konner’s ex-husband and father of their two children, has an extensive background in entertainment management. He would ultimately become Lenny’s CEO.

While sites like Gwyneth Paltrow’s Goop and Zoey Deschanel’s HelloGiggles were thriving, the Lenny team wanted a more intimate and direct way to reach their readers, Cooley says. What they landed on was a decidedly old-school format, at least in digital media: The email newsletter.

From the beginning, the Lenny newsletter and its accompanying website buck the conventional format, which relies on short “listicles,” blurbs, and links. Instead, Lenny Letter specializes in long-form stories, essays, and Q&As. The first issue featured an in-depth interview with Hillary Clinton (Dunham is a vocal supporter). Konner says each issue mirrors what she and Dunham would be discussing with each other on any given day.

“It stems from the dialogue we are always in about work, feminism, politics, fashion, health and where it intersects. Part of what connects us is a bottomless appetite for information and dialogue. We see that same hunger from our readers,” she said in an email interview. Dunham says she knew they hit a nerve after Jennifer Lawrence’s essay about being paid less than her male co-stars started a viral conversation about wage inequality.

Since its launch, Lenny Letter’s subscriber list, which initially included the founders’ own network of media pros, academics, celebrities, and politicians, has skyrocketed to more than 445,000. Much of that growth has been driven by a deal stuck a couple months after the launch, which gave Hearst Media the rights to distribute and monetize the newsletter.

Hearst sells advertising and branded content, and promotes the Lenny brand across properties like Elle, Cosmopolitan, and Marie Claire. Konner and Dunham say they’re very involved with editorial planning and that they consult with the Hearst ad sales team on setting prices, developing advertorial, and working with advertisers.

From there, the opportunities came quickly. Konner and Dunham were already partners in their production company, A Casual Romance. They teamed up with IMZY, a community platform that uses paid moderators to help cut down on trolls, to create message boards to serve as a gathering place for their online community. And Random House, which published Dunham’s collection of essays, approached them to partner on a Lenny imprint, which will publish its first two books in 2017. (Hearst and Random House declined to discuss specifics about revenue shares.)

Working with disparate partners doesn’t worry Cooley. Instead, he points out that partnering with various specialists—book publishers, digital publishing giants, and the like—makes each part of the business stronger.

While Lenny is definitely designed to be profitable, says Cooley, the idea was never to grow Lenny into a huge brand. He points to the newsletter as a prime example of the company’s strategy.

“Hardcore readers who will want to sign up for a newsletter that comes in their inbox and will reliably open it—that’s not tens of millions of people. That’s 2 million people. That’s 3 million people,” he says. It’s not a billion-dollar business, but it is one that can hold its own—and grow—especially if it branches out into different ventures like podcasting and sells media across each of them, he says.

Of course, strong women’s voices—especially when they’re discussing issues like abortion and equal rights—are going to attract detractors. Dunham especially has been a favorite target of trolls ever since she broke into the mainstream with Tiny Furniture back in 2010. Since then, she’s been criticized over everything from the content of her book to the lack of racial and ethnic diversity in GIRLS.

But Lenny’s strategy of eschewing mass-market, please-love-me branding and its insistence on being bold, even when people don’t like it, has been a smart way to build a loyal following, says Syracuse University media professor Robert Thompson, who studies pop culture. Instead of adapting the voice to appeal to the greatest possible audience, the voice comes first, attracting the people with whom it resonates.

“In the case of this type of brand, in a fragmented world, to get to the ones who really love you, you’re going to have to have the collateral damage of people who really hate you,” he says.

Another way in which the Lenny team bucks conventional business rules is in the management mix itself. Blending friends, exes, and business could be a recipe for disaster, but it seems to work for Lenny’s leadership team. They insist that the key to the combo is putting people before work.

Dunham says she considers Konner “family” and that they tend to agree most of the time. Konner says their biggest disagreements happen when Dunham wants to get a new pet. (“I tell her what a bad idea it is and that she’s going to cause us all strife,” Konner says.) Cooley, meanwhile, notes that negotiating compensation with “a woman who also sends me a monthly child-support check is really interesting.” But the three agree that such complex business and personal dynamics force them to be honest with each other, deal with their issues, and move on.

“They key is that when we disagree, we really hear the other one out and agree that there is a more elegant solution than one of us ‘winning,’” Konner says.

Revised Rule #6: No plan is a fine plan

It would be easy to claim that Lenny’s success is the result of a well-planned and well-executed business plan, but Cooley says that’s not the case. The company doesn’t have a comprehensive growth plan. Rather, Dunham, Konner, and Cooley just follow their noses, branching off into whatever interests them.

They’re also open to experimenting with new business models. In May, Dunham took a page from the music industry, which has been increasingly relying on “surprise drops,” releasing a self-published and previously unannounced book, comprised of her old diary entries. Is It Evil Not to Be Sure? had a limited run of 2,000. At $25.00 each, the book quickly sold out, with all proceeds benefitting Girls Write Now, a writing mentoring program for young women. It’s now available as an ebook.

With GIRLS now in production on its sixth and final season, the team has been working on a variety new projects. Dunham and Konner produced Suited, a documentary about a Brooklyn tailor that caters to the LGBTQ community, which will air on HBO on June 20. Dunham says she wants to make more movies. Cooley says the team is looking at opportunities to bring video and possibly a podcast network to Lenny, playing on the success of Dunham’s “Women of the Hour” series, which she hosted for BuzzFeed in 2015.

“Our interests are pretty boundless, as is our appetite for new creative experiences,” says Konner. “We just want to be sure that what we’re creating is pushing the ball forward for women and diversity in media.”