What the Rise Of Trump and Brexit Have In Common 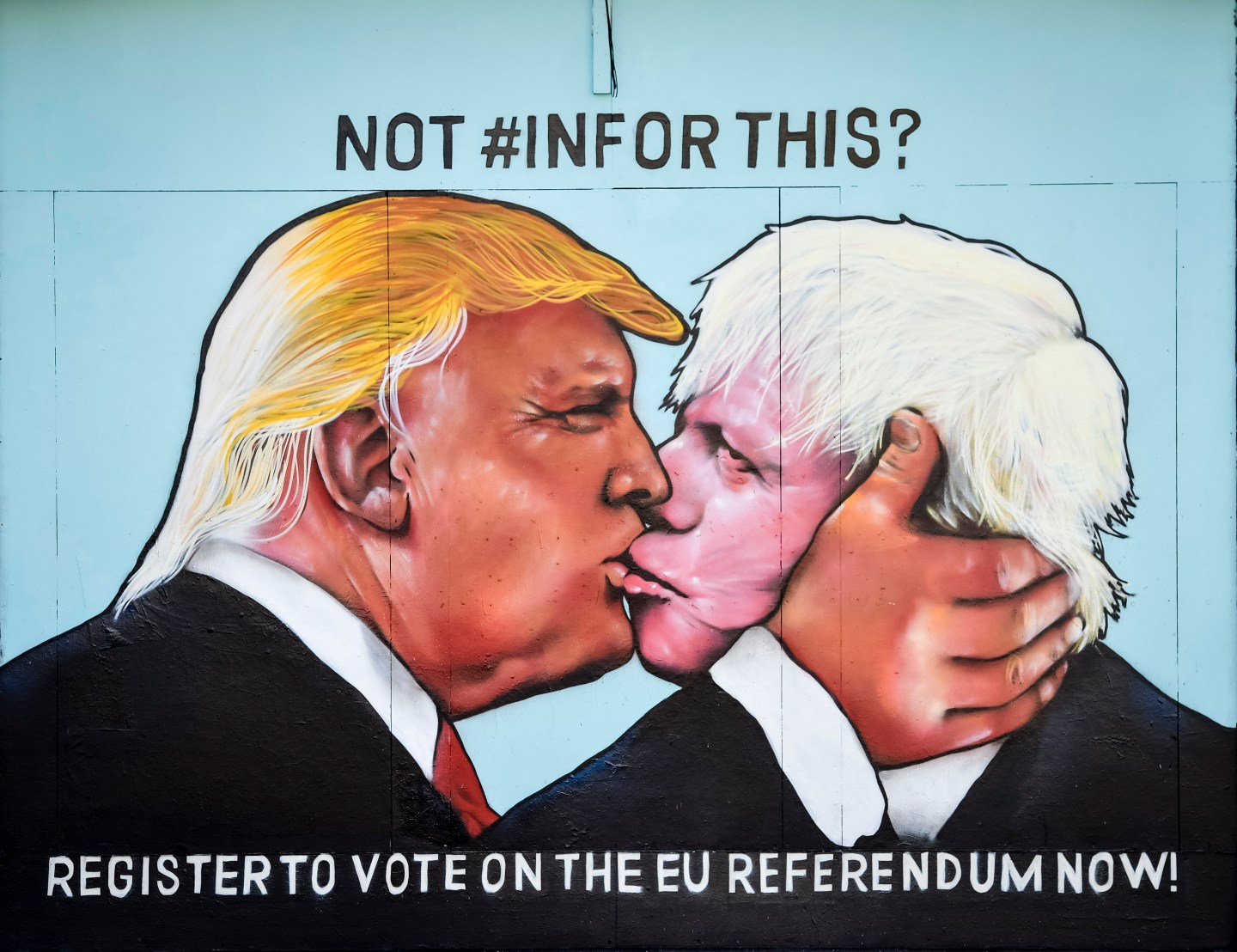 EU referendum. A graffiti mural of Donald Trump and Boris Johnson kissing, sprayed on a disused building in the Stokes Croft area of Bristol. Picture date: Tuesday May, 24, 2016. The image, called 'The Kiss of Death' and painted by pro-EU campaign group We Are Europe, highlights the upcoming deadline for voter registration for the referendum, on June 7th. Photo credit should read: Ben Birchall/PA Wire URN:26424540
Ben Birchall — PA Wire/AP

You would be forgiven for not knowing if you were in the UK or the US lately based on the exclamations of the people around you. The UK “Brexit” referendum is neck-in-neck in the final week before the vote. In the US, Donald Trump has a, albeit remote, chance of winning the presidential election despite regularly contradicting himself and responding to the deadly Orlando massacre by calling for a ban on all Muslims trying to enter the US. The expected coronation of Hillary Clinton as the Democratic candidate was threatened by an out-of-nowhere populist revolt led by Sen. Bernie Sanders. The questions of “What is happening to my country?!” and “I want my country back!” can regularly be heard on both sides of the Atlantic.

Most people explain the success of the Vote Leave and Trump campaigns (and the near-success of Sanders’) by focusing on the passion of the “Brexiteers” and “Bernie Bros” or Trump’s adept use of social media. These explanations are totally missing the point.

The success of these campaigns reflects a global political shift that is much bigger than Brexit or the US elections, and it is driven in large part by economics. A glut of global resources has rung the death knell for traditional business cycles in the developed world, creating fertile ground for populists across Europe and the US who are angry about rising inequality and are anti-globalization, anti-immigrant and anti-elite.

Populist movements hail from both the right and the left wings of the political spectrum and tend to view their societies in terms of “us” and “them,” with “them” often defined as foreigners or elites. Populist parties generally perform better in opinion polls and elections during an economic downturn. As a result, the rise of populist movements is roughly correlated with the business cycle.

But this wave of populism is different. Developed economies are not recovering in the conventional cyclical manner and are stuck in a protracted period of low growth. Today’s resurgence of popular sentiment is a structural—not a cyclical—phenomenon.

Traditional business cycles are based on the notion that resources and capital are scarce. A surge in demand results in an increase in investment, eventually leading to overproduction, a fall in prices, declining investment, rising unemployment and economic slump. As production slows and labor and other inputs are repriced, value investing kicks in, employment picks up and the business cycle resumes.

We no longer live in a world in which many resources and capital are scarce relative to demand. There is a glut of savings and cheap labor globally. The oversupply of cheap labor is the result of adding billions of workers and would-be-workers, mostly in post-socialist countries, to the global labor market in a period of only 25 years. A glut of labor has resulted in sluggish wage growth globally. We also have an excess of liquidity fueled by advanced nations’ central bank interventions in the wake of the global financial crisis, which has failed to transmit to investment.

An unattractive alternative to the present dilemma, the repricing of developed economies’ assets, labor and other inputs—as would normally be expected by traditional business cyclical theory—would result in massive destruction of wealth and be incredibly painful for debt-laden households. As a result, central banks continue to pursue policies to avoid it, goosing markets and exacerbating the oversupply of debt and liquidity. The result is that the traditional business cycle has come to a grinding halt.

If, for the time being, at least, we cannot count on robust cyclical recoveries, but are instead stuck in economic doldrums in the western world, we have the perfect environment for populist parties to emerge. This explains the popularity of anti-EU, anti-immigrant Boris Johnson and Nigel Farage in the UK and the acceptance of isolationist, anti-globalisation, anti-immigrant Trump among a large swathe of the US population. That the present situation emerges from exogenous conditions of oversupply, makes it especially easy for populists to point fingers abroad (one might recall, in this connection, a certain German populist between the wars blaming the victors of Versailles for his country’s fate).

This phenomenon stretches well beyond the UK and US. One only has to look to the governments in Greece, Portugal, Hungary, Poland and Slovakia to find populists running the country. The far-right Freedom Party, narrowly missed winning the Austrian presidential election last month. The Five Star Movement in Italy just won Rome’s mayoral election. Spain can’t manage to put a government together because the traditional parties cannot work with the populist Podemos and Ciudadanos. The Front National is expected to win the first round of the French elections next year, and German politicians are fretting about the increasing popularity of the Alternative fuer Deutschland. Populist parties are emerging all over Europe.

But there are options for addressing the surge of populist demagogues in the West. They principally focus on restarting the business cycle by creating demand and addressing the issue of global oversupply. One option is aggressive and persistent fiscal stimulus. Large scale infrastructure projects in the west, developed to recycle the global capital glut and to restore employment and productivity, would undoubtedly do the trick. Unfortunately, this seems unlikely in Europe and the U.S., with Germany wed to an orthodoxy of faux-fiscal responsibility and the Republican party dedicated to shutting down constructive legislation in the U.S. Congress. Another option is wealth redistribution to put money in the hands of those who are more likely to spend it. This is a politically toxic policy and so is unlikely to find many champions among policymakers, or among a segment of the electorate unwilling to stomach subsidies to “those people.” A third option, spoken of more frequently of late, is to employ helicopter money, providing a permanent transfer from central banks to households. This is only slightly less toxic to policy elites, but would clearly have broad popular support. Nevertheless we are not holding our breaths in the expectation of money suddenly raining down on households.

Even if we take a step back from demagoguery, if the UK chooses to stay in the EU and Trump is ultimately defeated, we must not breathe a collective sigh of relief and go on with business as usual. We must examine how on Earth we got so close to embracing populism and “alternative-truth” politics. Unless we address the persistent global oversupply of capital, production and labor by restoring demand and restarting the business cycle, we can be sure that, even if we step away from the cliff’s edge this time around, there will certainly be a next time.

Daniel Alpert is Managing Partner of Westwood Capital, LLC and a fellow in economics at The Century Foundation.