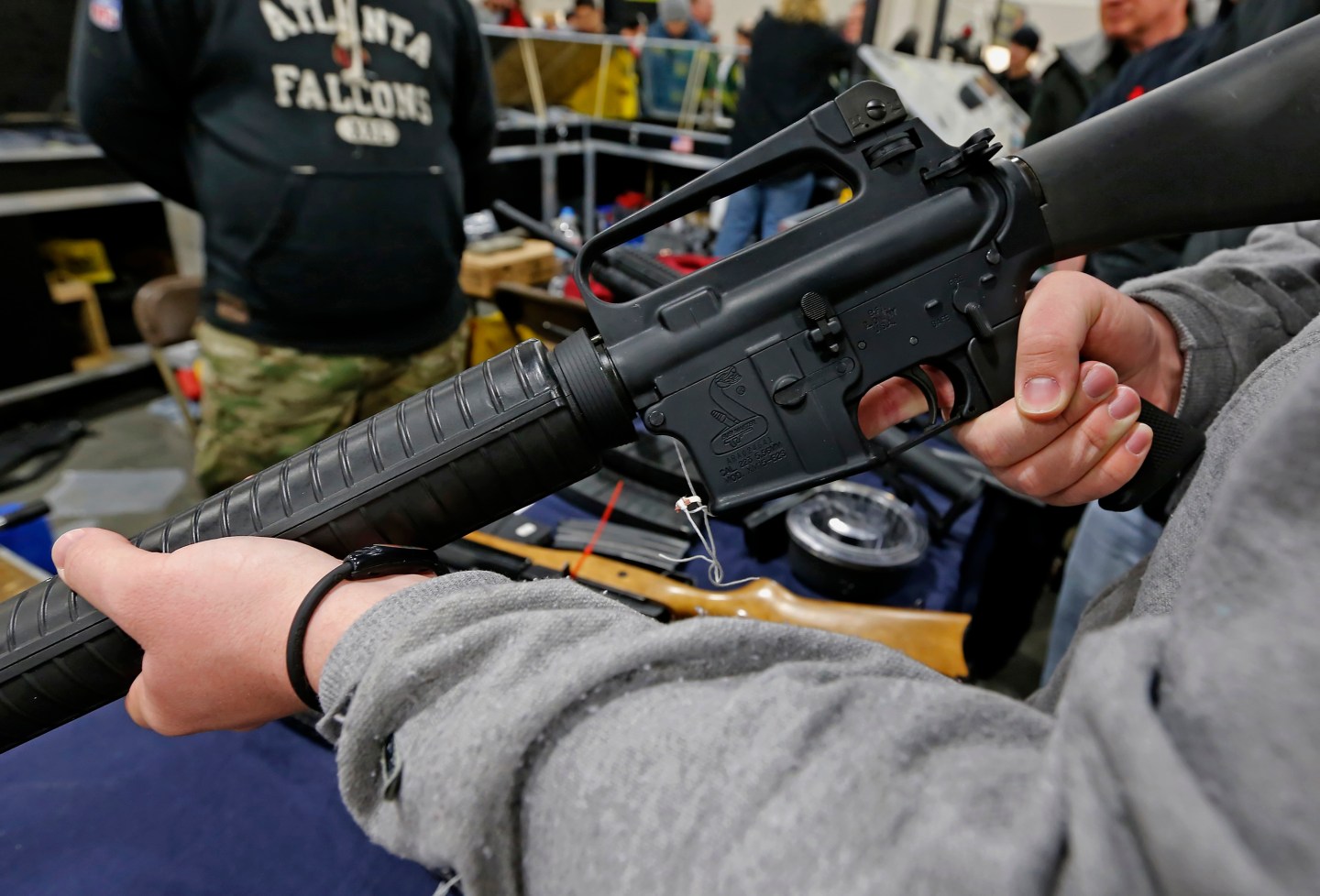 A man holds a Bushmaster AR-15 Model A2 semi-automatic assault rifle at the Rocky Mountain Gun Show in Sandy, Utah, U.S., on Saturday, Jan. 5, 2013. A working group led by Vice President Joe Biden is seriously considering measures that would require universal background checks for firearm buyers, track the movement and sale of weapons through a national database, strengthen mental health checks and stiffen penalties for carrying guns near schools or giving them to minors. Photographer: George Frey/Bloomberg via Getty Images
Photograph by George Frey—Bloomberg via Getty Images

What do James Holmes, Adam Lanza, and Omar Mateen have in common? Besides being the perpetrators of three of the deadliest mass shootings in U.S. history, they all share a preference for the AR-15 assault rifle.

The AR-15 assault rifle was used at the Aurora, Colo. shooting, the Newtown, Conn. shooting, and now the mass shooting in Orlando, Fla. that killed 50 and is officially the deadliest such massacre in U.S. history. Quartz reported that an illegally modified version of the rifle was also used in the San Bernardino attacks.

So why is the AR-15 so appealing to mass shooters?

To answer that question, it’s best to look at why the AR-15 is so popular in general.

According to one AR-15 enthusiast on the conservative pro-Second Amendment site Bearing Arms, “The popularity of the AR can be traced in part to the fact that it is a semi-automatic version of the rifle used by the men and women of the military.” For those who have a background in either the military or law enforcement, or who have relationships with them, the AR-15 is “is a configuration they are familiar with and enjoy shooting.”

Quartz explained its appeal a little differently. “While it can’t spray bullets like a machine gun in movies, it does reload quickly, allowing shooters to fire as fast and as often as they can pull the trigger.”

Not only is the AR-15 a fast-firing gun, it’s highly customizable. There are numerous legal adjustments that can be made to the AR-15’s receiver, stock length, sights, hand grip, and even the barrel. Illegally, even more changes can be made. As the Huffington Post pointed out, San Bernardino shooters Syed Rizwan Farook and Tashfeen Malik were able to alter the AR-15 to have a larger magazine and to function like a fully automatic, military-style weapon.

Essentially, the AR-15 is a versatile civilian-grade firearm that boasts ease of use, sheer firepower, and a certain cultural and aesthetic cache.

While Colt alone makes the official AR-15, variants and knock-offs are made by a huge number of gun manufactures, including Bushmaster, Les Baer, Remington, Smith & Wesson (SWHC), and Sturm & Ruger (RGR), just to name a few. TacticalRetailer claims that from 2000 to 2015 the AR manufacturing sector expanded from 29 AR makers to about 500, “a stunning 1,700% increase.”

In addition to so many manufacturers putting out semiautomatic centerfire rifles, there are plenty of retailers stock them. Traditional mom and pop gun stores, pawn shops, and gun shows are a few sources, as are Cabella’s (CAB), Bass Pro Shop, and other outdoor retailers that stock assault rifles alongside more traditional hunting rifles and hand guns. And while Walmart (WMT) stopped selling semiautomatic rifles in 2015, citing lowering demand, it was just a few years ago that retailers couldn’t keep AR-15 rifles on the shelves.

Newsweek notes that the FBI conducted the highest ever number of background checks on prospective gun owners in 2013, with 21 million requests. The spike in both background checks and gun sales followed President Obama’s reelection and talk of tougher gun legislation after the July, 2012 Aurora shooting and December, 2012 Sandy Hook massacre. While not all of those gun sales were AR-15s, various statistics agree that there are roughly 5 million to 10 million assault rifles in the U.S.

According to the Guardian, data from the Bureau of Tobacco, Firearms, and Explosives shows that there were just over 2 million rifles produced for domestic use by eight major manufacturers from 2000 to 2010, and that this “could mean around 20% of rifles manufactured in the U.S. are AR-15-pattern weapons.”

At peak popularity in 2013, supply and demand pushed prices of AR-15 style rifles up to $2,000, with accessories and ammo similarly inflated. Today a Colt LE6920 Semiautomatic Tactical Rifle sells for about half that at $999.99 at Cabella’s. A similar, lower-end Hi-Point Semiautomatic Carbine Rifle sells at the same retailer for $269.99.

Relatively inexpensive, readily available, highly customizable, and easily modified (whether legally or into a fully automatic weapon), the reasons for the AR-15’s popularity are apparent.

Reuters cites conflicting statistics on how much blame assault rifles actually deserve for gun violence. On one hand, “so-called assault rifles account for a small fraction of the United States’ 30,000 annual gun deaths” but “they have been used in at least 10 mass shootings since 2011, according to a database compiled by Mother Jones magazine.”

On the other hand, the article later points out that “assault rifles do not often turn up at murder scenes. Handguns accounted for at least 48% of all murders between 2010 and 2014, according to FBI data, while rifles—a category that includes more traditional types of long guns—accounted for 2.4%.” Meanwhile, knifing casualties were about four times as high.

That said, Time reports that Orlando shooter Mateen was able to obtain his AR-15 despite first attracting FBI attention in 2013 and again in 2014 for a potential affiliation with terrorist networks. Not only that, “Mateen had legally purchased at least two firearms—a handgun and a long gun—within the last week” prior to the shooting.

The AR-15 is especially easy to obtain in Florida. According to Quartz, Florida has a “mandatory three-day waiting period between purchase and delivery of a handgun” but “no waiting period for guns that requires two hands to hold (like the AR-15).”

As with the other mass shootings committed with AR-15s, the Pulse nightclub shooting is already re-opening the debate over gun laws, and is drawing especial attention to Florida politicians. For example, David Sirota of International Business Times posted a tweet mentioning Jeb Bush’s support of Florida’s current gun laws, “Would be interesting to hear what @JebBush has to say about the Florida gun laws he helped create…”

Would be interesting to hear what @JebBush has to say about the Florida gun laws he helped create… https://t.co/UFUjqOETEg

Meanwhile, the Wall Street Journal points out that the Orlando shooting could have an impact on the upcoming contest for Marco Rubio’s Florida Senate seat.

While firearm proponents and detractors continue to debate whether the AR-15’s power and rapid-fire capabilities are necessary for home defense and hunting, or belong in civilian hands at all, the survivors who were at the Pulse nightclub continue to share details of their experience.

“I wasn’t sure if it was the music. I thought it was a Ying Yang Twins song,” Christopher Hansen said, Time reports. “It went with the beat almost until you heard like, too many shots. That’s when you just know. It was chaos.”

Janiel Gonzales, another Orlando shooting survivor, told ABC News, “He was just spraying very wildly, like whoever was in the way was going to get hit, basically.”

Joshua McGill, who had also been at the Pulse the night of the massacre, wrote on his Facebook account after the shooting. “Words cannot and will not describe the feeling of that. Being covered in blood…Trying to save a guys life that I don’t even know.”