These Are the Most Promising Experimental Cancer Drugs 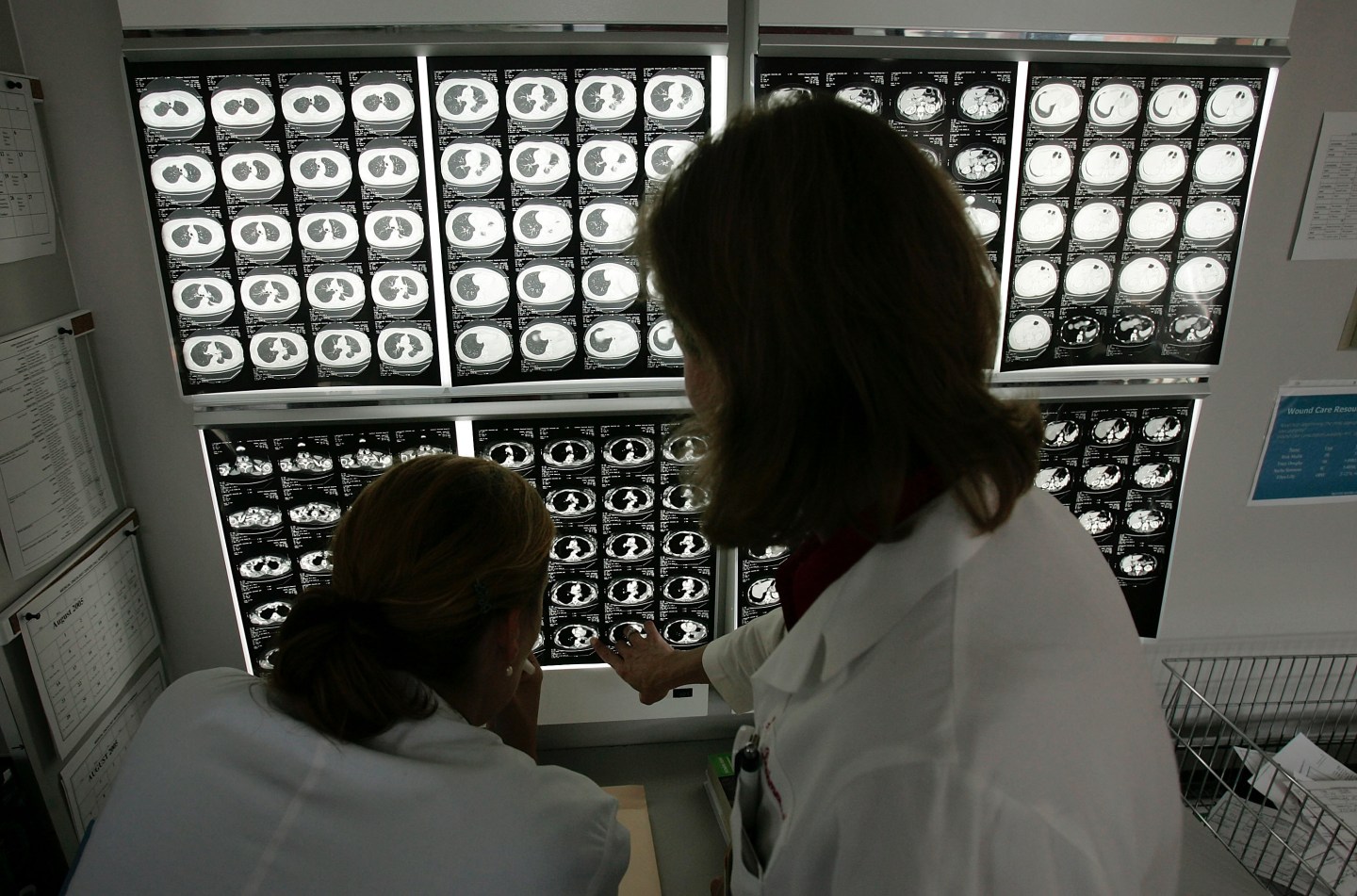 More than 35,000 oncologists, researchers, life science executives, and other stakeholders flocked to the world’s largest cancer conference between June 3 and 7 to discuss the most exciting new advances in the field. The annual meeting of the American Society of Clinical Oncology (ASCO) wrapped up on Tuesday afternoon.

Cancer immunotherapies, or treatments that use the body’s immune system to fight cancerous cells, were once again the most hotly anticipated drug class at the conference. As we explained in our ASCO primer, pharma giants like Merck (MRK) and Bristol-Myers Squibb (BMY) and biotechs like Juno (JUNO) and Kite Pharma (KITE) had a lot to prove through their clinical trial updates on experimental immunotherapies.

Fortune spoke with Brad Loncar, an independent biotech investor who launched the first-ever cancer immunotherapy index fund last year, about the biggest winners out of ASCO and which cancer drug hopefuls you should keep an eye on going forward.

According to Loncar, U.S. pharma giant Johnson & Johnson (JNJ) and Danish biotech partner Genmab stood above their peers during the conference with stellar new data for Darzalex, a treatment for multiple myeloma (a rare blood cancer) that was first approved last year.

“I think in terms of publicly traded companies, this was the most exciting,” he said. “Not only was the data presented here, which was for a combo of Darzalex and [Takeda Pharma’s] Velcade, excellent, but they also have a presentation at another upcoming conference in combination with Celgene’s (CELG) Revlimid that’s just spectacular.”

“These two studies are important because it’s showing that Darzalex can be included in combination with different things and producing spectacular success,” said Loncar.

Two stocks that quickly blasted off after their ASCO presentations over the weekend were Kite Pharma (KITE) and Juno Therapeutics (JUNO). Though shares of the companies have leveled off somewhat since then, they’re still up 17% and 13%, respectively, over the last five trading days.

Those two companies, along with their larger competitor Novartis (NVS), are developing experimental chimeric antigen receptor T-cell (CAR-T) technology platforms, which are highly personalized treatments that involve extracting patients’ immune cells, re-engineering them to target their specific cancers, and then pumping these sniper-cells back into the body.

This method has proven most effective in blood cancers (rather than solid tumors) such as leukemias and lymphomas. And while early results have been promising, some skeptics have held out on the hype due to concerns over side effects and whether results will persist in later-stage trials.

Juno and Kite responded to the naysayers with new updates on their respective pipeline stars, JCAR15 and KTE-C19, at ASCO. The former produced a complete response (meaning all visible signs of the cancer had disappeared) in 75% of difficult-to-treat acute lymphoblastic leukemia patients and even stronger results (90% complete response) in those who were very early in their disease. KTE-C19 spurred either a complete or partial response in 13 out of 19 patients with large B-cell lymphomas.

Both companies say they hope the data will lead to FDA regulatory submissions soon. In fact, their treatments could be on the market as soon as 2017. (Novartis is also aiming for that general timeline with its own drug, CTL019.)

“There’s absolutely no reason that every patient with a B-cell malignancy shouldn’t be cured with this technology,” Juno CFO Steve Harr told Fortune in an interview.

What seems to have really reassured investors, even more than the strong response rates, is the companies’ improving ability to mitigate negative side effects.

“What you’re seeing here that’s really important is they’re starting to prove to people that they understand how to manage the side effects, because that’s always been the biggest deal with these, ” said Loncar. “Essentially what they’re doing is kind of simple—for the patients with the largest disease burden, they’re just starting off at a lower dose.”

One of the next big challenges for CAR-T therapies? Tackling solid tumors.

Roche and its biotech arm Genentech got some good news before ASCO even began, when the FDA approved its immunotherapy drug Tecentriq for the most common type of bladder cancer. The company has been touting the medication, the first-ever approved bladder cancer drug that targets a specific protein pathway in the body called PD-L1, as the backbone of its next-gen immuno-oncology program.

The firm had even more positive results to present at the convention, announcing that Tecentriq shrunk tumors in 24% of advanced bladder cancer patients who couldn’t use standard chemotherapy in a mid-stage trial. Dan Chen, head of Roche/Genentech’s cancer immunotherapy unit, told Fortune the data were particularly promising since they could lead to Tecentriq becoming a first response treatment and give additional credence to the company’s argument that immunotherapies are more effective the earlier they’re given to patients.

Merck (MRK) beat competitor Bristol-Myers Squibb (BMY) to a pioneering 2014 approval for its immunotherapy Keytruda by about three months. But BMS’ rival treatment Opdivo has been significantly outpacing Merck in sales, and the company is trying to amass new approvals for treatments to different types of cancers as quickly as possible.

The drug had $942 million in global 2015 sales (versus $566 million for Keytruda) and, according to the company, has been prescribed to 60% of new lung cancer patients. According to new data presented at ASCO, a combination of Opdivo and BMS’ other immunotherapy, Yervoy, shrunk lung cancer tumors in 39% to 47% of study participants depending on the amount of Yervoy used. And using lower levels of Yervoy in combination with Opdivo actually prompted more tumor shrinkage, underscoring the fact that dosing is a critical and unpredictable factor for immunotherapies.

Both Merck and Bristol-Myers are testing their drugs in dozens of different cancer types.

Pfizer (PFE) breast cancer treatment Ibrance burst onto the scene in early 2015 and proceeded to dominate in a new therapeutic arena called cyclin-dependent kinase (CDK) 4 and 6 inhibitors. The treatment has proven extremely effective in the hardest-to-treat breast cancers and is on the verge of achieving blockbuster drug status (meaning annual sales of $1 billion or more).

Major competitors like Eli Lilly (LLY) and Novartis are in the process of making competing therapies (Lilly’s abemaciclib and Novartis’ ribociclib). But according to Loncar, Pfizer will continue to benefit from a distinct first-to-market advantage barring spectacular results from its rivals.

“I think that Lilly’s abemaciclib data is still a hair underneath Pfizer’s,” he said, “so I think when you add that on top of the fact that Pfizer’s already out there and selling, I have confidence that they’re still going to dominate that market.”

“Now, that may change when we see Novartis’ data at some future date,” he added. “But I think that Pfizer still has a competitive edge….”

If there’s one company to watch out for as a potential buyout target, it’s the obscure, privately-held German biotech Ganymed.

The firm seemed to come out of nowhere to present stellar results for its experimental IMAB362 for stomach cancer. The treatment homes in on cancerous cells that have a protein called Claudin18.2.

The results? “More than twice the number of patients [were] still living at the end of the study after receiving IMAB362 plus chemotherapy compared to chemotherapy alone,” according to Ganymed CEO Özlem Türeci, with patients showing the highest level of that protein biomarker responding best to the treatment.

You can read all of Fortune‘s ASCO coverage here.