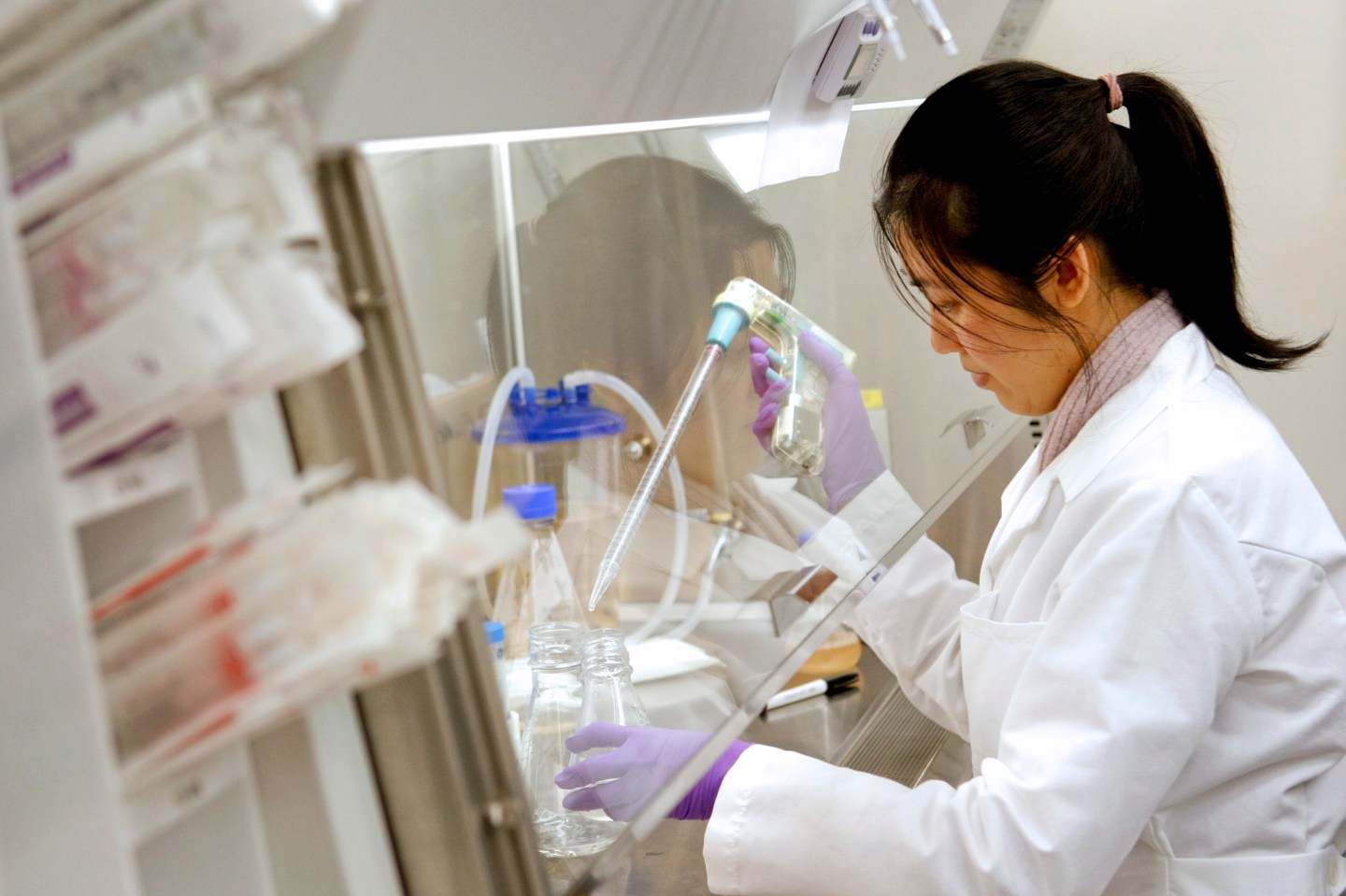 UNITED STATES - MARCH 27: Kim Le, a research associate for FivePrime Therapeutics, works with tissue cells in a laboratory at the company's headquarters in the Mission Bay district of San Francisco, California, U.S., on Friday, March 27, 2009. FivePrime, a closely held company discovering protein-based therapies, moved to Mission Bay in 2005 from South San Francisco. The once-vacant expanse of land two miles from downtown San Francisco is turning into a biotechnology hub, adding almost 300 jobs to the city's economy last year even as 3.7 million Americans were thrown out of work. (Photo by Erin Lubin/Bloomberg via Getty Images)
Photo by Bloomberg—Getty Images

An under-the-radar German biotech company made waves this weekend with promising mid-stage clinical trial data showing that it may have developed a groundbreaking new treatment for stomach cancer.

Ganymed Pharmaceuticals’ experimental therapy IMAB362 significantly boosted advanced gastric cancer patients’ overall survival, according to company data presented on Sunday at the American Society of Clinical Oncology (ASCO) meeting in Chicago. That’s significant because, on average, just 30% of those afflicted with stomach cancer are still alive five years or more after being diagnosed, according to the National Cancer Institute.

IMAB362 is a targeted treatment that harnesses the body’s immune system to battle tumors. It goes after a specific biological signal in cancerous gastrointestinal cells called Claudin18.2.

“We are very excited to see that patients in our study benefited very significantly from being treated with IMAB362 with more than twice the number of patients still living at the end of the study after receiving IMAB362 plus chemotherapy compared to chemotherapy alone,” said Ganymed CEO Özlem Türeci in a statement.

The medication’s effectiveness swells along with how much Claudin18.2 is present in patients’ cancer cells. In those with the highest levels of the protein, a regimen of IMAB362 combined with standard chemotherapy extended overall survival rates to 16.7 months. That’s nearly double the rate versus treatment with chemotherapy alone. The therapy also significantly boosted survival rates in patients with lower levels of the protein without producing unacceptable spikes in side effects.

What’s most promising about Ganymed’s therapy is that the unique protein it targets is also present in a large number of bile duct, ovarian, and lung cancers, meaning the drug could eventually pick up a large number of potential applications if its results hold in larger trials.

Ganymed’s majority shareholder is ATS Beteiligungsverwaltung GmbH, and the company was spun off from the Universities of Mainz and Zurich.

Fortune has been reporting on the biggest developments out of ASCO. You can read all of our coverage here.