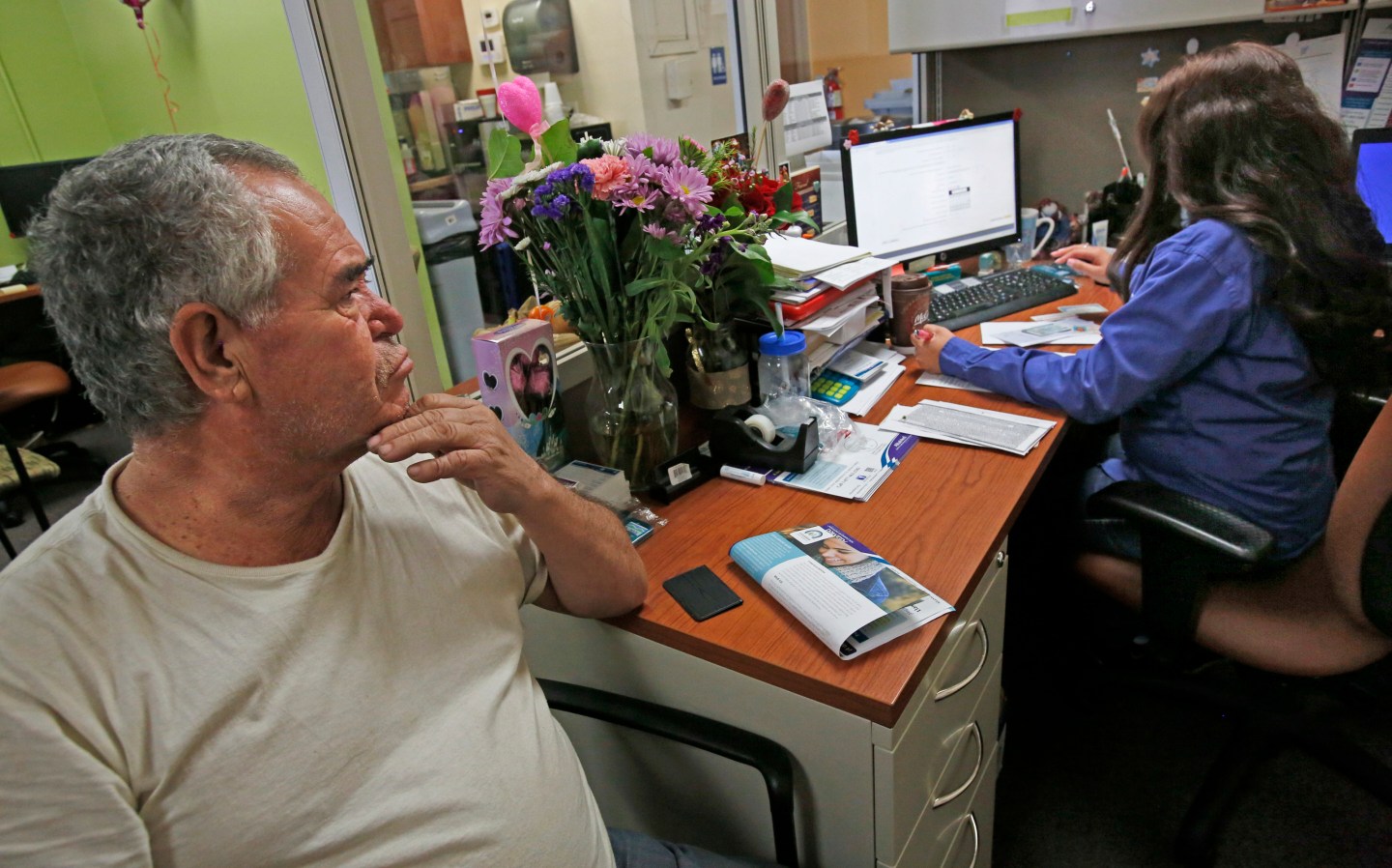 LOS ANGELES, CA. - FEBRUARY 14, 2015: Jose Mora, 62, signs up for Obamacare with Kristie Navarro, right, as people sign up for Obamacare at AltMed Health Services in Los Angeles on February 15, 2015. Tomorrow is the last day that people can sign up for the program. (Photo by Anne Cusack/Los Angeles Times via Getty Images)
Photograph by Anne/Cusack LA Times—via Getty Image

UnitedHealth (UNH), America’s biggest health insurer, is leaving Obamacare in the nation’s most populous state. But how much that will ultimately matter is a more open question.

The insurance giant announced in April that it was planning to abandon all but a “handful” of the 36 statewide individual insurance marketplaces where it sells Affordable Care Act plans. Details were sparse at the time, but the company has now revealed that it will sell full plans in just three states (Nevada, New York, and Virginia) and provide more limited offerings in another three (Georgia, Illinois, and Florida) through a subsidiary in 2017, according to postings reviewed by the Wall Street Journal. One highlight departure is from the Golden State’s Obamacare market, Covered California.

UnitedHealth is known for its dominant position in the large group and employer insurance sector. But it’s been staring down mounting losses for its Obamacare individual plans. Big insurers such as Humana (HUM) have also contemplated leaving some of the health law exchanges in the wake of fiscal and regulatory uncertainty; competitors like Anthem (ANTM) and Aetna (AET) are planning to keep their skin in the game; and many market participants are planning big premium spikes for 2017.

But UnitedHealth’s California exodus may not ultimately have an outsize effect on the Obamacare market given the insurer’s very recent and small-scale entry into the exchange. Covered California spokesperson James Scullary noted the firm began offering Obamacare plans just last year after avoiding the state’s marketplace for its first two years—and had a total of about 1,200 Covered California customers in 2016 (that’s out of 1.4 million consumers on the exchange).

“We had made it clear that we weren’t going to have any new health insurer entries for the first couple years [of Obamacare’s marketplaces], Scullary told Fortune in an interview. “We were going to give those companies that took the plunge the opportunity to establish their risk pools and have stability in the market. And then in year three, we look to expand into regions where we needed expansion. That included bringing UnitedHealth in to help steer some of our more rural areas. Then, they would have had the opportunity to expand statewide if they wanted to for 2017.”

“This doesn’t affect other California businesses,” said a UnitedHealth spokesperson in response to Fortune‘s request for comment. “As our CEO stated last year and as recently as last month, we have been evaluating public exchanges on a state-by-state basis.”

“We have maintained a regular public dialogue since November about the individual exchange market, and how our own experience and performance have been unfavorable in these markets,” the spokesperson added. “The smaller overall market size and shorter term, higher risk profile within this market segment continue to suggest we cannot broadly serve it on an effective and sustained basis.”