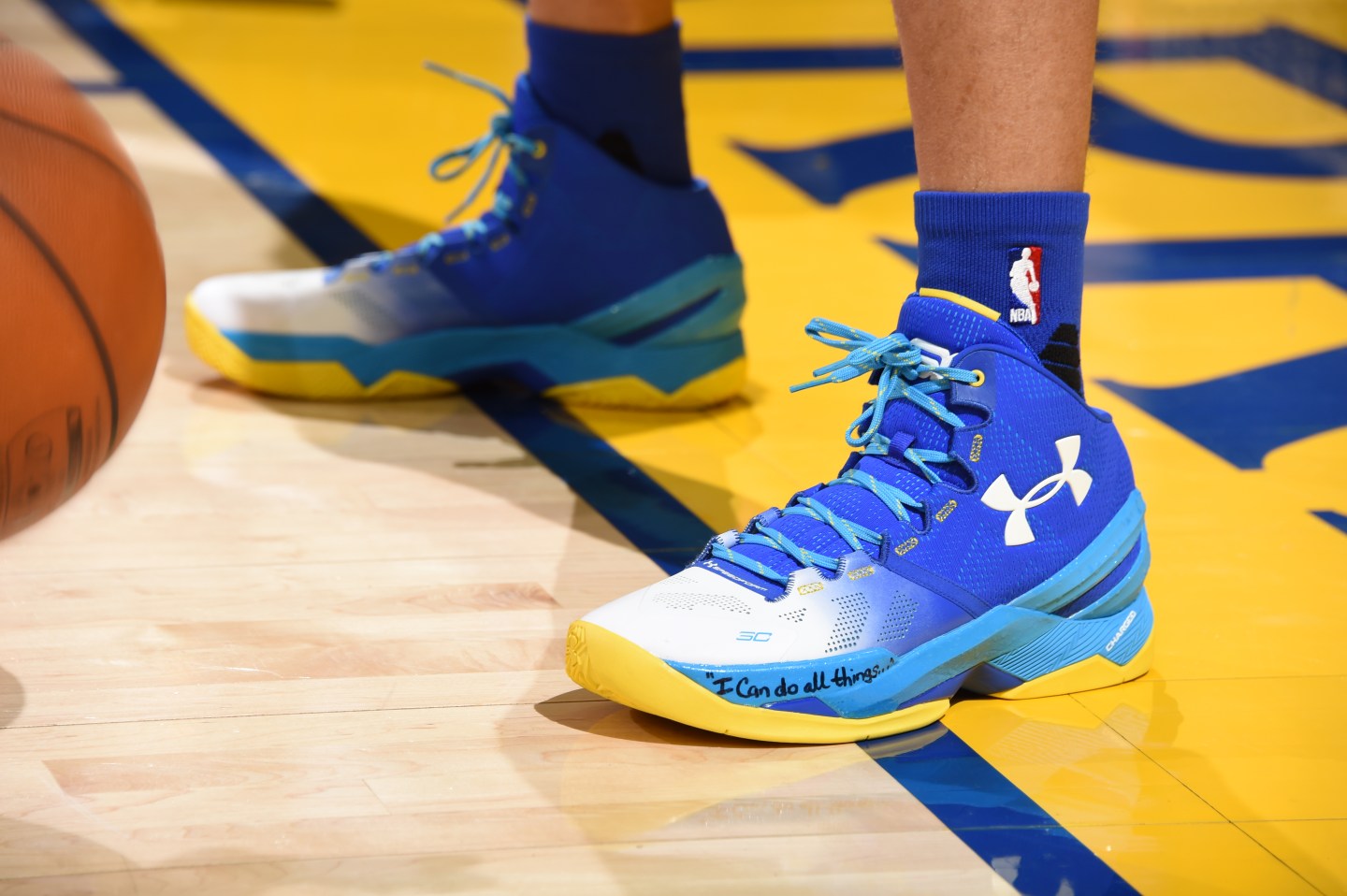 OAKLAND, CA - MAY 26: The sneakers of Stephen Curry #30 of the Golden State Warriors before the game against the Oklahoma City Thunder in Game Five of the Western Conference Finals during the 2016 NBA Playoffs on May 26, 2016 at ORACLE Arena in Oakland, California. NOTE TO USER: User expressly acknowledges and agrees that, by downloading and/or using this Photograph, user is consenting to the terms and conditions of the Getty Images License Agreement. Mandatory Copyright Notice: Copyright 2016 NBAE (Photo by Andrew D. Bernstein/NBAE via Getty Images)
Andrew D. Bernstein NBAE/Getty Images

Not even Stephen Curry’s star power could offset the damage done by The Sports Authority’s bankruptcy.

Shares Under Armour (UA) dropped 6% in early trading Wednesday, after the sports apparel maker revised its expected full year guidance downward, citing The Sports Authority‘s bankruptcy. When news of a potential bankruptcy broke earlier this year, Under Armour noted that the event would not likely impact its sales and reiterated its full year guidance.

But now that The Sports Authority, one of Under Armour’s wholesale customers, has decided to liquidate rather than restructure, the apparel maker has shifted full year revenue guidance down to $4.925 billion versus its previously reported estimate of $5 billion—a decrease of $75 million.

Under Armour previously upgraded its 2016 outlook to $5 billion in revenue from $4.95 billion in April. Under Armour was aware of Sports Authority’s bankruptcy at the time.

“While The Sports Authority’s bankruptcy impacts our 2016 outlook, our brand’s momentum is stronger than ever as we continue to see growth and increased demand across all categories and geographies,” said Kevin Plank, Chairman and CEO of Under Armour in a press release statement. “This one-time event will not impact our focus on making the best decisions for Under Armour through investments that protect and drive our growth.”

The company has also undertaken a series of high-profile contracts with celebrities including Stephen Curry and Dwayne “The Rock” Johnson in the past few months. The Golden State Warrior point guard in particular has been credited with driving up both Under Armour’s market cap and shoe sales.