An Inside Look at Google’s Car Strategy 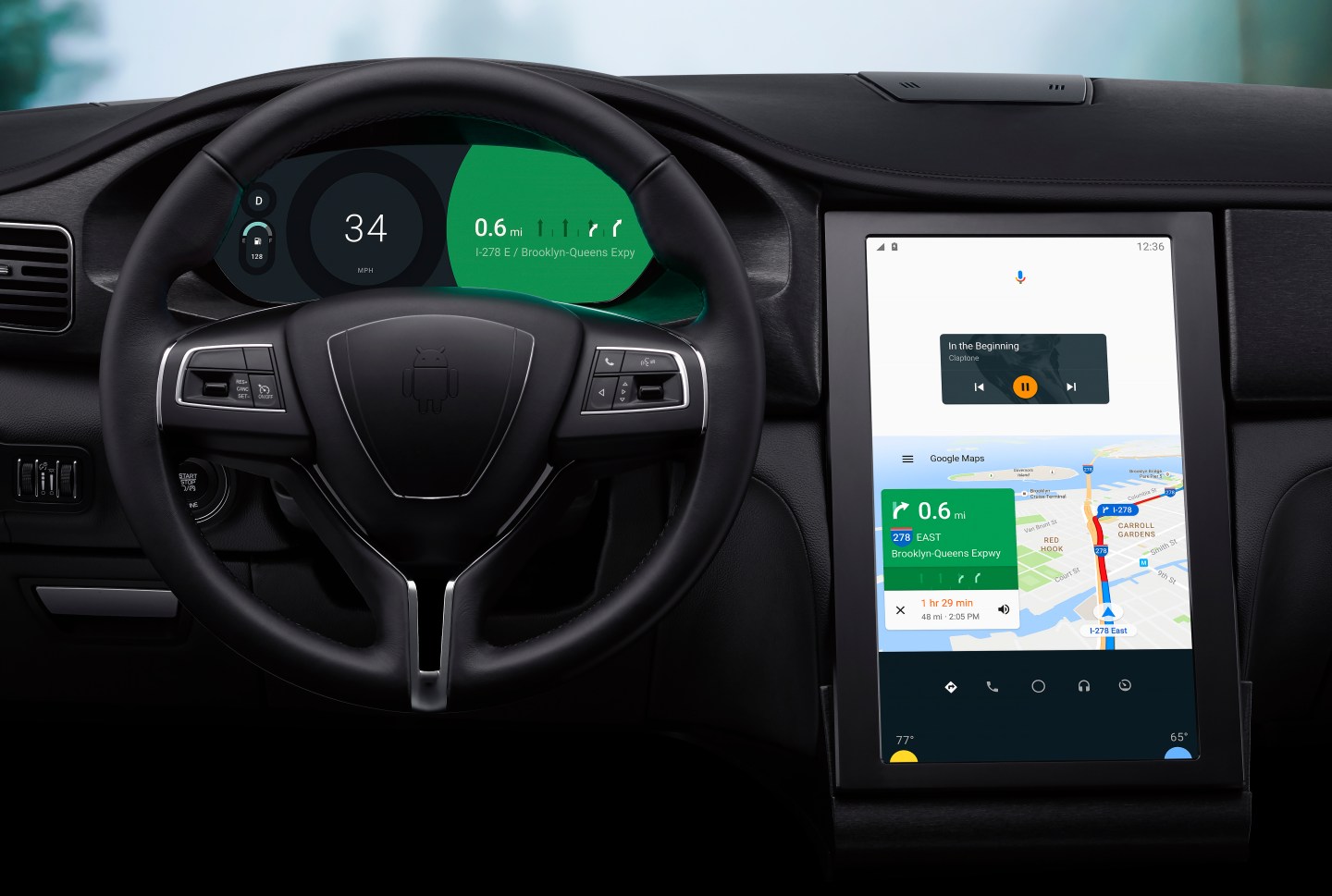 Google’s plans for the car were overshadowed at its developer conference last month by new product announcements like Google Home, software improvements such as Android Instant Apps, and a smarter version of Google Now called Assistant. The car was only referenced in passing during the keynote by CEO Sundar Pichai and got a brief mention from Dave Burke, vice president of engineering for Android, the operating system.

Yet despite the lack of attention, the company’s push into automotive is noteworthy because if automakers bite, Google (GOOG) and the services it helps deliver will be even more integrated into the daily life of consumers. Imagine, all that data.

Fortune sat down with Patrick Brady, director of engineering for Android Auto. We dug into the company’s recent announcements around Android Auto, an in-car software platform that brings the functionality and feel of a smartphone to the vehicle’s central screen. More importantly, it offers a tweak to the next generation of Android enabling automakers to more easily use the open source operating system to create a customized, turn-key infotainment system that controls HVAC, navigation, AM/FM, media streaming, Bluetooth calling and media streaming, multi-channel audio, and digital instrument clusters.

First, a quick education on Android Auto versus Android. Android Auto is in cars, but it’s not an operating system; it’s the HMI layer—or a secondary interface—that sits on top of the operating system. Android is a mobile operating system that runs on Linux and is designed for smartphones and tablets. The new version of Android, currently called N until it gets an official name, has been updated to be dashboard-friendly, meaning it makes it easy for automakers to use it to create an infotainment platform for their cars.

This interview was edited for length and clarity.

Why did Google make these changes to Android? If automakers choose to use Android as the operating system for its infotainment operations how will it, or can it, co-exist with Android Auto? What’s the vision?

In 2013, we looked to get into automotive, and we did it for a couple of reasons. People spend a lot of their time in the car. And if you look at all of the screens people interact with on a daily basis, the car screen is a really important one.

Then we looked at the state of automotive software and connected services in cars, and we knew we could do better.

Automotive is a tough nut to crack in terms of how to bring services to market because it’s a heavily regulated industry, it’s capital-intensive, and it takes a long time to bring a car to market or even new software in a car. We were convinced that if we wanted to innovate at pace in automotive, we needed a platform to do that.

Android Auto has a lot of advantages. It’s a personal experience and it’s one that you bring with you into the car, and when you leave, you take it with you. But it has limitations because it’s just the HMI layer. So our goal is to create this seamless experience where you have connected services in the car.

We think ultimately you need to have a single software experience across the board, and that building Android into the car is a pretty great way to do that.

Why even offer this? It’s an open source platform, so what’s the benefit to Google?

We had the same question back in 2005 with mobile when people said Microsoft is making money licensing Windows, why the heck would you waste all this time and money building a complete open source platform and give it away for free?

Our long-term bet is on building services that consumers are going to love. At Google, you see us open sourcing and giving away a lot of our platforms because we can’t innovate as an industry, we can’t innovate at pace, unless we have a great platform.

If we get Android into cars, automakers can take Google services and put them or other services from Facebook, or Spotify, or whoever, in the car much more easily than if they didn’t a have system platform.

We think these platforms are much better off if they can be supported by an entire industry ecosystem and then anyone can add and innovate at a much faster pace. That’s really the goal.

What’s the next step then? Has there been any discussion going beyond infotainment?

Right now, we’re really focused on infotainment and connected services. At Google, we feel like we have a lot of technology and expertise that we could bring to the table in areas of advanced driver assistance systems and sensors. But there is still so much we can do now if we focus on infotainment.

The speech recognition is a good example (of an infotainment service). Sundar hinted at this yesterday in the keynote about the Assistant in the car. The car is definitely an area where it has to be a voice-first experience. We think there’s so much we can do on that front right now, that’s what we’re focused on.

But later down the road, yeah there’s definitely a lot of exciting advancements in ADAS that we think we can add a lot too. It’s not off the table.

The auto industry has been asking for this as far back as 2010. We had automakers approaching us saying please bring Android to automotive. For the carmakers, it’s a pretty great solution because it’s a complete platform. You have all the things you would need in an operating system, and it can do all sorts of things, and you can customize it.

We told them, “Don’t wait for us. It’s open source; have at it.” Many cars today are already shipping on Android. They’re using Android under the hood, and you wouldn’t know or recognize it necessarily. But the carmakers had a lot to do to make it work well for the car because, at the time, it was designed for mobile phones.

For more, read: Google Wants to Do More Behind Your Wheel

How easy will it be for QNX, which licenses its Unix-like operating systems for infotainment and safety functions, to operate on Android? Will QNX be a competitor or a partner?

In many ways, you could say Android and QNX are competitors, but in other ways they’re very complementary.

If you want an advanced ADAS system, I would not advise you to choose Android today. That’s not what Linux and Android were built for. QNX runs in so many safety critical systems from airplanes to automotive, I think they could be quite complementary, and I think you will see instances where cars run both.

Even though Google’s self driving car project is separate from Android, I wonder if there are any conversations about what the operating system for those self-driving cars might be? Is there talk of bringing the two together eventually?

There is certainly no conversations about merging them or anything like that. We definitely do talk with them. I mean even in self-driving cars, you want air conditioning and things like. So they will need to figure out, or their partners will, a platform to power all of that.

We talk to them, but not in anyway about merging.