Google Wants to Do More Behind Your Wheel 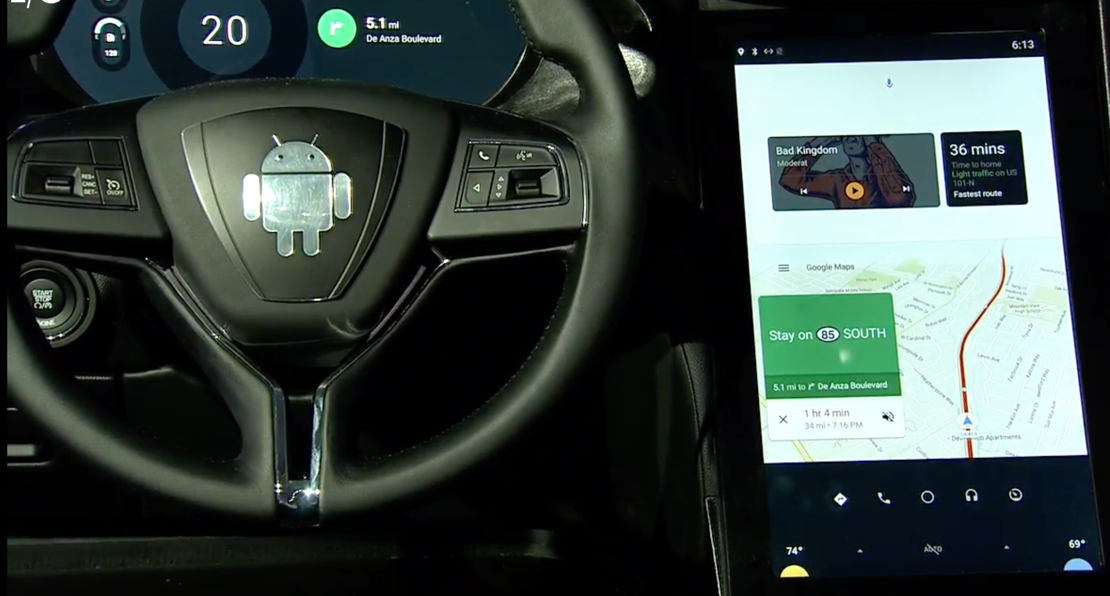 Google is pushing deeper into the automotive industry with an update to Android Auto that will add popular features and make the connected car platform accessible to users who were previously shut out of the app. And that’s just Android Auto news.

The search engine giant also wants the next generation of Android to be the operating system that runs everything in future cars, including the heating and cooling, navigation, and music—even the speedometer, fuel gauge, and other parts of the digital instrument cluster.

At Google’s annual developer conference on Wednesday, the company announced a number of new features to Android Auto, an in-car software platform that brings the functionality and feel of a smartphone to the vehicle’s central screen. Google (GOOGL) said it is adding the popular crowdsourcing map Waze to Android Auto as well as “hotwording,” which lets drivers activate voice functionality by saying “OK, Google.”

Users will soon be able to operate Android Auto wirelessly by syncing to the central screen through a car’s built-in Wi-Fi network. Since Android Auto launched last year, users have had to plug their smartphones into the car’s USB port to integrate the phone’s music, maps and navigation, and selected apps onto the central screen. All of these features will be rolled out over the next several months, Google said.

The company also said it will now allow major automakers to use the Android Auto platform to build their own apps for car-related services. Hyundai is the first to launch an Android App, which adds vehicle-specific functionality like access to roadside assistance and car diagnostics.

Perhaps the most immediate impactful change is that Android Auto will now be available to anyone, even if they drive a car that isn’t compatible with the platform. Audi, BMW, GM (GM), Kia, Ford (F), Hyundai, Volvo, and Volkswagen all have signed partnerships with Google (and rival Apple (AAPL) in many cases) to add their connected car platforms to new model cars. But that has left millions of other vehicles, and their drivers, without access to the platform.

Google also said Wednesday it’s bringing the Android Auto experience to the phone screen, no new car required. Users will have access to all the same features as in-car Android Auto, including voice-enabled calling, media, messaging and navigation with a new driver-friendly interface. The on-phone experience will be available later this year with an update to the Android Auto app.

Here’s what else Google announced at its annual developer conference:

Google is also making a significant long-term play in automotive. It’s tweaked the next generation of Android so that automakers can use the open source operating system to create a customized, turn-key infotainment system that controls HVAC, navigation, AM/FM, media streaming, Bluetooth calling and media streaming, multichannel audio, and digital instrument clusters.

Android Auto is in cars, but it’s not an operating system; it’s the HMI layer—or a secondary interface—that sits on top of the operating system. The new version of Android is essentially dashboard-friendly, meaning it makes it easy for automakers to use it to create an infotainment platform for their cars.

Google partnered with Qualcomm, which is supplying the chips to power the system, to demonstrate at the developer conference what this might look like. The companies retrofitted a Maserati Ghibli luxury sedan with a vertical 15-inch touchscreen that displays a new infotainment user interface and apps from Google and the Android developer ecosystem.

For now, the Android in-car infotainment system is just a concept. Automakers have not made any formal agreements to use Android. A Google spokeswoman told Fortune that automakers were actually pushing for this. If they do bite, that means companies like QNX, a subsidiary of Blackberry (BBRY) that has largely dominated the infotainment software market, faces a new huge competitor.