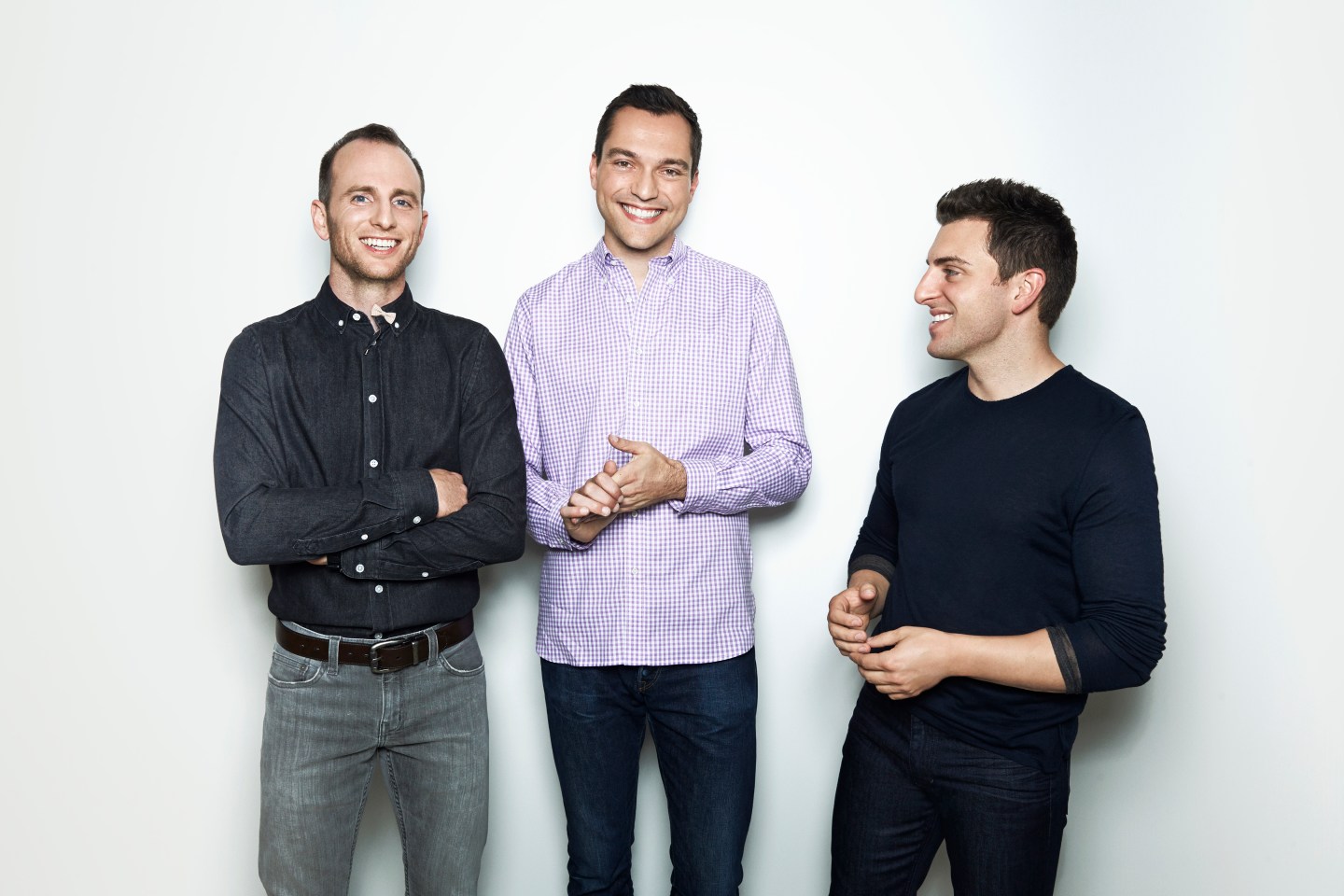 Airbnb’s foes have accused the home-sharing platform of exacerbating the housing crisis, allowing illegal hotels to operate on its platform, and, most recently, enabling racial discrimination by its hosts. But the critics can’t claim that Airbnb’s cofounders are unwilling to share their wealth with others.

On Wednesday, the cofounders of Airbnb joined the ranks of the Giving Pledge, a select group of billionaires who have committed to give the majority of their wealth away.

The Airbnb foursome—each cofounder is said to be worth $3.3 billion—are the only representatives of the tech unicorn economy to join the ranks this year. Other new signatories include Marc and Lynne Benioff and Saudi Prince Alwaleed Bin Talal. (Here’s the full list of new members.)

Under the terms of the pledge, which was established in 2010 by Bill and Melinda Gates and Warren Buffett, the four will give away more than 50% of their wealth either in their lifetime or in their will. The Giving Pledge includes some of the biggest titans of the last century, including Paul Allen, Michael Bloomberg, Barry Diller and Diane von Furstenberg, Ted Turner, Arthur Blank, Leon Cooperman, Charles Feeney, T. Boone Pickens, as well as newer fortune-builders like Sheryl Sandberg, Mark Zuckerberg and Priscilla Chan, Elon Musk, Spanx founder Sara Blakely, and Chobani founder Hamdi Ulukaya.

“One of the goals of the Giving Pledge is to encourage people to start giving early, so it’s great to have more young people joining,” Bill Gates said in an email to Fortune. “Airbnb is still growing as a company, but Brian, Nathan and Joe are sending an important signal by getting involved in philanthropy now.”

It also marks the first time all the co-founders of a company have pledged at the same time. “It shows an inspiring commitment from all of them,” Gates said.

The Airbnb cofounders’ path to the Giving Pledge followed a familiar pattern. The size of their wealth started to sink in, which gave them the sense that they should make a conscious decision on how to use that money. All the while, they were increasingly exposed to Gates, Buffett, and others in the upper echelons of philanthropic circles.

Airbnb CEO Brian Chesky says he had been thinking about giving for the past few years, but it was in January 2014, when Bill Gates asked him to join him in a roundtable on philanthropy at Davos, that he started to learn more about the pledge. Subsequent conversations with Warren Buffett, whose advice he had sought on other matters, and Mark Zuckerberg, who Chesky calls a friend and “the leader of my generation generally, from a tech perspective,” convinced him. One point from Buffett, he says, particularly hit home: beyond a certain point, the utility of additional wealth for yourself is zero, but for society its utility is great. (Giving away 51% of $3.3 billion still leaves one with $1.6 billion.)

Gebbia had seen Buffett and Gates speak last year at a summit on philanthropy and described it as an “impressionable moment.” He had the chance to talk with Buffett and was “blown away by his earnestness and compassion…. I thought I was talking to a Jedi Master of philanthropy.”

The Blecharczyks started to think about it a few years back, when Sequoia Capital arranged for Gates to give a talk about philanthropy for its portfolio companies at Airbnb headquarters. “It was really inspiring, but one of Bill’s key messages was to start thinking about it early, even if you aren’t ready to give yet,” Nathan Blecharczyk says.

“It was very easy for the two of us” to make the decision, says Elizabeth, who is a neonatal hospitalist (a physician who works exclusively in a hospital) and clinical instructor in pediatrics at Lucile Packard Children’s Hospital at Stanford.

Nathan Blecharczyk says Gates’ involvement in the Giving Pledge was meaningful to him. “My interest in computers and the internet really took root in the 90s, back when Bill Gates and Microsoft were at the top of what [was] happening,” he says. “So the fact that it was created by him really got my attention.” And Elizabeth says Melinda Gates had long been a role model for her. “I see many parallels between her life and my own,” she says, citing shared values, a similar secondary education path (they both attended Catholic schools), and Gates’ role as a champion of women and girls.

While the founders are united in joining the pledge, their giving will be individual. “Personal philanthropy is personal,” Chesky says.

All four say they plan to take their time formulating their giving strategy, but they have already identified some specific areas of interest.

Chesky says he wants to help expose more younger people to entrepreneurism, a mission inspired by his own experience. “My parents exposed me to a lot of things, but the one thing I wasn’t exposed to was entrepreneurism. I never met a CEO and I didn’t think that was possible.” It’s conceivable, he muses, that in a weekend or a week of exposure, the entire trajectory of a younger person’s life could take a different path. He intends to target “self-directed” younger people regardless of socioeconomic background. “I think it’s a pretty democratic idea,” he says.

The Blecharczyks say their donations will focus on two broad themes—children and “transformative ideas”—and note that areas of interest within that include education, scientific research, medicine, space exploration, conservation of the planet, and more effective governance.

All four say they plan to take their time. “The commitment is not made slowly—we’re ready—but how we want to give is something we want to be careful about,” says Chesky. “It’s a huge responsibility. You want to make sure you’ve thought it through.”

Of course, the founders’ net worth is currently on paper and pegged to the company’s $25.5 billion private valuation. And they are aware of the speed and surreal nature of their rapid rise. “I never even imagined a letter quite like that before,” says Gebbia of the experience writing his pledge letter.

“The whole thing is pretty humbling,” says Chesky. “Thinking about the responsibility of a pledge is a pretty high-class problem when not so long ago I was trying to pay rent.”

None seem too concerned about the heightened attention that comes with the public commitment. “I’ve always believed that you should [be public about giving], such that you can be very public about your values and what you stand for,” says Chesky.

And is it safe to assume he won’t be giving any of his funds to the hotel lobby, the constituency that has most vigorously opposed Airbnb and continues to fight every day to curb its expansion?

He laughs. “Warren Buffett said you should pick things that don’t have a natural funding constituency,” he says. “And I think they have plenty.”