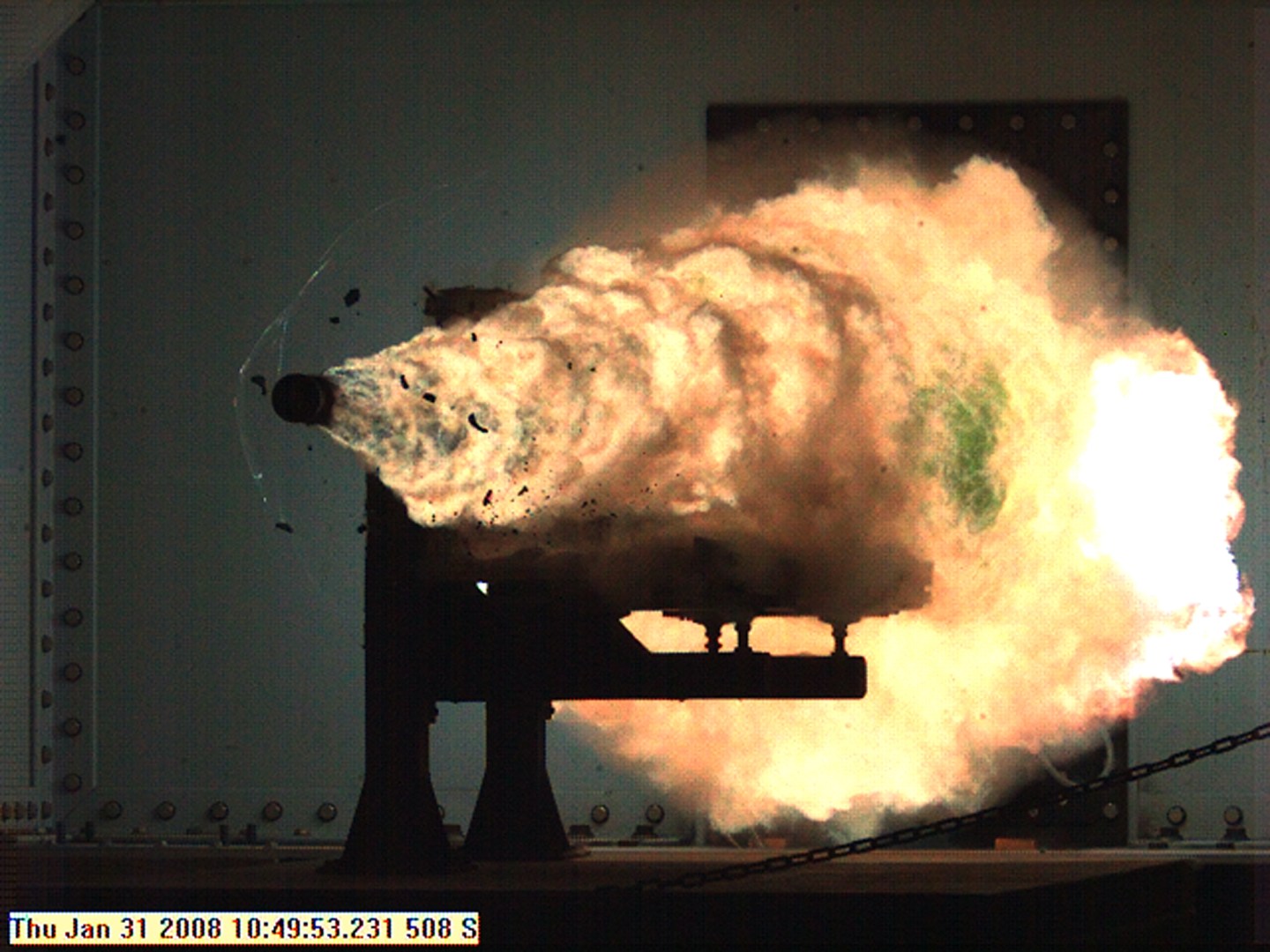 080131-N-0000X-001 DAHLGREN, Va. (Jan. 31, 2008) Photograph taken from a high-speed video camera during a record-setting firing of an electromagnetic railgun (EMRG) at Naval Surface Warfare Center, Dahlgren, Va., on January 31, 2008, firing at 10.64MJ (megajoules) with a muzzle velocity of 2520 meters per second. The Office of Naval ResearchÕs EMRG program is part of the Department of the NavyÕs Science and Technology investments, focused on developing new technologies to support Navy and Marine Corps war fighting needs. This photograph is a frame taken from a high-speed video camera. U.S. Navy Photograph (Released)
John F. Williams U.S. Navy

The Navy’s newest and most transformative weapon, known as a railgun, is getting closer to deployment. Long confined to the speculative pages of science fiction novels, railguns use electromagnets to propel hardened projectiles at 4,500 miles an hour, and can destroy heavily armored targets at a range of up to 125 miles. Someday, they may also be able to shoot down incoming missiles.

The Navy is currently testing the first of three futuristic Zumwalt-class destroyers designed to carry the guns, and Raytheon (RTN) has begun delivering the weapons’ power systems, known as pulse power containers.

As the Wall Street Journal explains, the railgun blows past the power limitations of guns powered by gunpowder, with five times the range and impact of the Navy’s largest conventional guns. Its smaller projectiles also mean a ship could carry ten times more railgun rounds than missiles, and the rounds are much less expensive than missiles.

The railgun has come a long way, though bigger advances are still on the horizon. Early experimental models could only fire once before stress made their barrels unusable, but the Navy tells the Journal that it will soon be able to build a railgun that can fire 1,000 times from a single barrel. And a nearly complete guidance system promises to use computing advances from the private sector to steer railgun projectiles using GPS.

According to the Journal, the tactical implications of railguns could be huge. With declining military budgets limiting America’s international presence, the weapons could provide a less expensive deterrent than conventional forces, particularly against Russia in Eastern Europe and China in the South China Sea. According to Deputy Secretary of Defense Robert Work, the railgun is potentially effective against “airplanes, missiles, tanks, almost anything.”

For more on military tech, watch our video.

The most tantalizing tactical possibility would be using railguns to shoot down incoming missiles. Though those capabilities are years away, an interesting parallel has been achieved in recent months by SpaceX, which can now guide a rocket moving at extremely high speed to a landing on a relatively tiny, and not entirely stationary, barge.